It’s been a year, but it’s time to start a new letter!  There’s only five “D” countries, so this will probably take a little less time.  This week, we start with the other “Congo” country, the Democratic Republic of the Congo. (Which was renamed “Zaire” from 1965 until 1997.)

As we pointed out a few weeks ago when we did the Republic of the Congo, the DRC was principally oppressed by Belgium, rather than France who did the oppressing across the river. However, there are a lot more similarities than differences, to the point that they two countries share the same national dish, which we have chosen to prepare for this meal, rather than last time.

That national dish is Poulet à la Moambé, a chicken stew made with palm nut cream.  We’ve encountered palm nut oil repeatedly in African recipes, but this stuff is a bit different.  For one, it comes in a can, rather than a bottle: 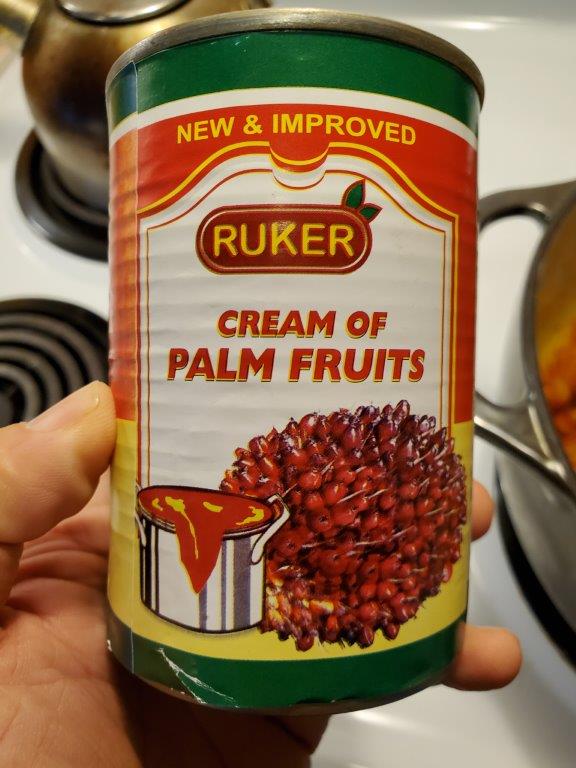 For a second, the actual product looks very different, but we’ll get to that in a second.

First, let me talk about the exact recipe we chose to use.  There’s a number of versions of this recipe online aimed at western cooks.  It’s not surprising, because (spoiler) this stew is REALLY GOOD.  So we started by reading those.

Unsurprisingly, nearly all of them call for peanut butter rather than palm nut cream, because it’s a much more readily available ingredient in North America.  We would likely have picked one of those until I ran across this simple comment in response to one of the more promising:

“That’s a lovely recipe but not moambe.”

To their credit, the blog authors (I’ll link the whole post below) respectfully entered a conversation with the commenter, who ended up sharing their full recipe for authentic moambé chicken made with palm nut cream.  And THAT’S the one we’re making today – one we literally transcribed from a comment thread.

We start the recipe by sweating some onions and garlic in red palm oil. (We haven’t gotten to the cream yet.) 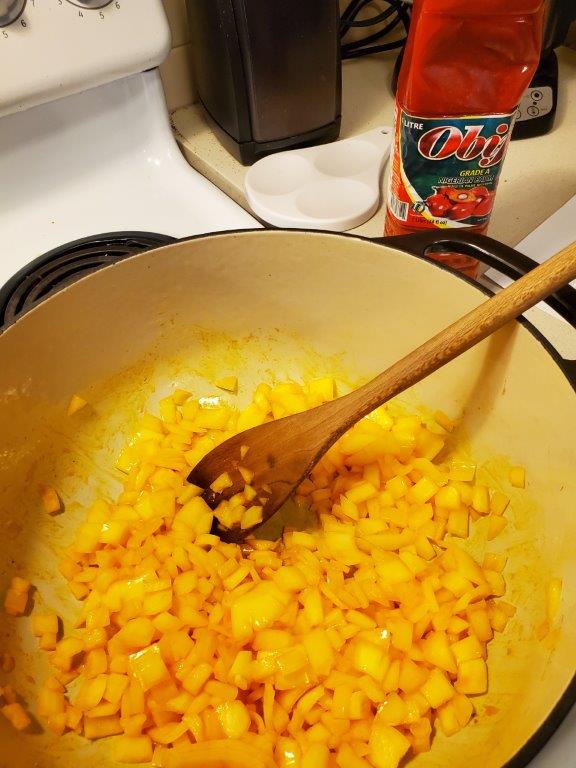 Once those are translucent, we add some cumin, water, thyme, a scotch bonnet pepper, and the cream which, as it turns out, has the consistency of natural peanut butter. 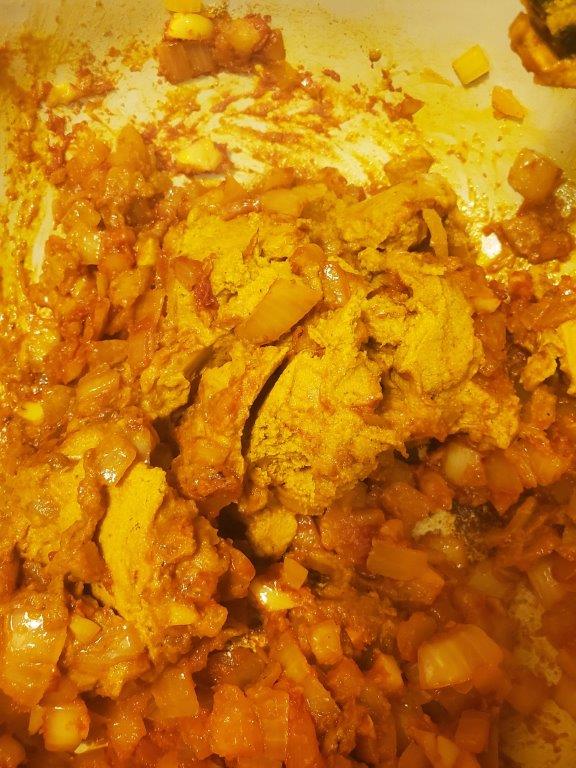 (Not the best picture, sorry.)  After the moambé has melted, the sauce is left to simmer for a LONG time. All of the timings in this recipe are somewhat vague, but 90 minutes seemed a good approximation.  At the end of that period, a thick layer of oil has separated, and is floating on the top of the sauce. 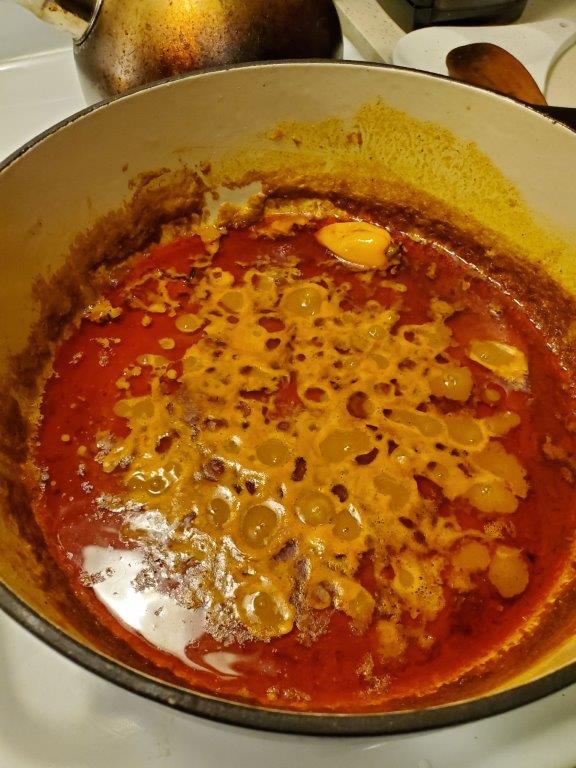 The next bit was rather annoying – we had to skim off the oil without bringing too much of the very thick underlying sauce with it.  This oil was used to sear our chicken pieces on both sides. 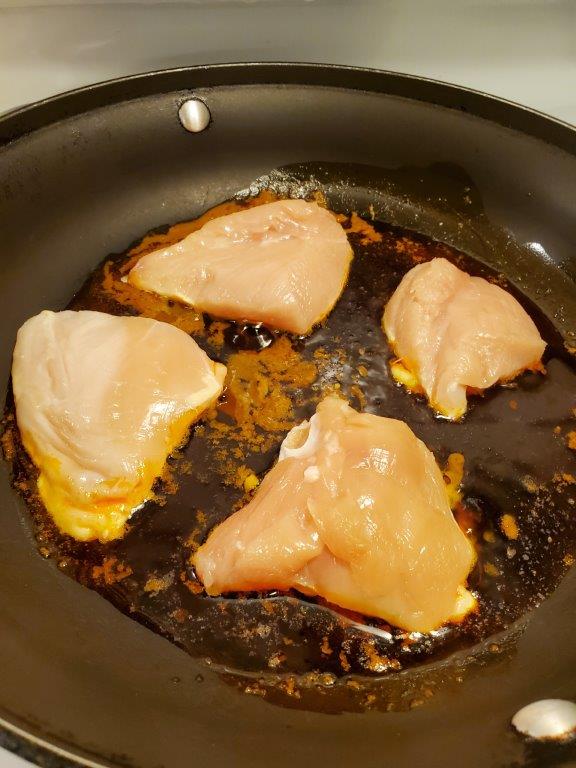 Once they have a good color, they get thrown back into the pot of sauce, and left to simmer for as long as you can possibly stand it, while your apartment fills with the impossibly delicious smell of this stew. 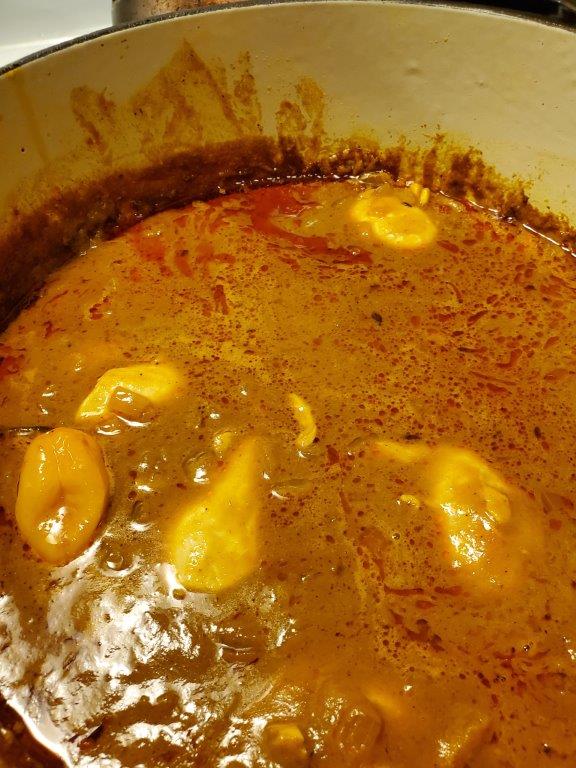 Note the happy little Scotch bonnet pepper floating around in there.

While we’re pretty comfortable with the authenticity of this dish, the next one is a bit more of a question mark.  Lots of African recipes call for chopped leaf vegetables. There’s always a question, however, as to which ones are the best choices.  In the past, we’ve used spinach. However, for this one, we wanted to try amaranth, which is also a staple vegetable in Africa.

However, we ended up with a version we bought at a Chinese supermarket, marked “Xian Cai”.  Is this the same amaranth that is grown in Africa?  Is it authentic to the DRC? I must confess, we really don’t know. The recipes calls for “wild spinach”, which the African grocer MIGHT have had in the freezer, but we decided we’d rather sacrifice certainty for taste.

But let’s get on with it.  We’re making a variant of a dish called “Fumbwa”, which would normally involve dried fish.  We varied it by leaving out the fish, but otherwise left it basically the same.

It’s a pretty simple preparation. First, you chop the leaves.  The Chinese amaranth we bought has pink streaked through the leaves, and is quite attractive: 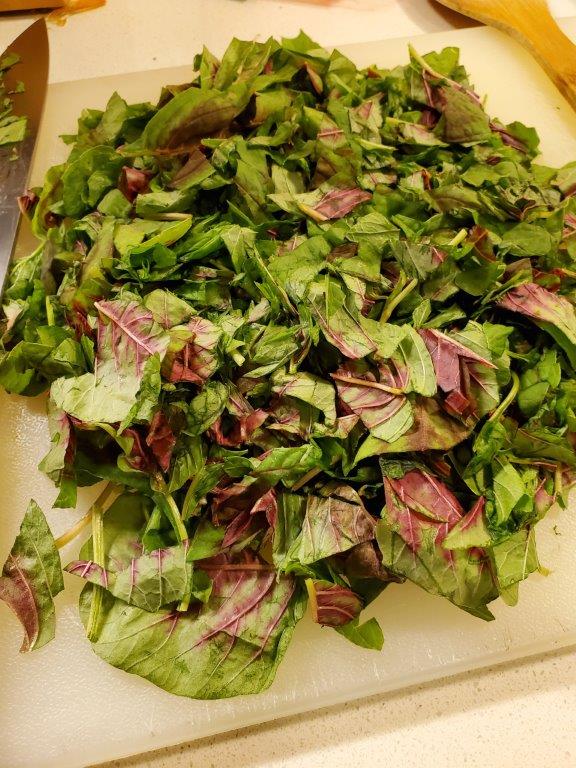 You can see why we decided to go with these rather than frozen spinach leaves!

The leaves are simmered in water with a bit more palm oil, scallions, garlic, tomatoes, and a stock cube. 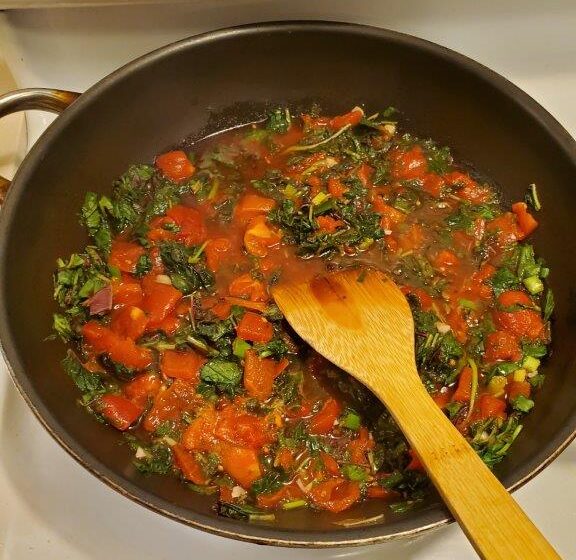 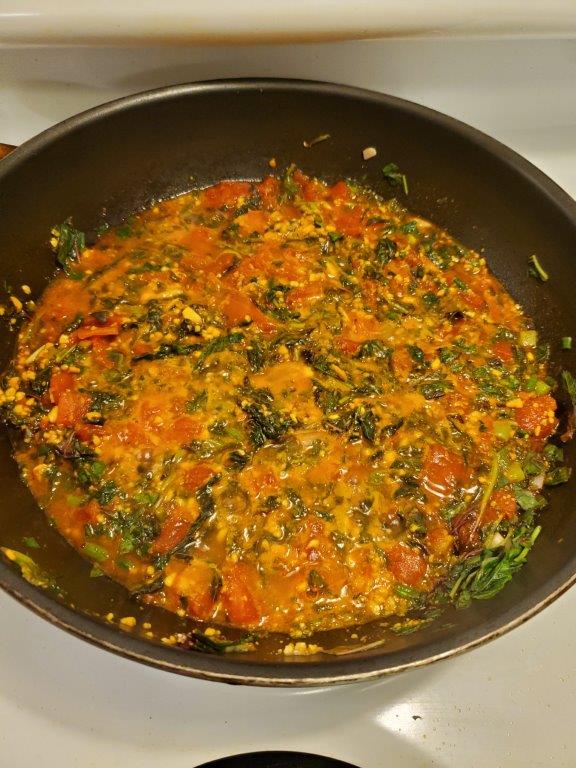 And finally, we made fufu. Again. 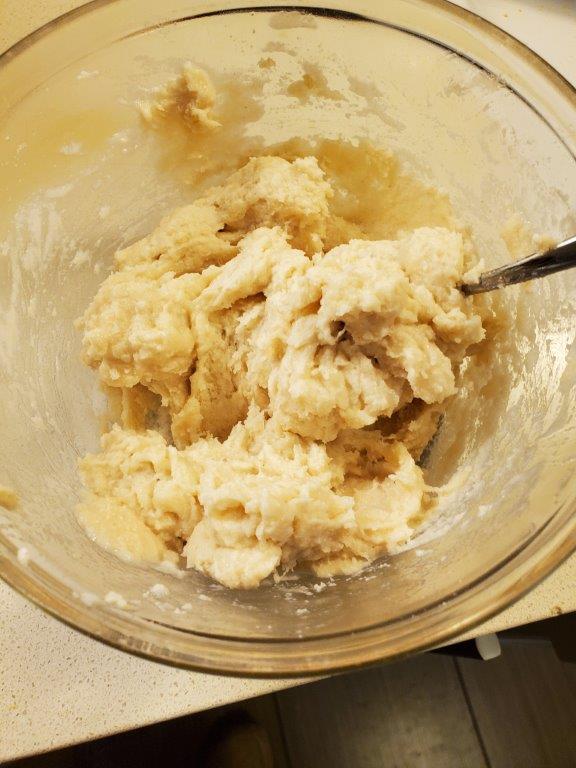 Fufu is an incredibly important subsistence food throughout Africa.  It’s hard to understate how critical it is for meeting basic caloric requirements for millions of people. Very few Congolese could afford to make the chicken stew we are making here on a regular basis – fufu is truly a critical part of the food ecosystem on the continent.

But man – am I terrible at making it appetizing.  We tried adding butter and salt to the cassava flour and water paste this time.  It didn’t seem to help.  As always, it functioned as a reasonably adequate way to move sauce from plate to face, but since we ARE privileged enough to have chicken available, we mostly stuck with that and the amaranth stew. 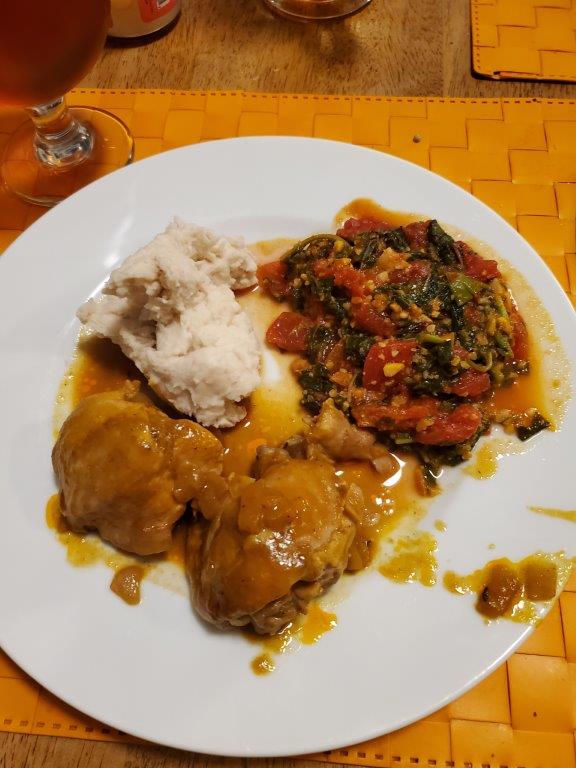 Doesn’t that look pretty? It’s not JUST about appearances, of course, but it doesn’t hurt that the colors on this plate are gorgeous.

And you know what?  It doesn’t just look good – it’s delicious! The chicken was fall-apart tender, and had absorbed the deliciously not-quite-peanut flavor of the moambé and the other seasonings.  And as tasty as the chicken was, the amaranth almost stole the show – the peanuts, tomatoes, and greens together made for a tart, salty, and crunchy combination that was just dynamite.  The one change I would make for next time would be to slice the Scotch bonnet, rather than leaving it whole, to try and kick the heat up another notch or two.  (It was great as it was, but it would ALSO be great spicier.)

This is definitely one of our favorite African national dishes so far, and we certainly hope DRC can find the stability and development it needs for more of the population there to be able to enjoy it on a regular basis.

Next up, we return to Europe to visit Denmark!

Recipes:
Moambé Chicken (This is the blog from which we copied the recipe out of the comments.  I’ve transcribed the version we used in a more traditional format below.)
Fumbwa (Congolese Spinach Stew)

1. Sweat onions in palm oil with a good amount of salt at medium high in a heavy pot, such as a Dutch oven.
2. Once the onions are translucent, add garlic and cumin.  Cook until fragrant.
3. Add tomato paste and allow to darken
4. Lower heat, add thyme, entire can of Palm Nut Cream, stock cubes, and about 3/4 L water until cream is completely covered.
5. Cook, stirring, until the cream has melted.
6. Add water until the mixture has the consistency of brown soup.
7. Add hot pepper if desired. (Dan: consider slicing for maximum effect.)
8. Allow to come to boil and cook for ~45 minutes until thickened a bit.
9. Lower the heat, partially cover, and cook for a further 45 minutes, adding water as needed to prevent it becoming too thick. This would be a good time to take your chicken out of the fridge so it comes up to room temperature.
10. Apply a little salt to the chicken and cut breasts into large pieces. Remove skin if present.
11. The moambe should change smell somewhat, oil should be visible on top.  Be careful, as the hot oil can spatter, burn, and stain.
12. Carefully skim the oil from the sauce.
13. Using the oil, brown the chicken on all sides.
14. Taste the sauce for salt and pepper, then add the chicken.
15. Cook until breasts have fallen apart and other cuts are done. (ideally, simmer as long as possible here.)