We return to Africa this week, for a dish that seems to be universally acknowledged as the national dish of Cameroon – Ndolé, or bitterleaf stew.  Like most of these dishes (or, for that matter ALL dishes everywhere) there are a variety of recipes, but the key ingredient in this is… wait for it… bitterleaf.

Bitterleaf, or Vernonia amygdalina, is a member of the daisy family. It smells more like tea than anything else. Also, it is absolutely not to be found in Lansing, but fortunately isn’t too expensive on Amazon.

Other specialty ingredients this go-round include dried crayfish, slaked limestone, and a package which took pains to specify that the contents were not intended for people with fish allergies. Can you guess which ingredient in this picture is probably a poor choice for the poisson averse? 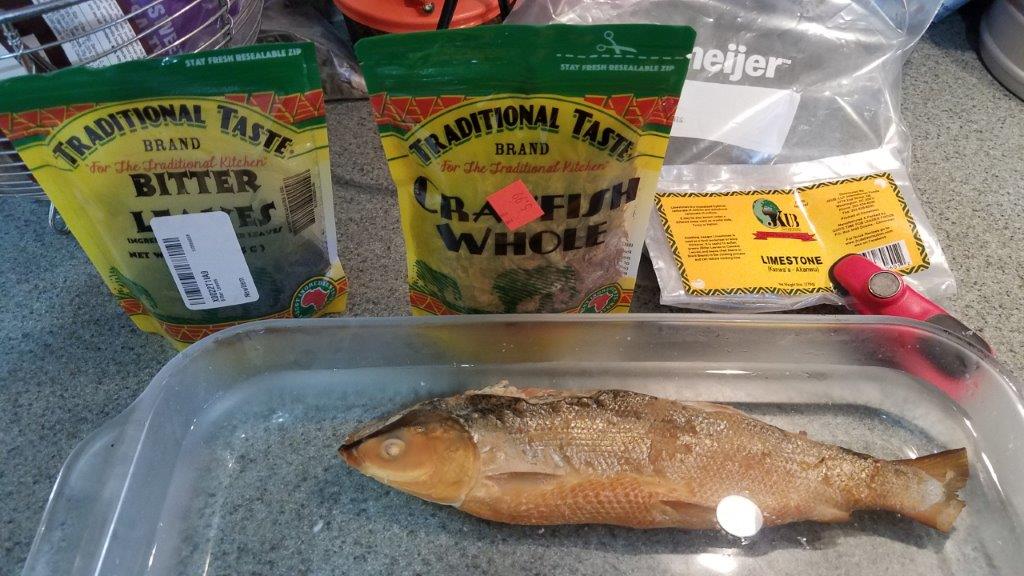 Fortunately, neither Leigh or I are allergic to fish, so into the pan our (checks package) milkfish would be going. So what if it’s not native to Cameroon – it’s a dried smoked fish. Close enough!

To start the process, three different things had to be soaked overnight, the leaves, the fish, and a quarter cup or so of peanuts. To start the cooking process on the day of, the leaves get boiled for an hour or so in a big pot with the limestone.  A word on the limestone – this is calcium hydroxide, and it’s the same ingredient used to make Mexican hominy, Chinese century eggs, and a number of other food processes.  I suspect we may need to come back to this bag later, and I doubt it’s going to go bad.

Once the leaves are boiled and drained, the next step is to to start onions and sliced beef cooking in one pot and the fish cooking in another. 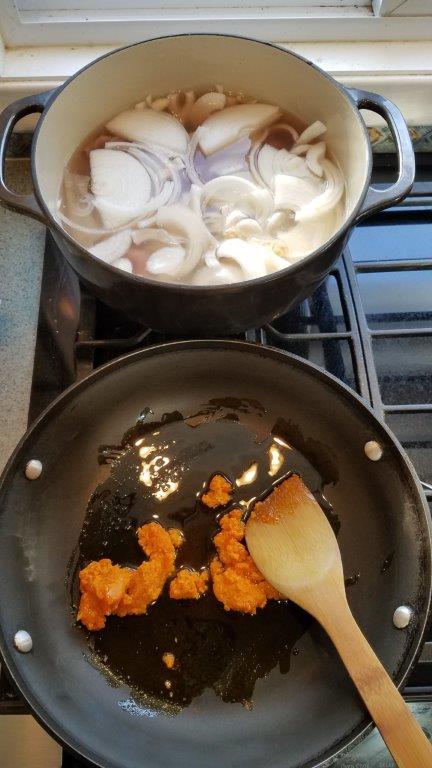 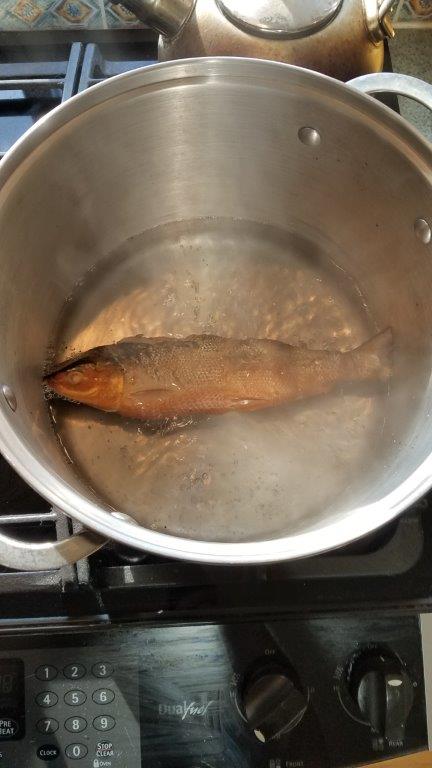 The third pot visible in the pictures is for the seasoning that goes into the stew, which consists of red palm oil (ubiquitous in our African meals thus far), ground peanuts, and habanero peppers. And the only reason we used habaneros is that their even deadlier cousin, the Scotch Bonnet, couldn’t be located. The resulting oily, spicy, peanut sauce was screamingly hot, but very tasty.

From here, the recipe just consisted of adding the various things into the stew at the right times for them to cook. So first the sauce, fish, and crayfish, then the leaves, and finally shrimp, which had the shortest cooking time. Incidentally, the English name for Cameroon comes from the Portuguese colonial occupiers’ word for “shrimp,” camarones. 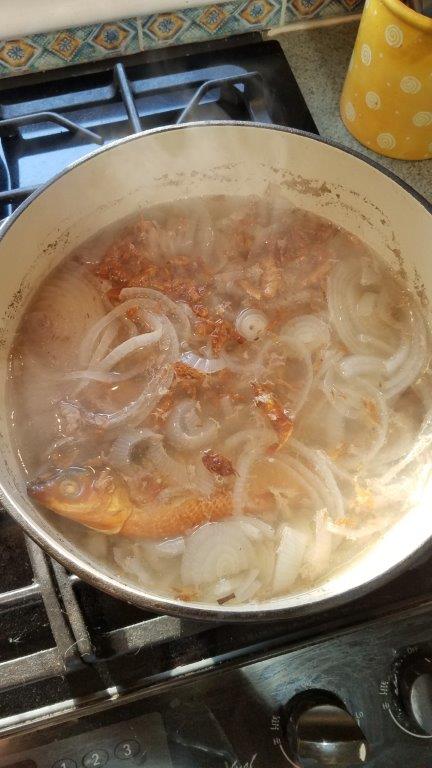 In addition to the stew itself, we also made yet another cornmeal mush variant, and a delightful condiment called pepe. And by “delightful”, I mean “let’s toss in about 5 more habaneros to the mix.”  It’s super tasty, and I’ve been spreading it on sandwiches ever since… but only in very small quantities. 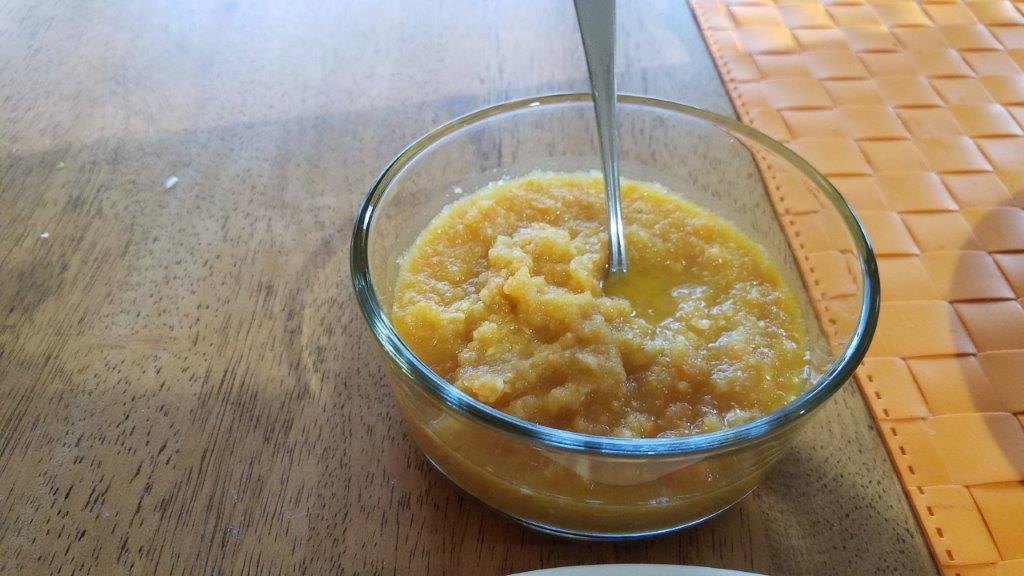 And here’s the final spread: 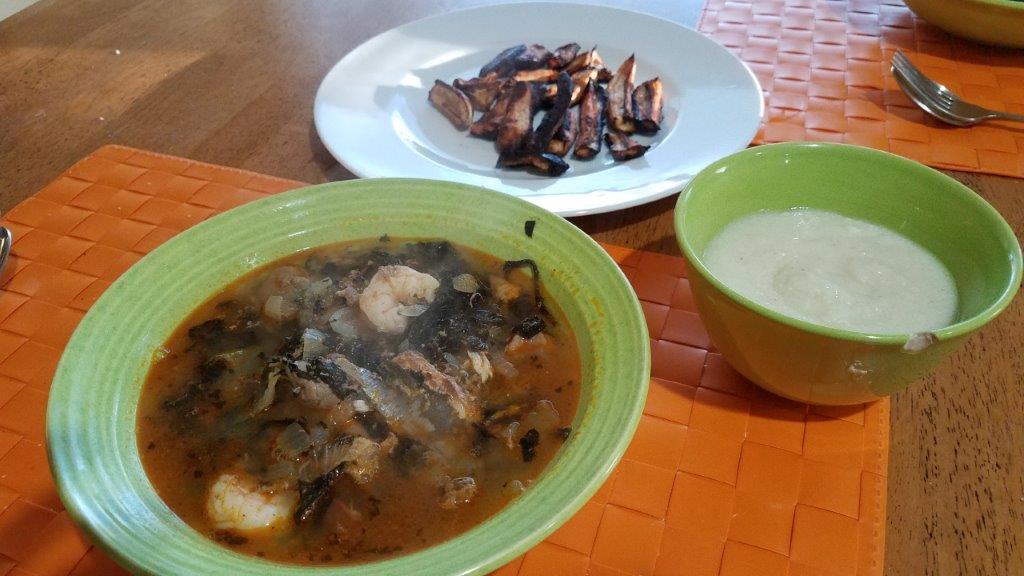 The picture shows some baked plantains, but I don’t really want to talk about those – they were pretty scorched.

The stew, on the other hand, was delicious. Spicy, bitter, nutty, and hearty, with the bitterness of the leaves offsetting the richness of the beef and shrimp, and the spicy peanut sauce pulling everything together. I would absolutely make this again. (And we have two more fish in the freezer so it may be a necessity.)

Once more, the recipes come from the excellent “Cooked Earth” blog. Next up – far off, exotic… Canada.