For this entry, we return to South America.  So far we’ve made two variations on empanadas, for Argentina and Bolivia, and a hearty bean and pork stew for Brazil.  Doing the research for Chile, I found lots of blogs talking about the great variety of food one would expect from a country that is as long north to south as the US is wide.

I also found an entire blog entry dedicated to how much Chilean food sucks. But that one mostly just reinforced my belief that I don’t like most travel bloggers. (Possibly due to jealousy, who knows?)

So let’s figure out how WE feel about Chilean food, shall we?  Turns out Chile has their OWN variant of empanadas, but we’re going to skip that, since we’ve already done that twice.  Instead, we’re going to make a beef and corn pie called Pastel de Choclo. 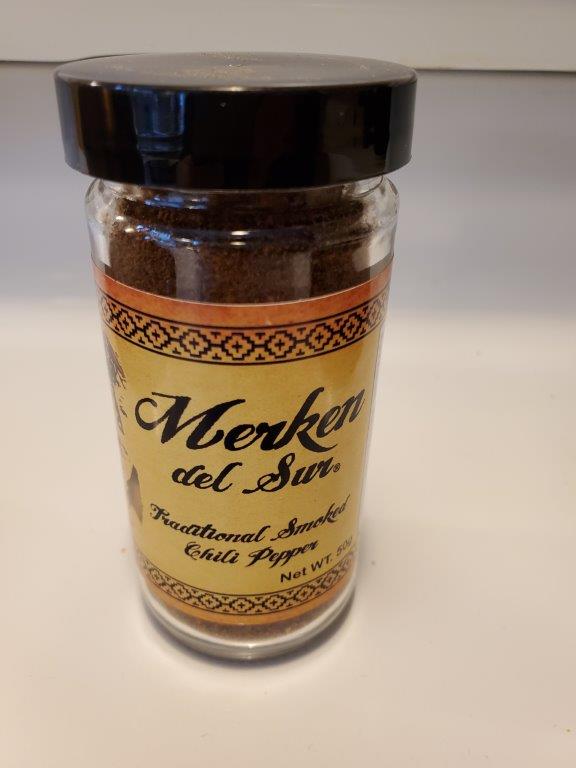 Specifically, it uses something called a “Goat’s Horn” chili. It is smoky and delicious, and I want to put it in lots of things.  Including a big batch of chili, but going down that road in THIS blog entry is going to get confusing real fast.  So where did we GET a whole bottle of this stuff?

All of which, it later turned out, were Chilean.  So we’d basically already HAD at least one Chilean meal this week, that we just hadn’t prepared ourselves. Also, the pastry was called a “Chilenito” which maybe should have been a clue?

To make this pie, ground beef is first simmered with seasonings and onions. 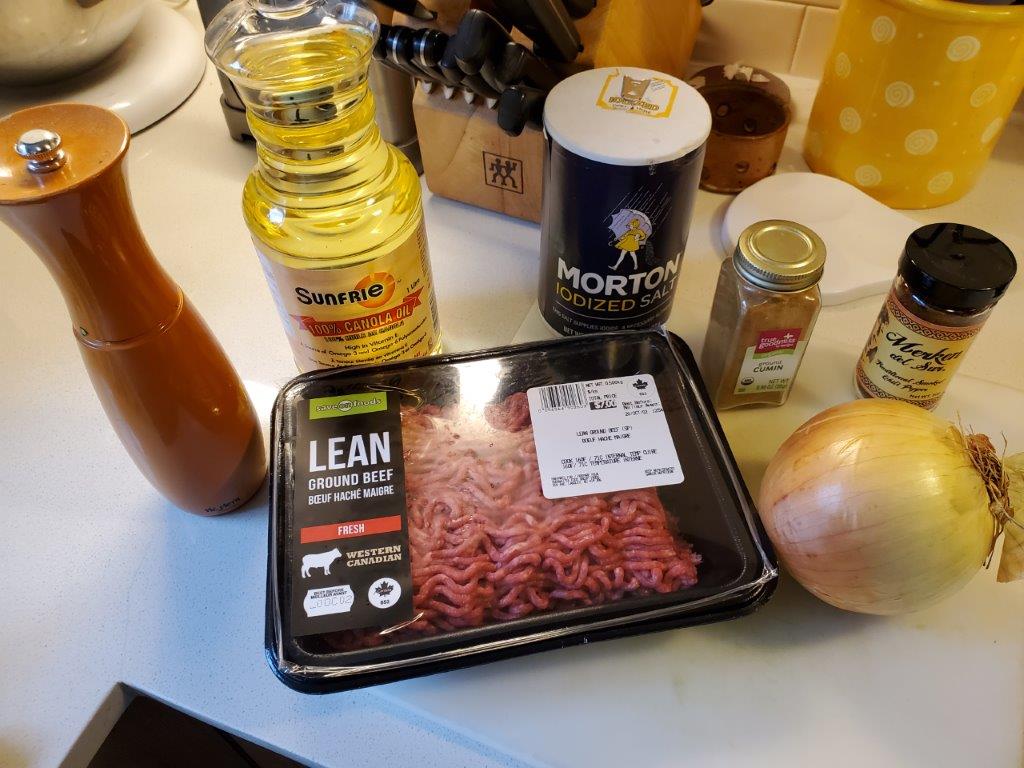 In a separate pan, frozen corn is cooked in butter with basil and seasonings. 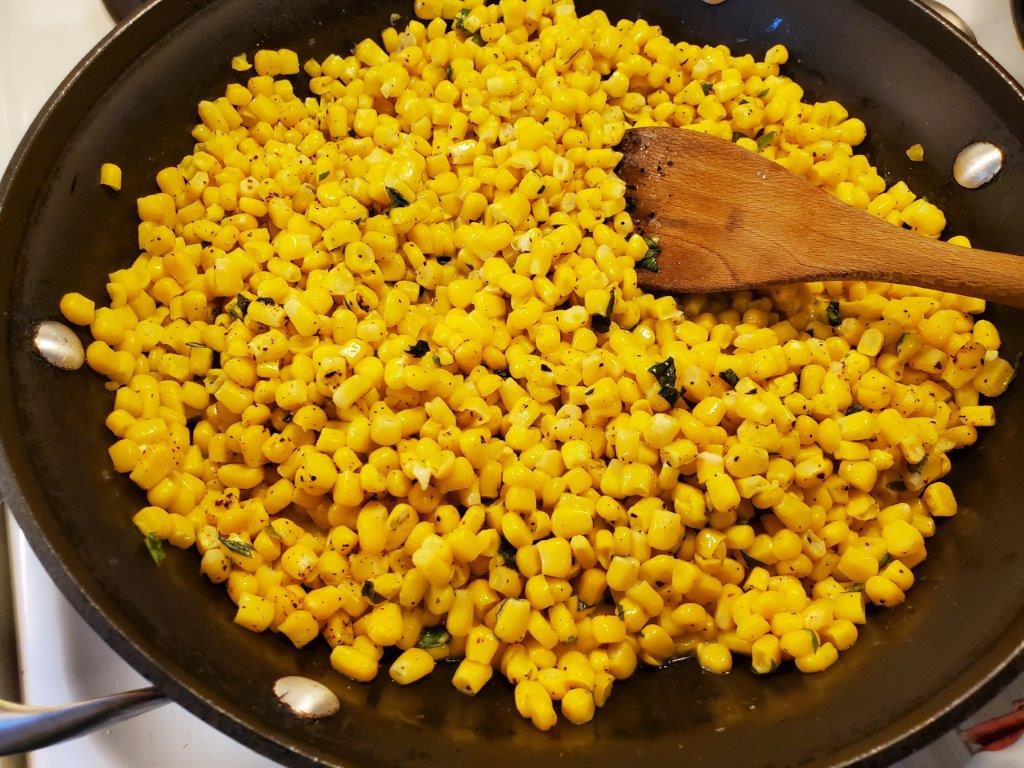 Once it’s cooked, you give it a mush with the immersion blender, then add milk and cornstarch, and cook it down a bit more to make a sweet, spicy, lumpy yellow mixture. 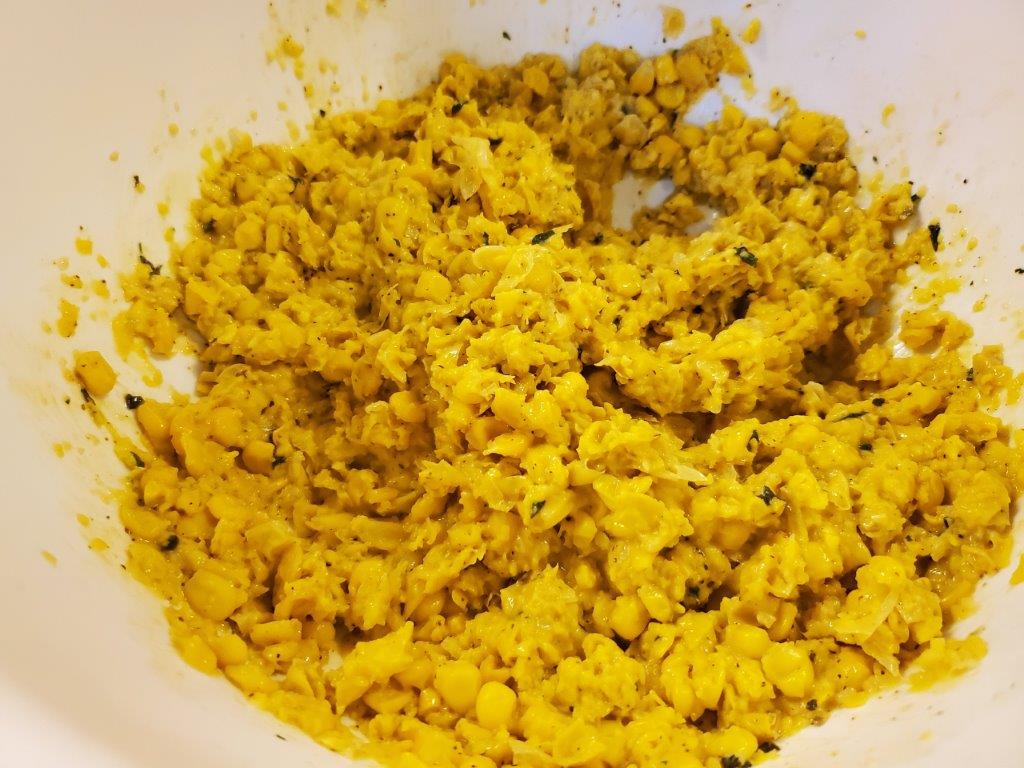 Beef and corn go into a baking dish, and the whole thing gets baked until it’s nice and brown on top. Standard additions at this point between the beef and corn layers would be hard boiled eggs, raisins, olives, or even roasted chicken breast. 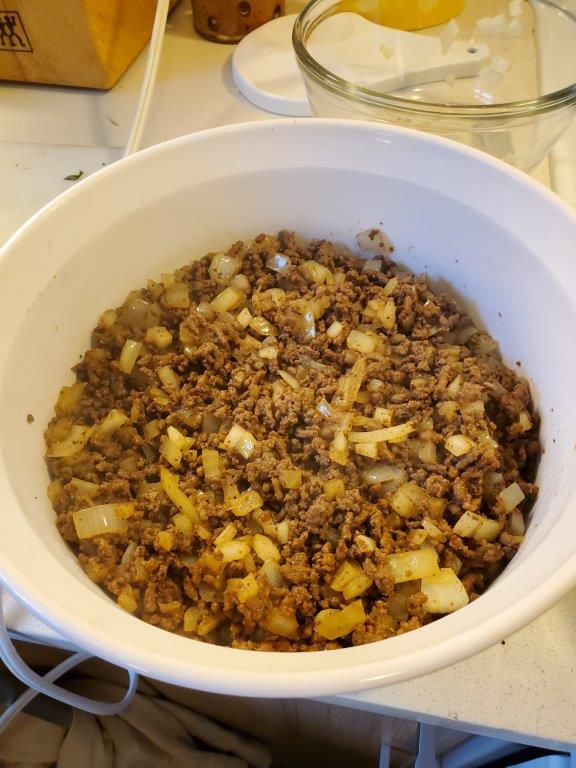 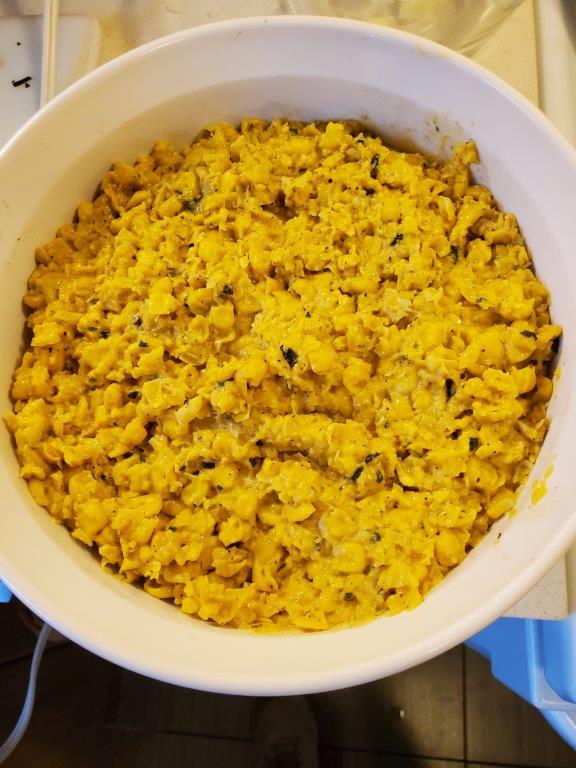 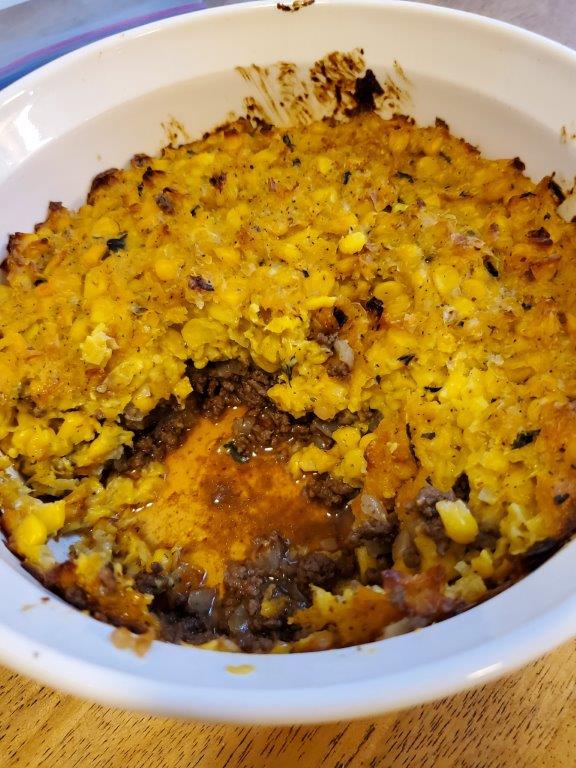 For our second dish, I really wanted to make razor clams with Parmesan cheese, which is apparently something that is extremely common in high end Chilean restaurants, and was introduced by an Italian immigrant in the 1950s. Sadly, although razor clams ARE to be had in Vancouver (yay!) they are not to be had for a few more weeks.

BUT – our recipe indicated that scallops with cheese are ALSO popular, and since the nice fish counter that didn’t have razor clams yet DID have dry scallops, that was a no brainer.

If you’re not familiar with “wet” vs “dry” scallops, “wet” scallops have been treated with an additive to make them keep better during shipping.  Said additive also basically makes it impossible to get a decent sear on them. This was the first time we had actually found dry scallops for sale, and we were VERY excited to see how they compared. (As it turns out, there’s just no comparison – these are infinitely better.) 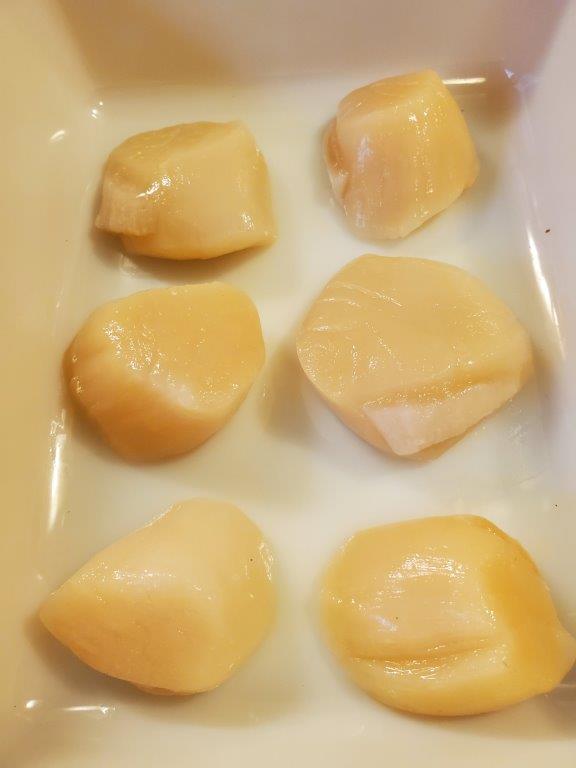 As tempted as we were to just sear them and be done with it, however, this was a Chilean meal, and we were making a Chilean recipe.

OK, we just made the razor clam recipe, but with scallops. So an Italian Chilean recipe. Made by Americans. In Canada.  Whatever.

This involved making a sauce of butter, cream, white wine (Chilean, of course), garlic, and lemon juice, pouring it over the scallops, and then topping them with a big pile of freshly grated Parmesan. 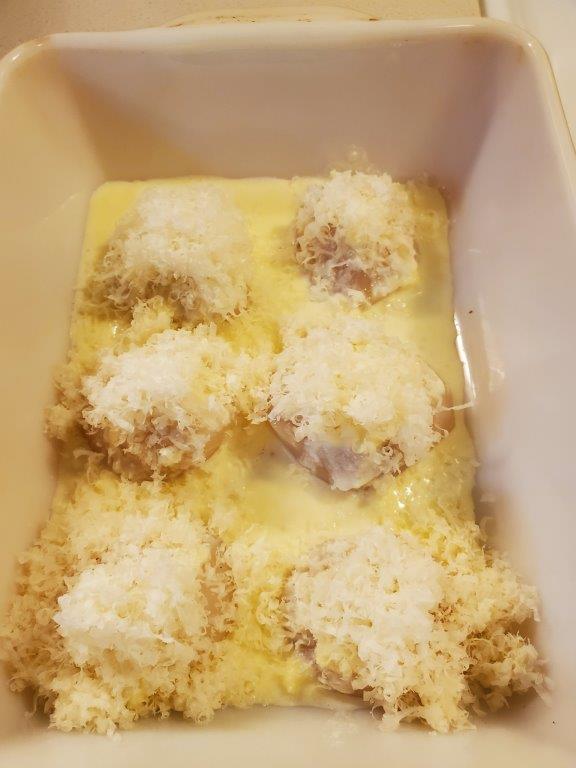 After baking for a few minutes to cook the scallops and melt the cheese, we wanted to crisp the top a little bit.  Although the recipe didn’t specifically call for it, this seemed an appropriate time to break out the blowtorch. Amazingly, we didn’t get a picture of either the blowtorching itself, or a great one of the final product, but here’s the scallops in the background of the main dish: 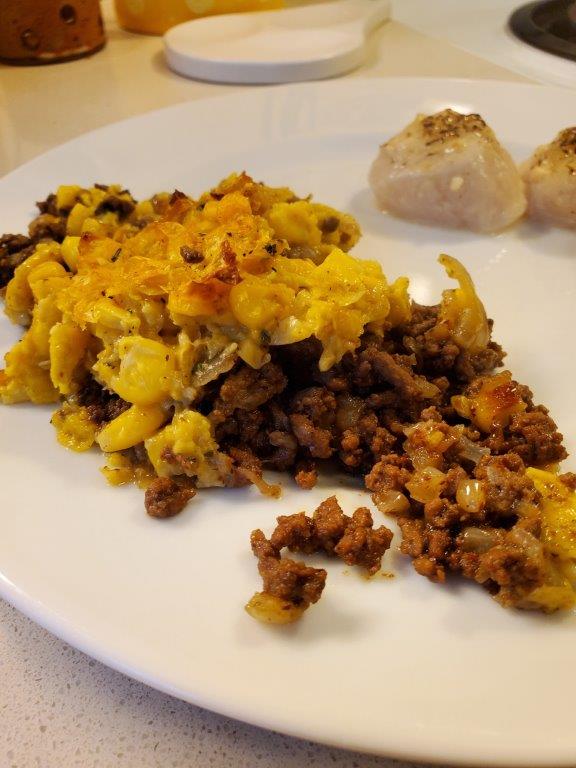 Finally we needed a batch of what turns out to be a ubiquitous Chilean condiment, Pebre.  What chimichurri is to Argentina, Pebre is to Chile.  It’s something like Pico de Gallo, in that it uses tomatoes and cilantro, but the olive oil, red wine vinegar, and scallions are a departure from that template.

And yes, we used Sriracha in place of an authentic Chilean hot pepper sauce, but only because the Chilean grandmother of the author of the recipe said we could. 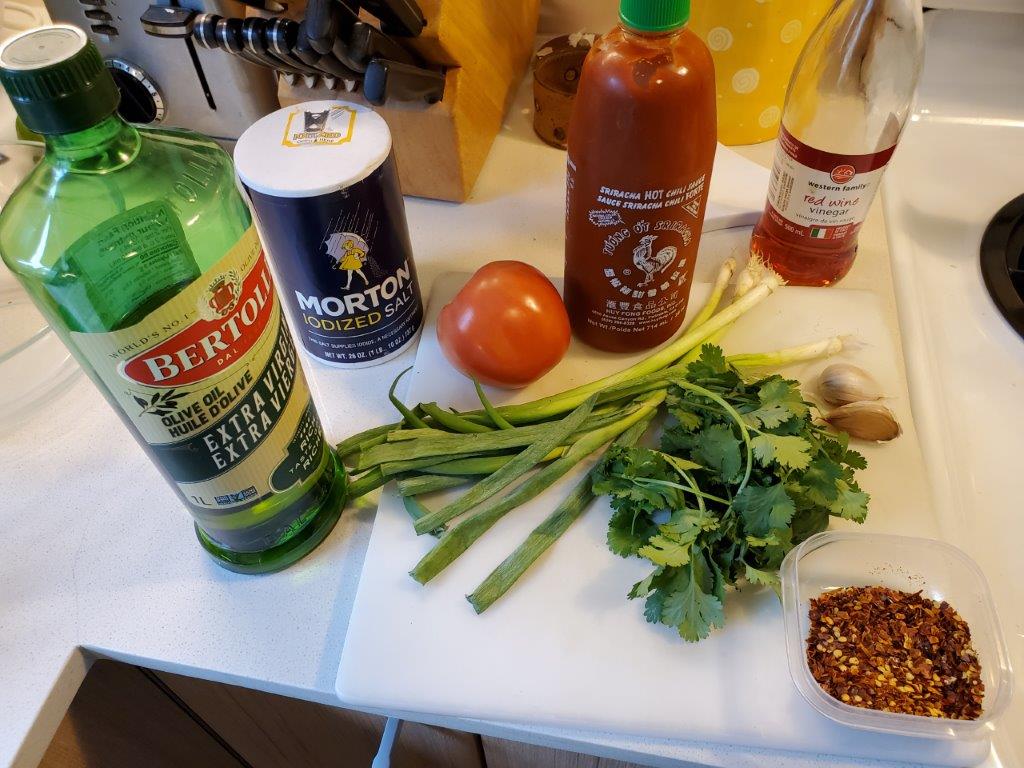 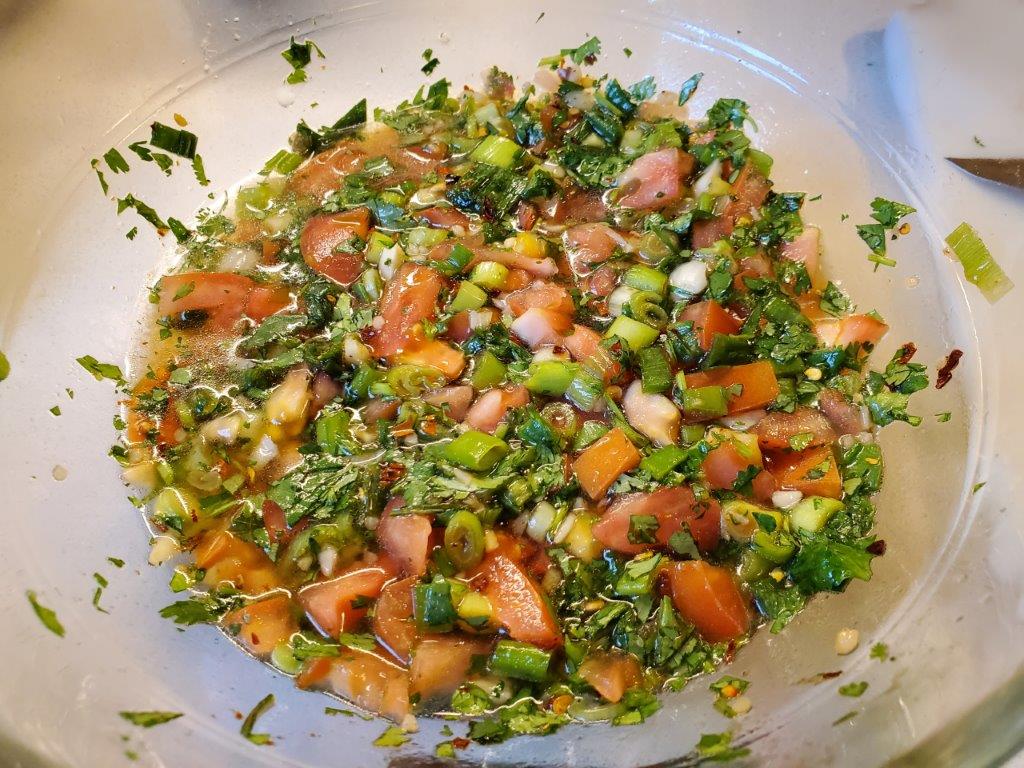 And oh man – this stuff is great.  That may look like a big batch, but we polished it off in two days.  It’s going into the regular rotation for sure.

The main dishes were also fantastic.  The smoky merkén seasoning really shined through in the pie, and the combination of sweet corn with spicy pebre and smoky meat was outstanding.  The scallops were…

Well look – they’re scallops, one of the world’s perfect foods.  With cheese. And a blowtorch. So basically the best thing ever.

Chile, we salute you!  Your food does not suck, no matter what annoying travel bloggers may say. We will be making pebre again in the near future.

And next up, we have the utterly impossible task of programming a single meal from one of the most diverse food cultures on the planet – China.

OK, let’s just get this out of the way right now. “Chad” is an anglicization of the Kanuri word for “Lake.” So we can skip those jokes, right? Great!  Moving on…

This blog has been deeply indebted to the research of Marc Rinaldi, who we have been referring to as “Cooked Earth Guy” this whole time.  Well, he’s a real person, who is better at research, cooking, food photography, and writing than we are.  What he is NOT better at than us is publishing a new entry on a regular basis.  Probably because he doesn’t have his own blog to crib from, and has to do all the work himself.  I want to acknowledge how much we’ve appreciated all his work because…

…we’ve caught up with him, and this will probably be the last entry that steals his recipes.  His last entry, on the Republic of Chad, was published over two years ago.  Still – lets see how we do with it.

Chad is another country from Central Africa, so we’re going to see similar ingredients to last entry – okra, spinach, peanuts.  In fact, both meals could be described as “One Beef Stew and One Vegetable Stew With Peanuts.”

But there are differences, starting with our first new ingredient for a while: Jute Leves! 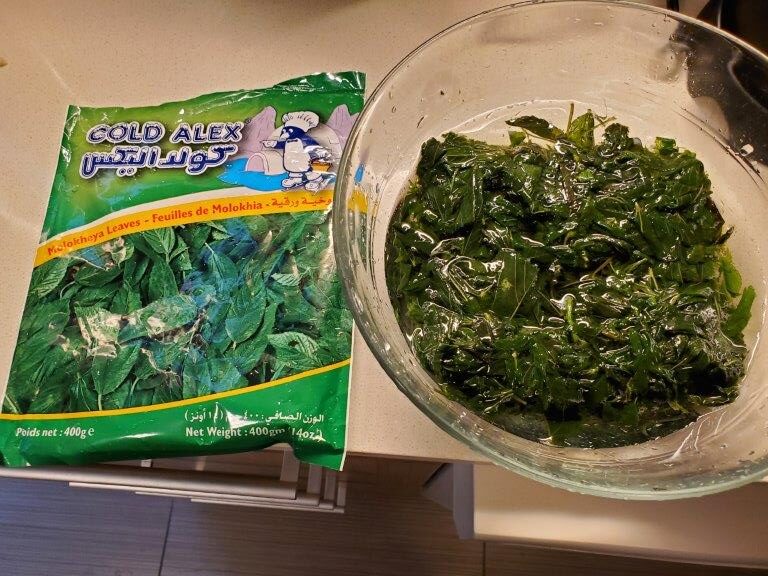 Jute leaves, also known as Molokha, (and a ton of other names) are cultivated all over the world, but particularly in the middle east and Africa.  We picked up a bag at a middle eastern grocery store in Kitsilano. The bag had a penguin on it for some reason. (As far as we know, jute leaves and penguins are not co-located anywhere in the world.)

If you like leafy green vegetables in general, you will probably like these too – they’re a bit gloppy on their own, but as part of a stew, they have a lovely thickening effect, similar to okra. So stew them we did, with onions, garlic, and some beef. 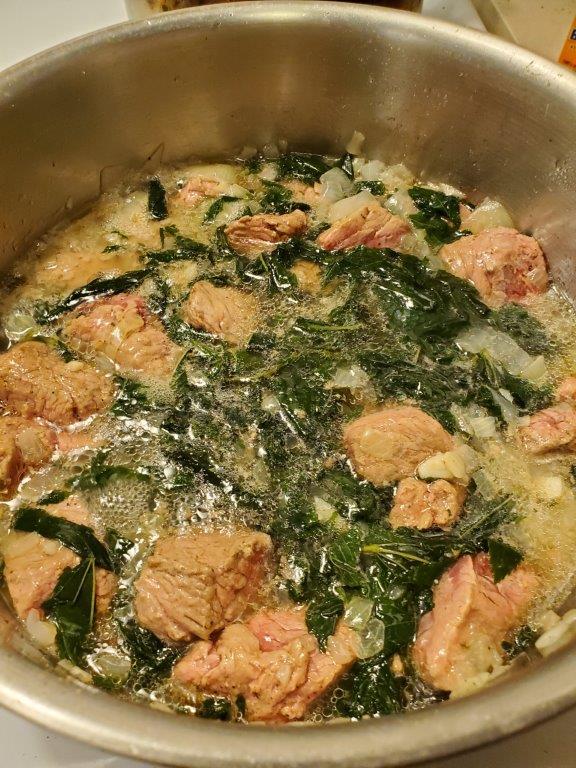 The vegetable and peanut stew used a very pretty assortment of vegetables: 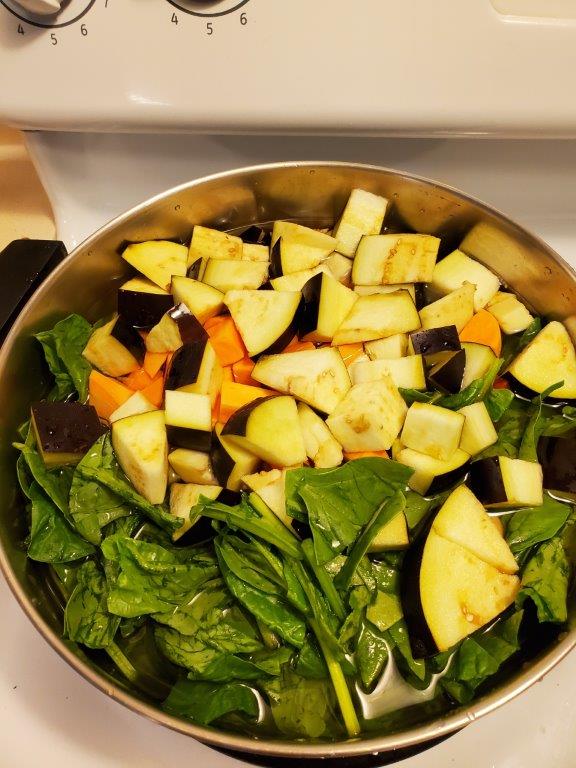 However, one big drawback of our Vancouver apartment is that unlike our old place, there’s only an electric range.  This makes it much harder to follow instructions like “bring quickly to a simmer, then lower heat.”  If you put it up high enough to come to a simmer within the next day or so, then it’s going to STAY at that heat for a lot longer than you’d prefer.

As a result, the stew both never really thickened up, while at the same time the veggies got pretty mushy.  It still wasn’t bad, but the peanut-to-things-that-are-not-peanut ratio looked nothing like the beautiful pictures on Cooked Earth.  Sigh.  Certainly the one we made last time for the Central African Republic turned out better. 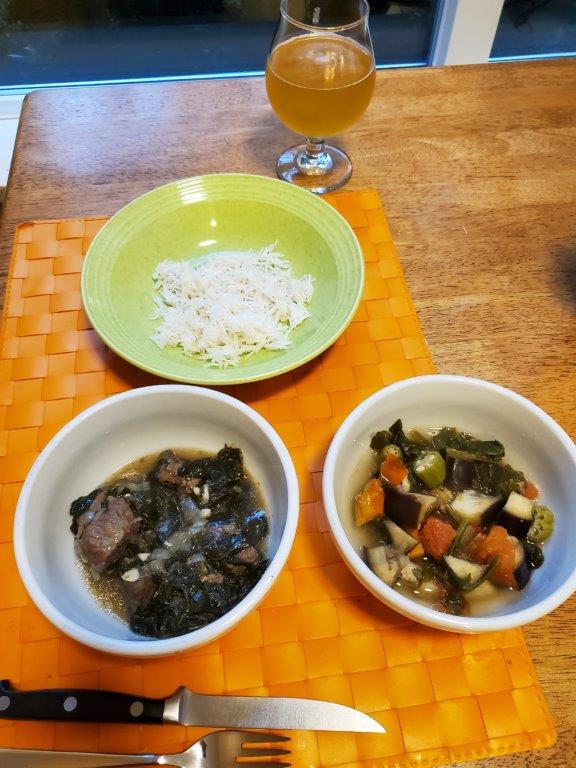 The beef stew, on the other hand, was delicious, and jute leaves may have to become a regular freezer staple.  I wonder if we can get them with extra penguin?

All in all, it was a filling dinner, and we got a lot of mileage out of the leftover veggies by cooking other stuff and tossing them on top for the rest of the week.

So farewell, Mr. Rinaldi, and thanks for all you’ve done.  Next up, we head back to South America for the first time in a while, and find out what Chile has to offer us!