Happy shelter in place, everyone!

Part of the fun of this project has been visiting lots of random grocery stores, and hunting for exotic ingredients.  Since that’s not really a possibility during quarantine, it looked like we were going to have to postpone our sojourn to far off, exotic… (checks notes)

We actually made so many different Canadian dishes that this one is going to be formatted a little differently than the others.  Instead of one big meal, this is broken up into two desserts and two main dishes, which will be presented in a culinarily logical sequence rather than the order we actually made them.

So first up – the dish that everyone EXPECTS us to do: Poutine!

There’s a million degrees of fancy that can be attempted here.  One of our usual reference sites (cookedearth.com) was so sarcastic about poutine that they actually used a stock photo to accompany a recipe that included the step, “Feel ashamed that you didn’t try harder.”

However, we felt no shame.  We made french fries from scratch, including the proper double fry technique. (Low temperature to cook, high temperature to crisp.) We made a delicious gravy, also from scratch.  And we opened a 30 year old bottle of champagne to go with! 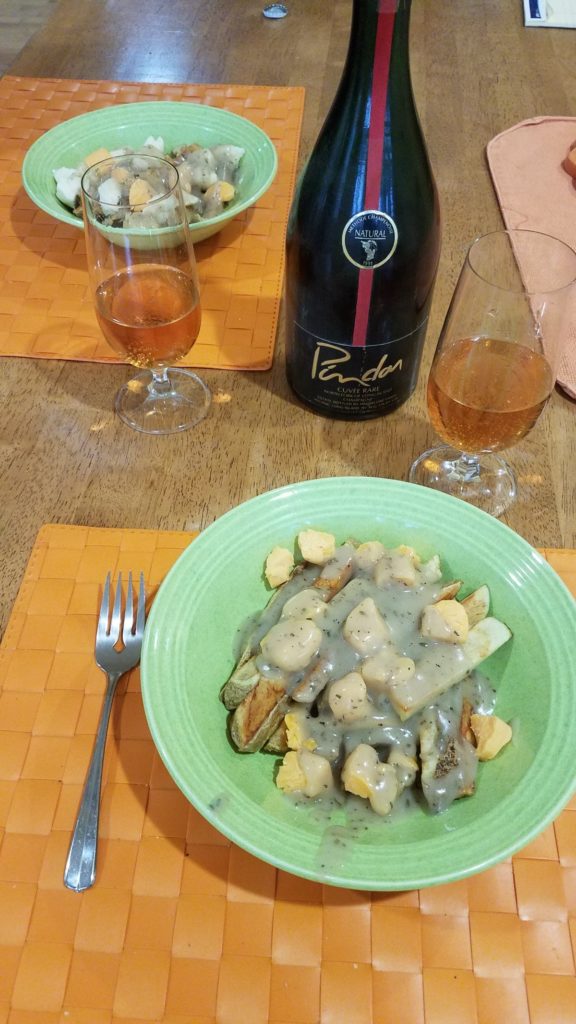 A word about the champagne. For the first 9 years of our marriage, I didn’t drink alcohol at all, so Leigh didn’t open many bottles of wine, as she’d be drinking them by herself.  I’m still more of a beer drinker, but I do now enjoy a glass of wine very occasionally.  What that means is that we have a small collection of bottles that Leigh has had with her for a very long time, all of which are of highly uncertain degrees of preservation.

And poutine DEFINITELY called for Heisenbooze, because… we’re moving to Canada! Appropriately enough, we’re celebrating the food of our soon to be adopted homeland.

The champagne was actually pretty good.  I don’t drink enough to be a good evaluator, but it tasted like champagne and still had some fizz to it.  I used the rest to make a cream sauce to put over shrimp and pasta the next day.

And the poutine was delicious! To heck with you, Cooked Earth Guy who has done 95% of our research for us and provided us with lots of good recipes and basically made this entire thing possible… On second thought, we just won’t tell him.

On to the main event, food wise. There’s a traditional Canadian holiday meat pie called a Tourtière.  I checked with a number of my friends from north of the border, and they all had things to say about this.  We went with a recipe from Food Network – Canada as a reasonably good choice.

First – scratch pie crust!  We’ve been doing a lot of baking from “Sally’s Baking Addiction” during this shelter in place, including an excellent lemon meringue pie. Since the recipe didn’t specify the exact pie crust recipe, we used that one again. 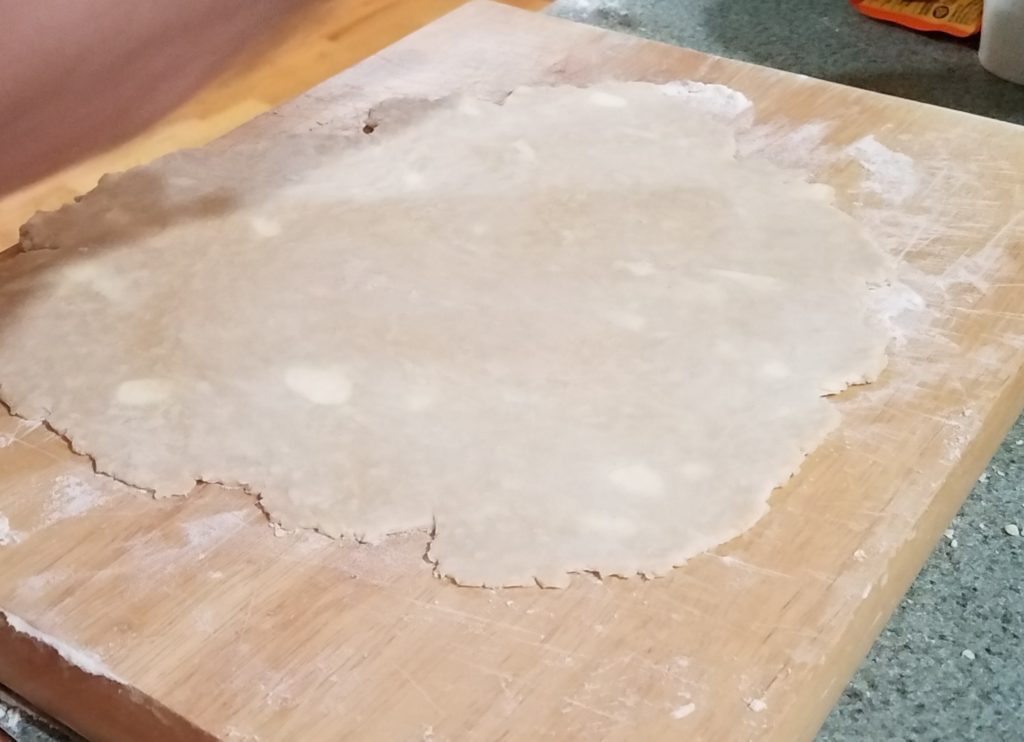 Next, the filling – there’s a million different variants for this pie, but the most common elements are ground meat, potatoes, and warming spices.  This particular version used ground beef, grated potatoes, allspice, and Worcestershire sauce. 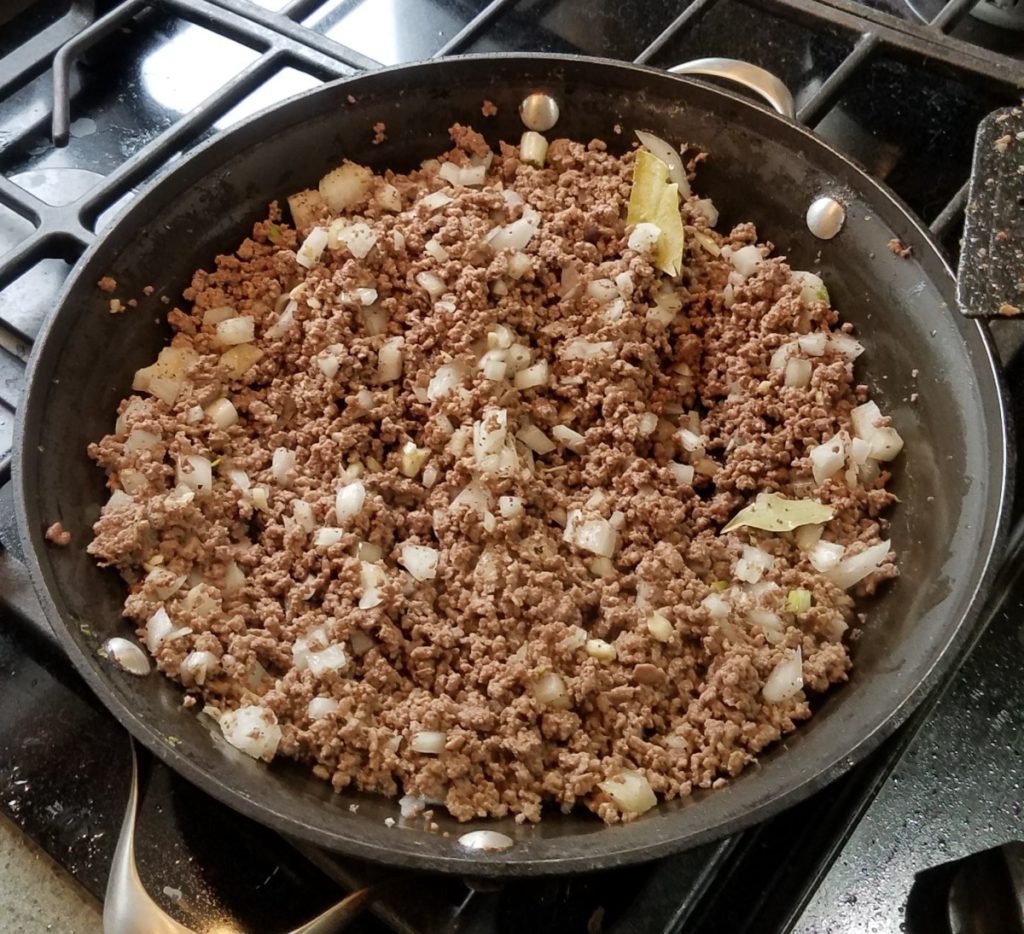 Also a bay leaf, but I think that’s there for religious significance, since I’ve never figured out what they actually do.  Still, I continue to use them to appease the bay leaf gods, who are quick to anger if you don’t make the appropriate sacrifice. 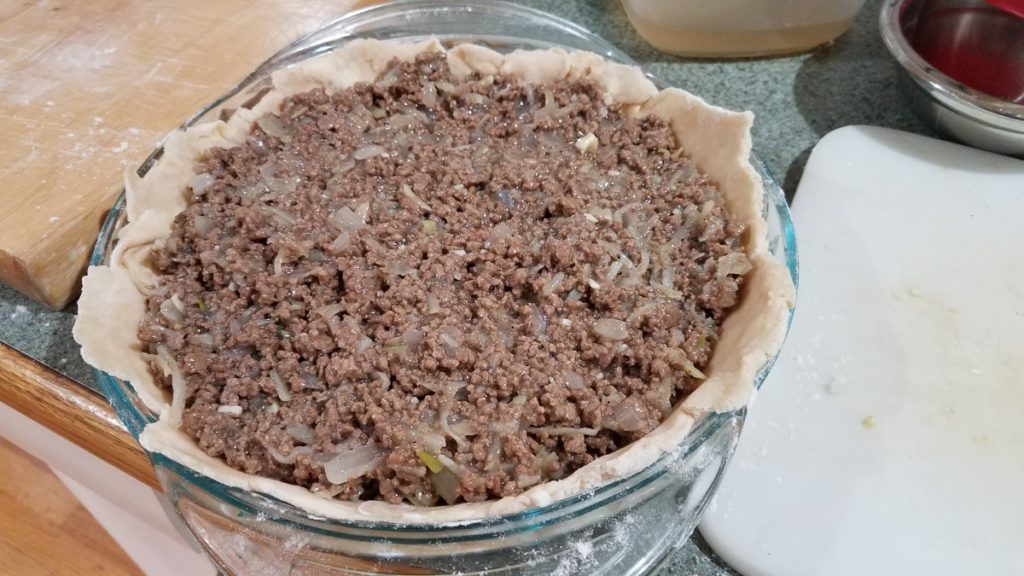 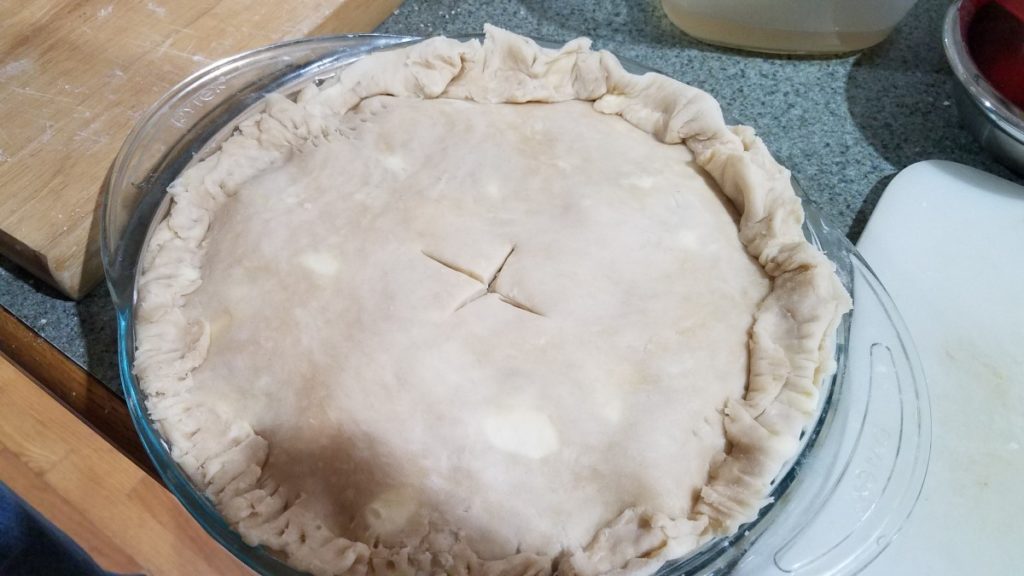 Once assembled, the top is brushed with egg yolk, and then into the oven it goes.  The result is as pretty as one could hope: 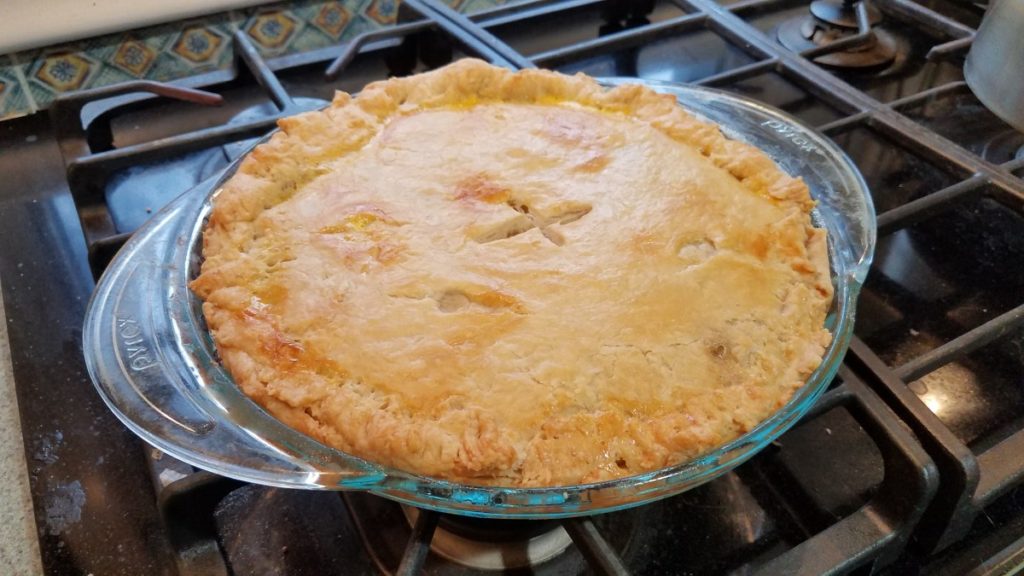 And the result was delicious!  Sadly, the lighting wasn’t as good for the photo of the final product, but trust us – it was great. 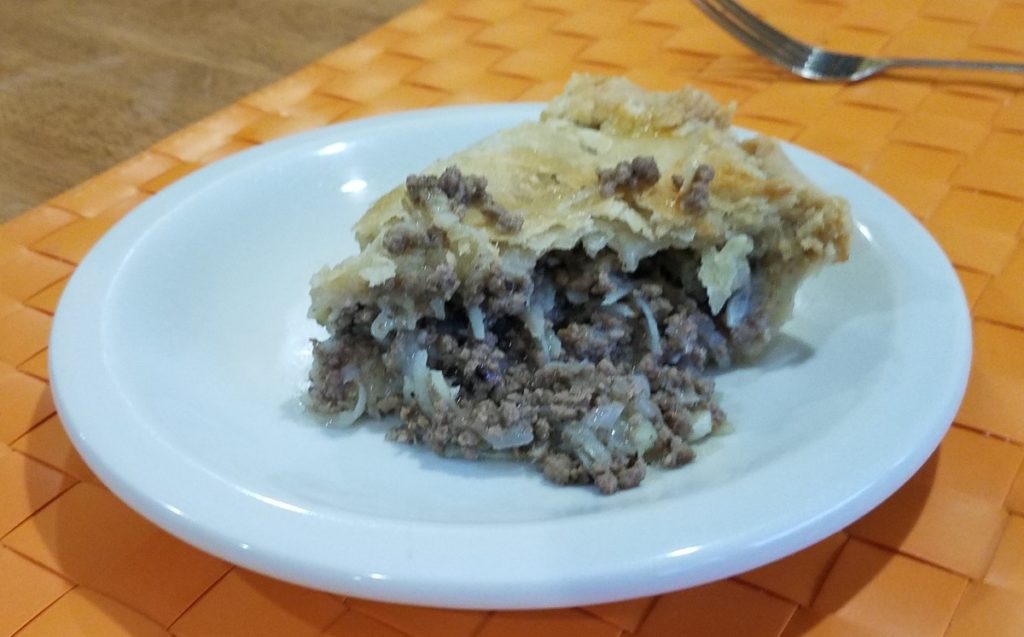 So – two entrees down.  What’s up next?  Dessert, of course!  If you ask Canadian people what the most quintessentially Canadian dessert is, they’ll probably tell you “butter tarts.”  At least, that’s what they told us. So more pie crust it is!

Butter tarts are actually really simple – they’re little pies with a filing that, at minimum, consists of butter, sugar, maple syrup, and eggs.  And that’s it.  There are, of course, a million variants, including raisins, nuts, and other additions, but we went for the dead simple version.  No “in process” pictures, but here’s what we ended up with: 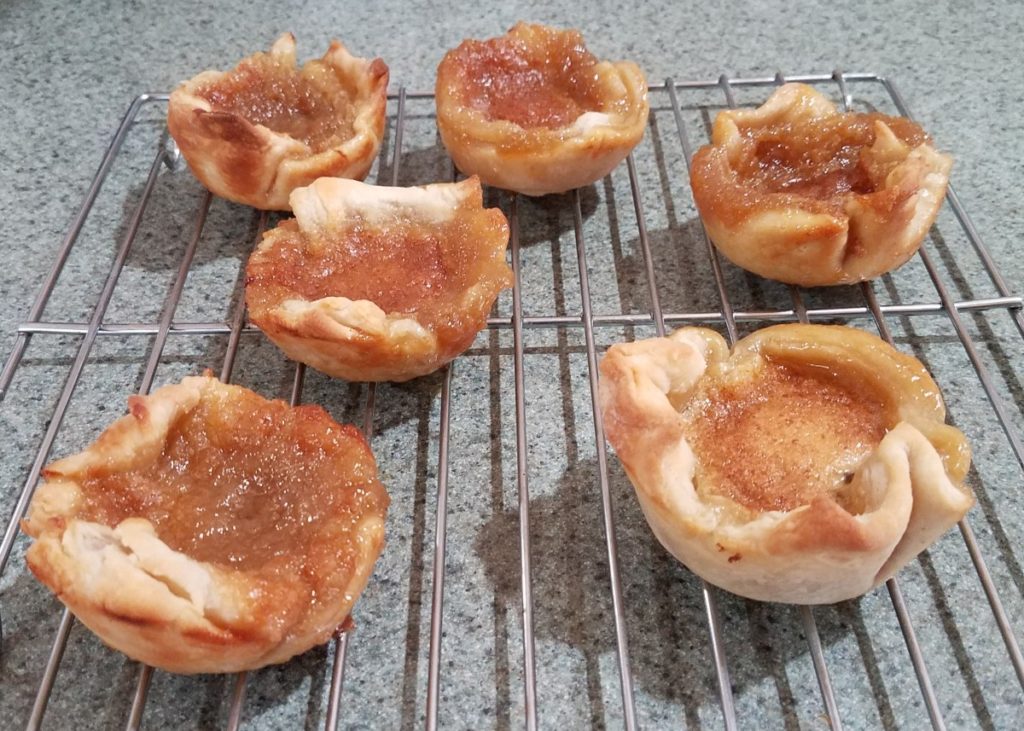 Note: Butter tarts are really hot when they first come out of the oven.  Wait longer than we did to try them. (Narrator: “They didn’t.”)

And then one final dessert, which is my absolute favorite Canadian contribution to world cuisine: the Nanaimo bar. (Edit: Here’s a great video on the history of the bars.) These things are really, really dangerous.  They’re a multilayer no-bake cookie bar.  The bottom layer is chocolate, graham cracker, coconut, and nuts.  Middle layer is vanilla custard.  Top layer is a hard chocolate shell.  We weren’t thinking about the blog when we made these, so no process pictures here either.

Which is a shame, because the process is actually kinda interesting.  You have to make and chill each layer one at a time as you assemble the dish, including tempering chocolate.  It’s all very fussy.  But then once it’s assembled, all you do is shove them in the fridge.

And then try not to eat them all at once.  That’s the hard part. 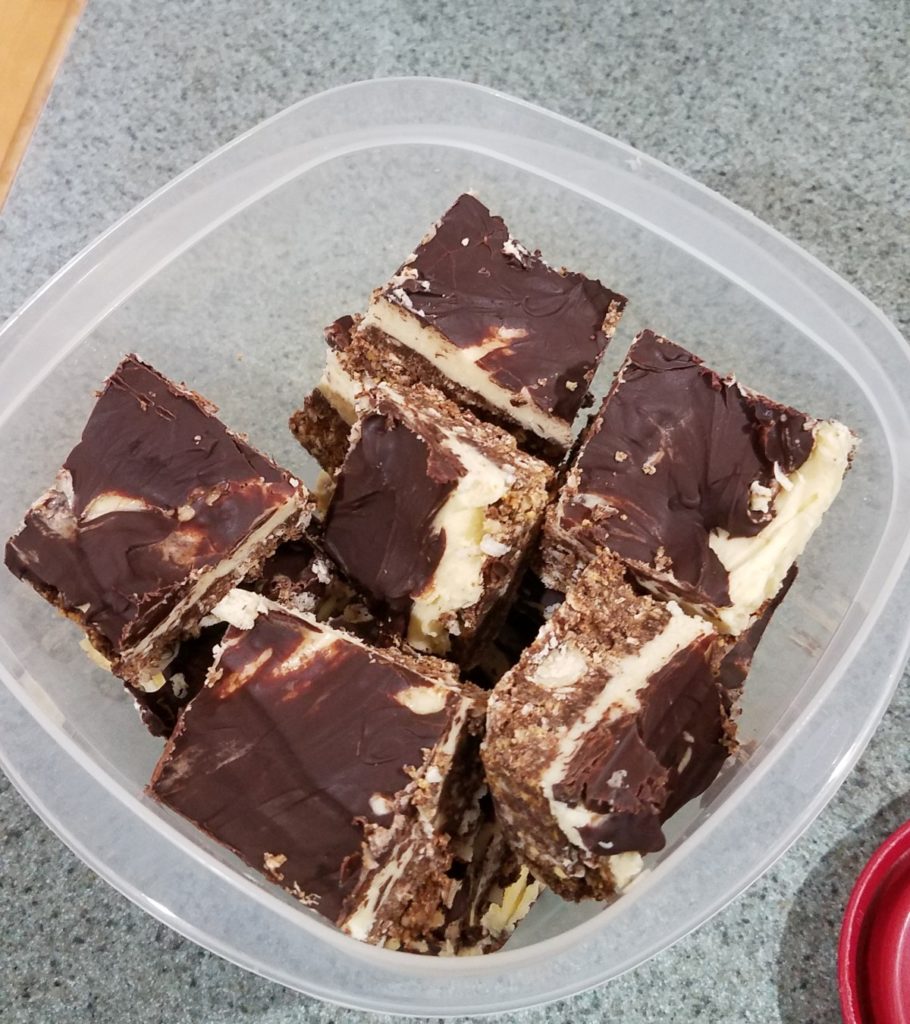 And that’s Canada!  Still a foreign country, but not for very long!

Next up, a country we SHOULD have done sooner, but we didn’t notice it had changed its name… Cabo Verde.