Hold on to your eyeballs, folks, because we remembered to take LOTS of pictures this time.  This may or may not be a good thing.

Brazil is an enormous country, obviously.  Lots of people live there.  How many?  Like, a Brazillion people!

But the fact remains that this is one of the stops on our tour where any choice of dishes is obviously going to be absurdly reductive.  That said, there’s one dish that just about all my sources agreed would be a good choice for the national dish, and that is feijoada: a hearty stew of black beans and various forms of pig.  To accompany that, we would also make pao de queijo: a tasty cheese bread, farofa: toasted cassava flour, and sauteed collard greens.

So first, the stew.  This is for special occasions, so it uses many different kinds of pig, but it’s peasant food, so none of them are what you’d call fancy.  You would, however, call them hooves, ears, and tails. 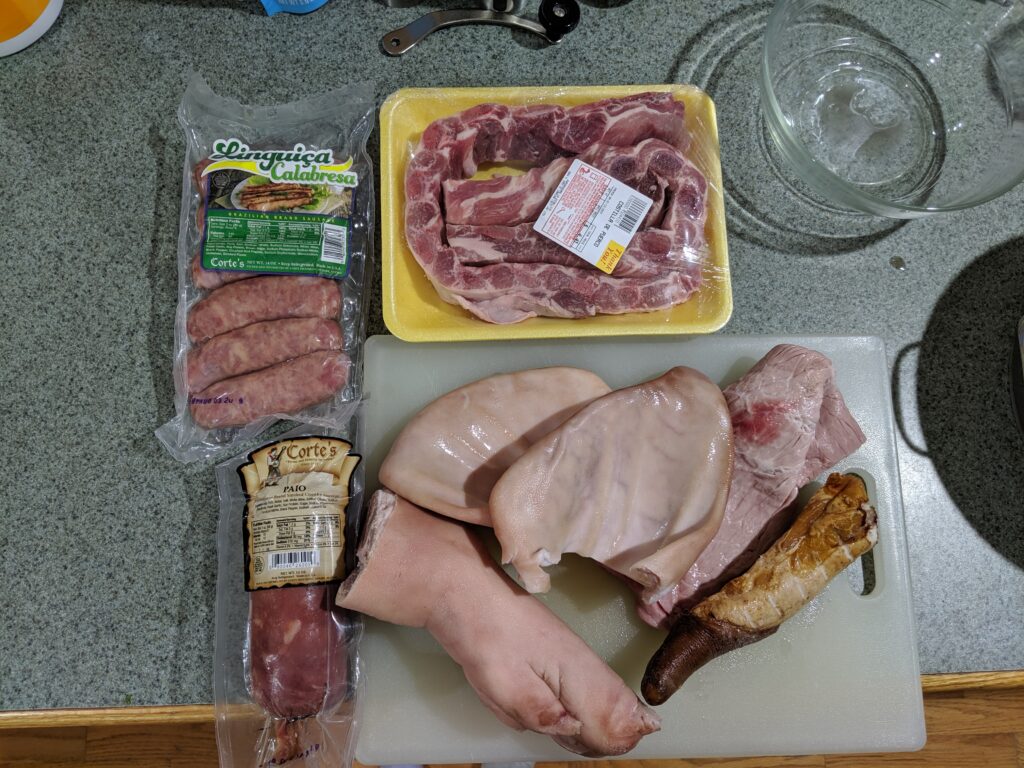 In addition, we have some pork ribs, and two different kinds of honest-to-god Brazillian sausages.  Where the heck did we find those, you ask? At a store called “International Foods” in Sterling Heights, Michigan.  Despite sounding like a Mafia front, it is actually an amazing little grocery store, which will probably be seeing some return visits as we continue through the alphabet.

There’s also (just under the ear) a piece of what I’m fairly sure is NOT carne seca, despite what we thought when we bought it, but what the hell, into the pot it went.

I was a bit nervous when I read that the correct beans for this stew were “turtle beans”, but it turns out that just refers to the standard black beans that you can get anywhere in the US. So to start, let’s boil up some beans with an orange in the pot. Bay leaves added for some reason. (I’m not convinced they do anything in any recipe, frankly.) 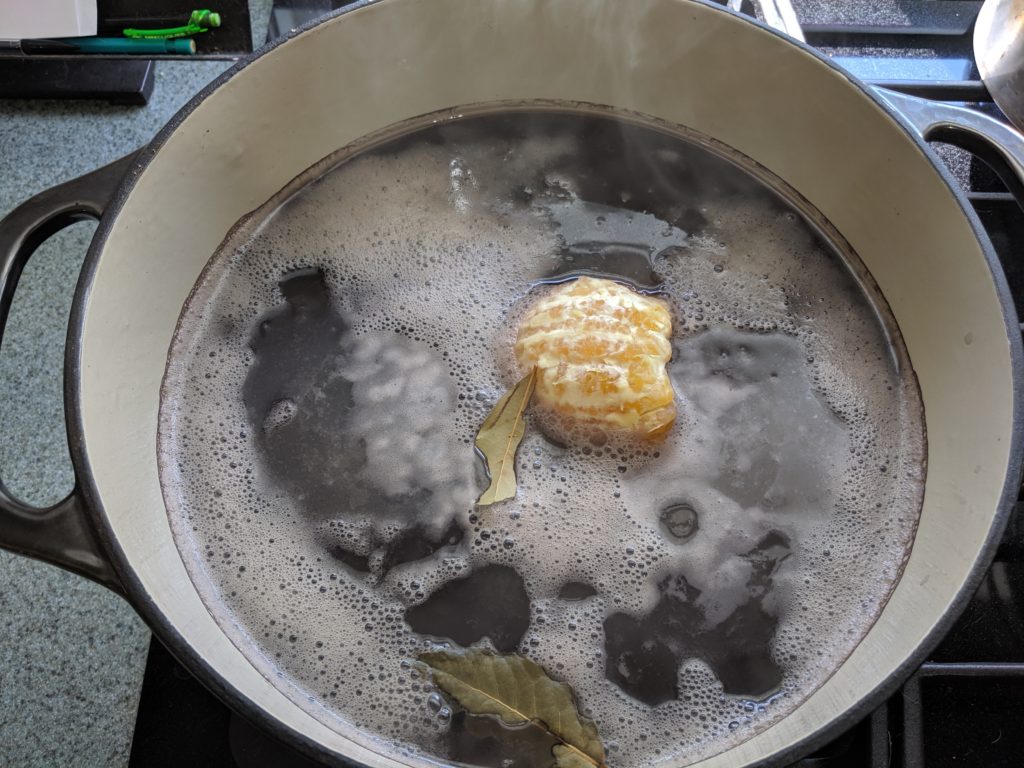 Once they’ve cooked a bit, in go the pig parts: 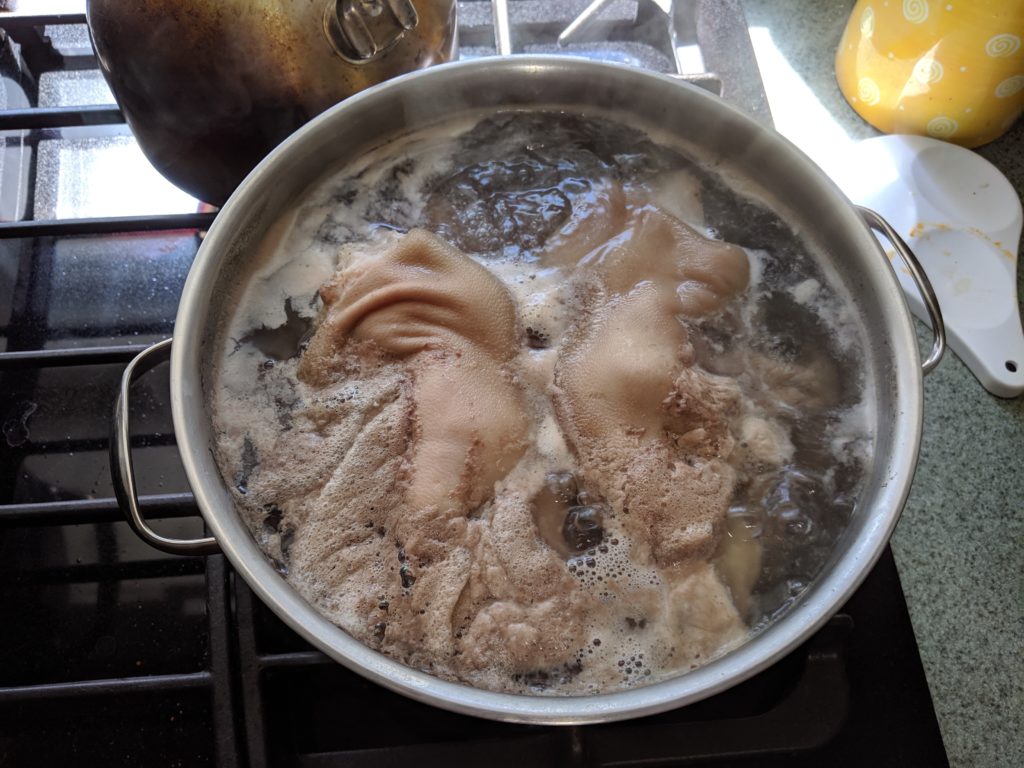 And that is almost the entire preparation for the stew.  After 45 minutes or so, you pull out some beans, mash them up for texture, and throw them back in to cook some more. So while that cooks, let’s make some cheese bread.

The way we found International Foods in the first place was at the end of a long search for the appropriate type of cheese for the pao de queijo.  This cheese, called Queijo Minas Curado, is murderously hard to find online in English, and as was confirmed by our dinner guest, not even necessarily all that easy to find in Brazil outside of the Minas region where it is made. We had friends looking all over for this stuff, and then we found a store an hour away in Michigan that stocked it!  What are the odds?

I got about 20% of the way through grating the brick of cheese before I remembered we had a food processor: 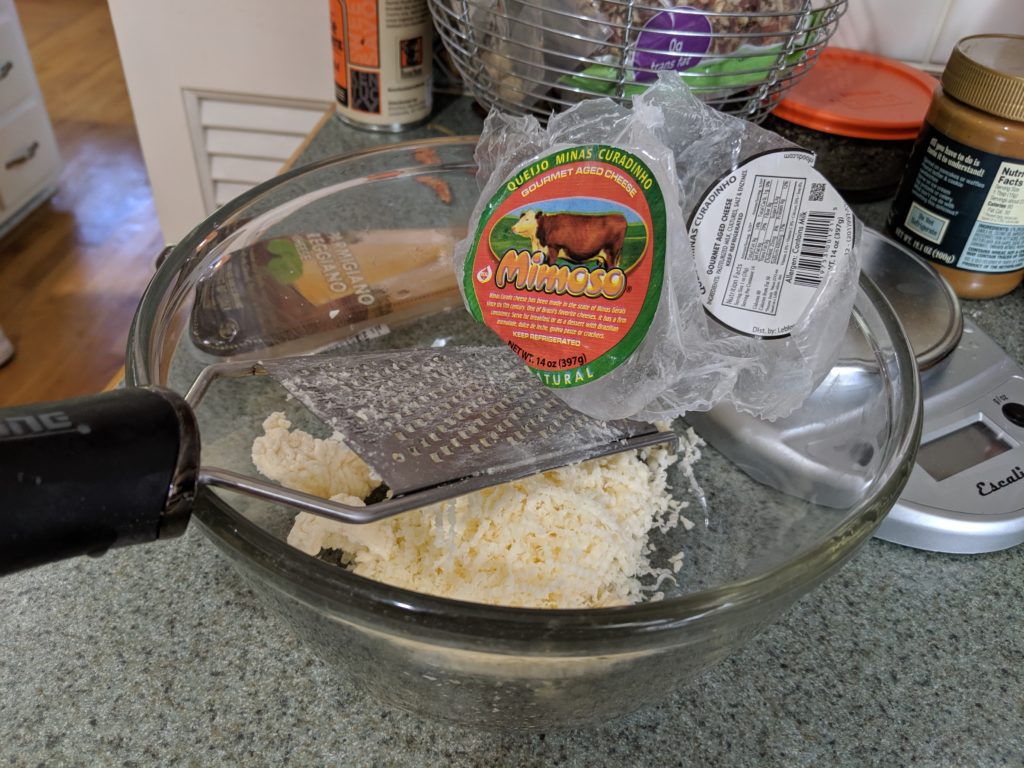 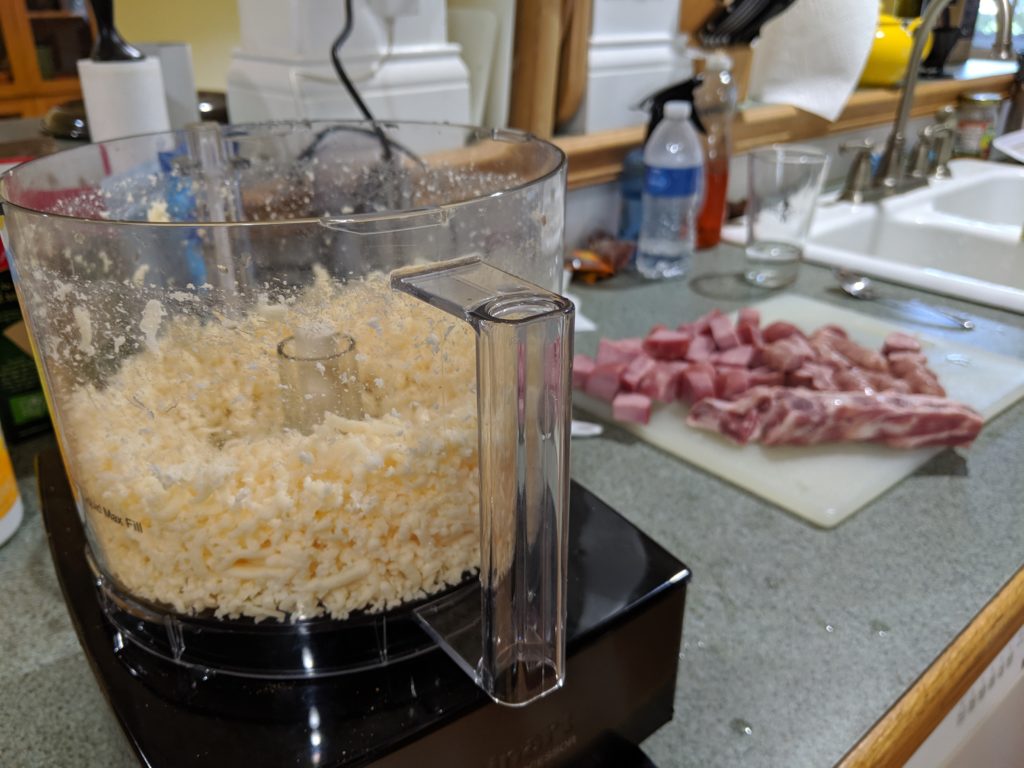 Once you finish grating the cheese, you mix in egg, milk, some Parmesan, and two different kinds of cassava flour (thanks again, International Foods!) to make a gooey, sticky paste. 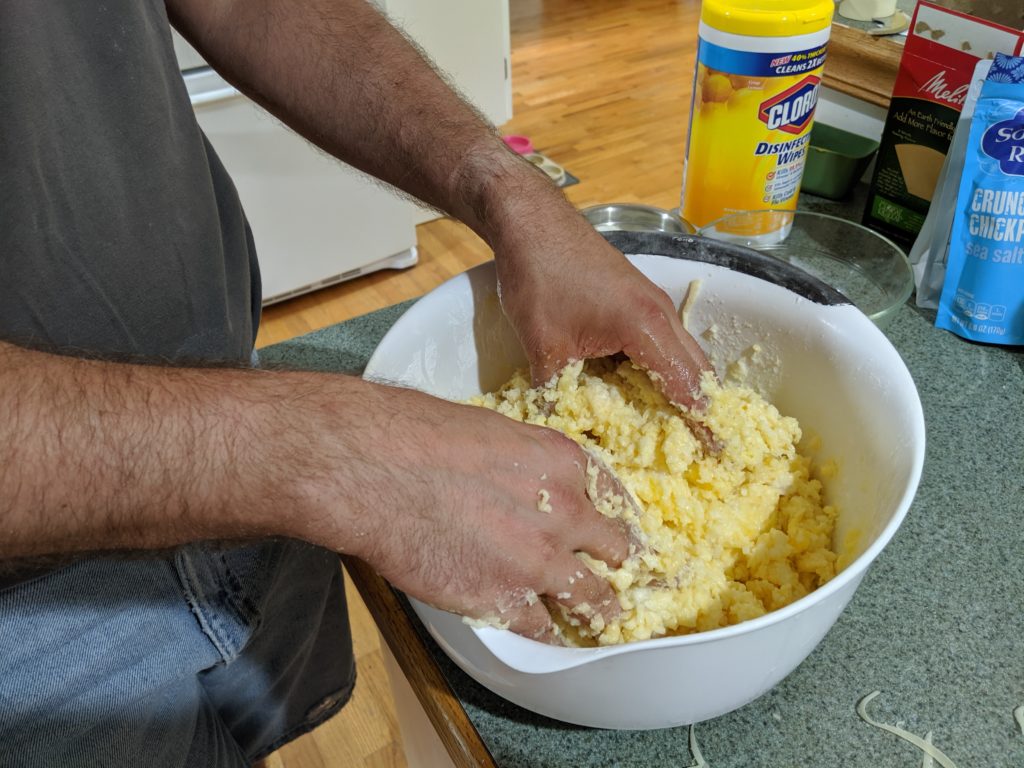 Said paste gets formed into balls and baked for a while. We’re now getting into the home stretch – just the farofa and the collards left. Both are trivially easy.  The farofa recipe is basically: cook bacon, cook flour in the bacon grease, then put scallions in the flour. 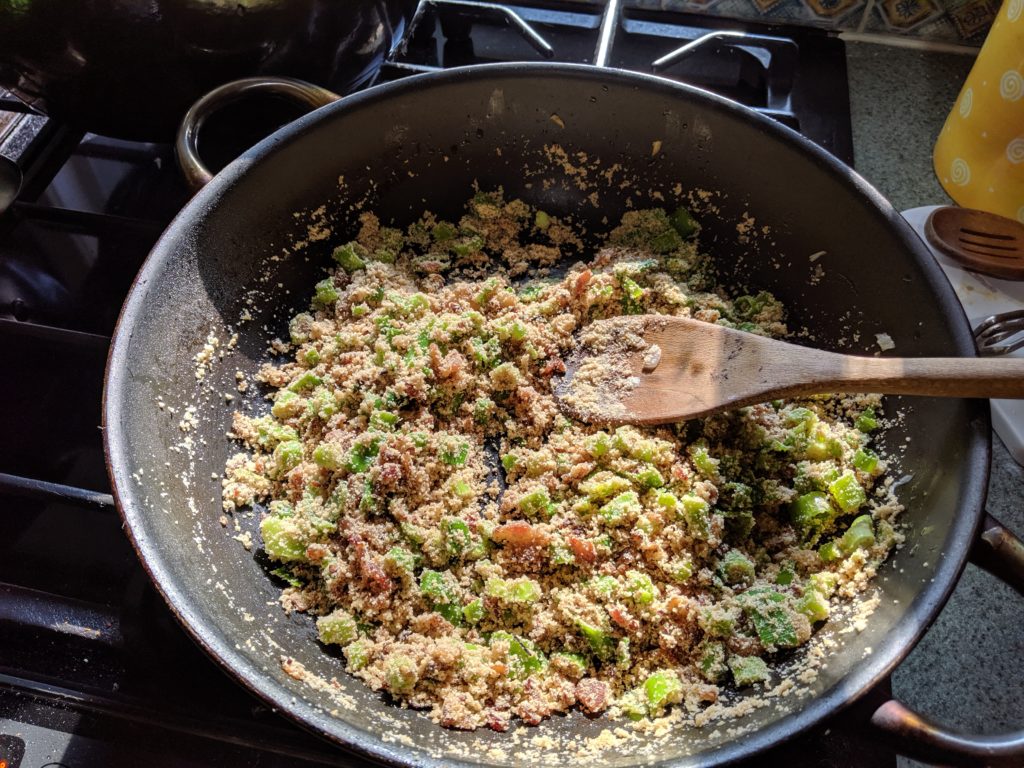 Which is Iron Chef level of complicated next to the traditional Brazilian preparation for collards: Slice into ribbons and sautee in oil for about three minutes. 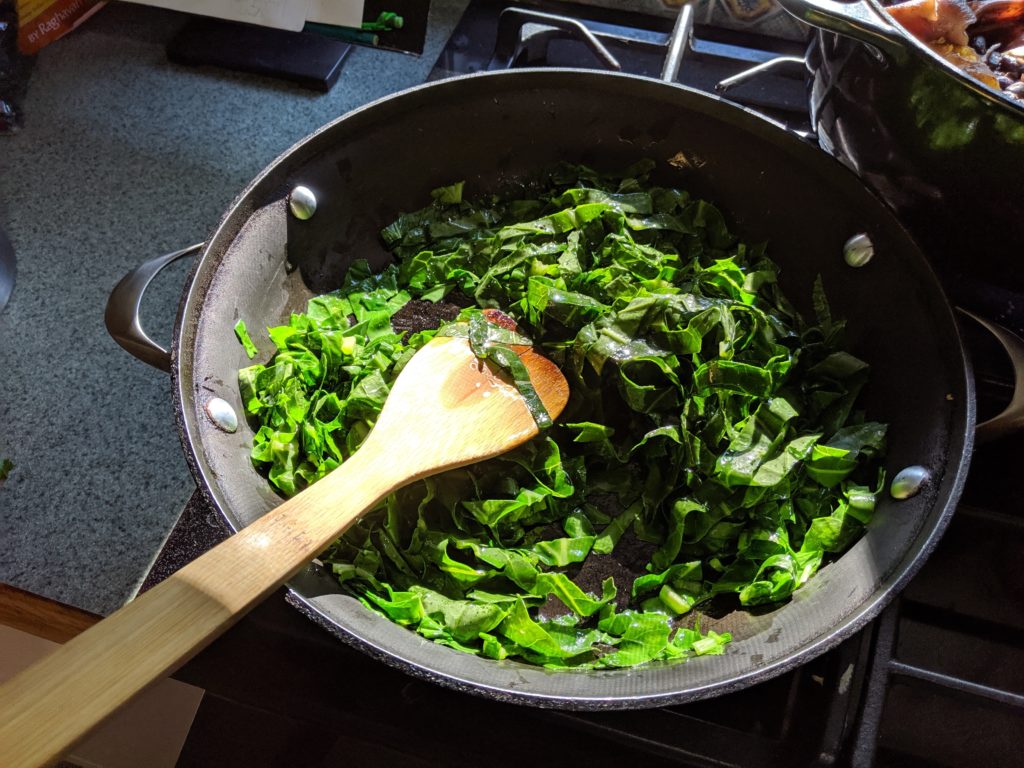 With the pao out of the oven, the side dishes ready, and the stew smelling amazing, it was time to eat! 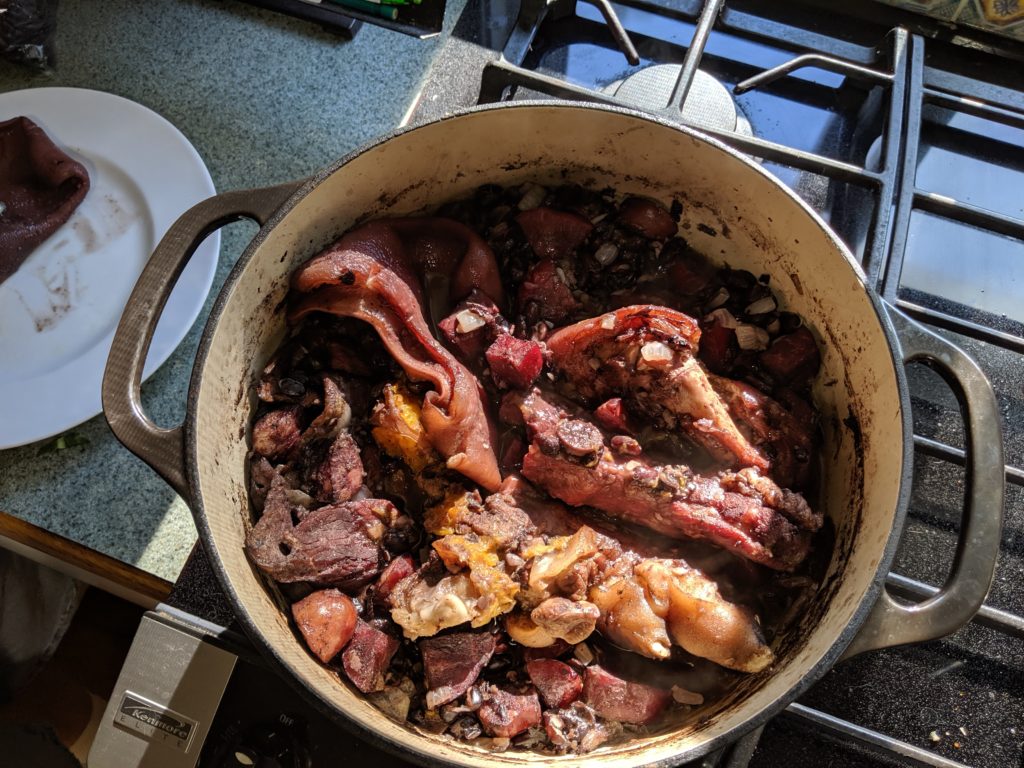 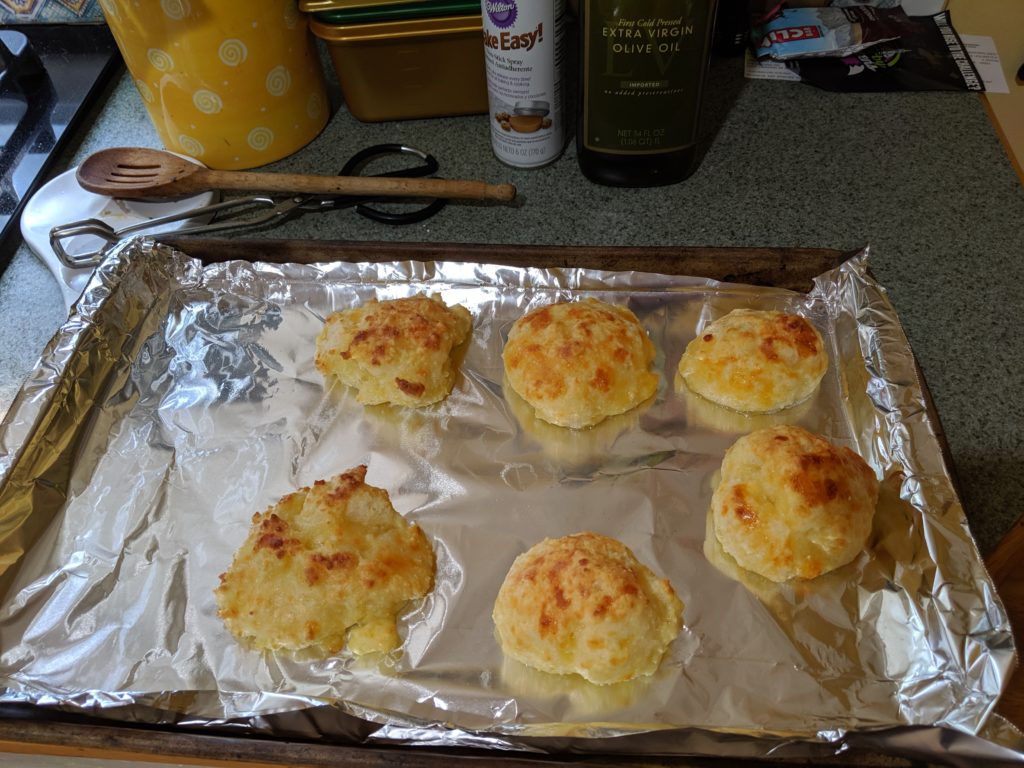 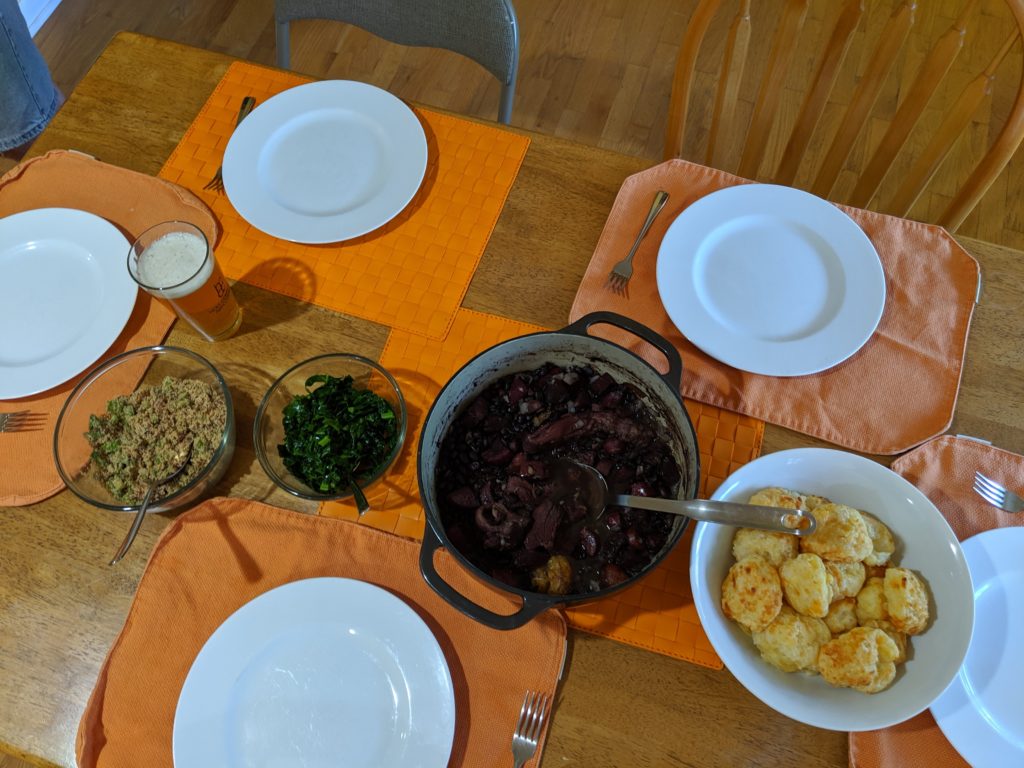 Sadly, this is where we UTTERLY FAILED in our documentation.  We had guests!  These meals are always better with guests, and our friends Alexis, Sandro, and Isla were delightful company.  They even brought dessert!  But did we take a picture with our friends?  We did not.  We didn’t even take a picture of the dessert until we had eaten half of it.

Sandro is himself Brazilian, and was able to confirm that we had gotten everything pretty close to right!  The stew was rich and porky, the toasty farofa soaked up the fattiness very well, the collards were a nice bit of actual greenery and the cheese bread… Oh man, the cheese bread.  The cassava flour gave it a much chewier texture than a standard American biscuit, and they were incredibly satisfying.

Here’s the desert they brought.  It’s called Manjar Branco, and it’s a coconut pudding made in a bundt pan, and usually accompanied by some kind of fruit.  It was so tasty we ate most of it before we even remembered to take a picture. 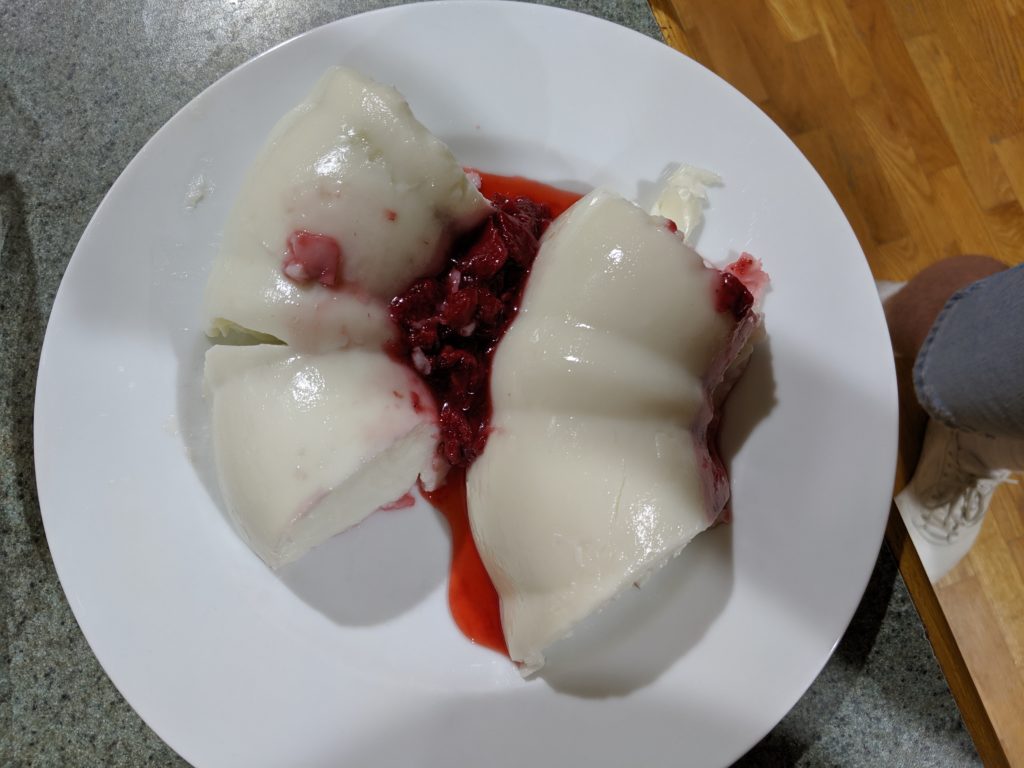 In summary, Brazil was definitely one of the better meals so far – all of the dishes were delicious, they worked well together, and the company was great.  You may notice that all of the recipes are from the same source on this one – I figure if this guy wants to do all my homework for me, why not let him?

Next up is Brunei, and I am vaguely terrified of this one…