I was nervous about this one.

Unsurprisingly, I’m not the first person to have had the idea to cook my way through the alphabet.  I follow several other blogs dedicated to the same project.  The most thorough of these is Cooked Earth – a site whose author is MUCH more rigorous than we are.  He won’t substitute ingredients, he does months of research, and his presentation is amazing.  Of course, he also lives in New York, and thus has access to a LOT more ethnic grocery stores than we do.

His opening sentence for his entry on Brunei was “Guys. This one almost broke me.”  He goes on to uses phrases like “fermented Durian.”

Needless to say, this did not inspire confidence.

But on we went.  Brunei is a very small country, so finding dishes which were uniquely Bruneian and not regional was a challenge, but there is one dish that everyone agreed was the national dish – ambuyat.  Ambuyat is boiled sago palm starch.  It’s apparently like nachos, in that there’s not much flavor to be had in the thing itself, but it serves as a vehicle for condiments. (Which can include the aforementioned fermented durian, but dear god, no.)

So, ambuyat it was, with a pair of dips.  In addition, I found a recipe for buttermilk chicken (which does not involve any buttermilk at all) which was described as the recipe that Bruneian college students abroad write home to ask their mothers to send them.

One thing that several sites made clear that sago is NOT the same thing as tapioca, so if we wanted the authentic experience, we needed to get sago, not tapioca. 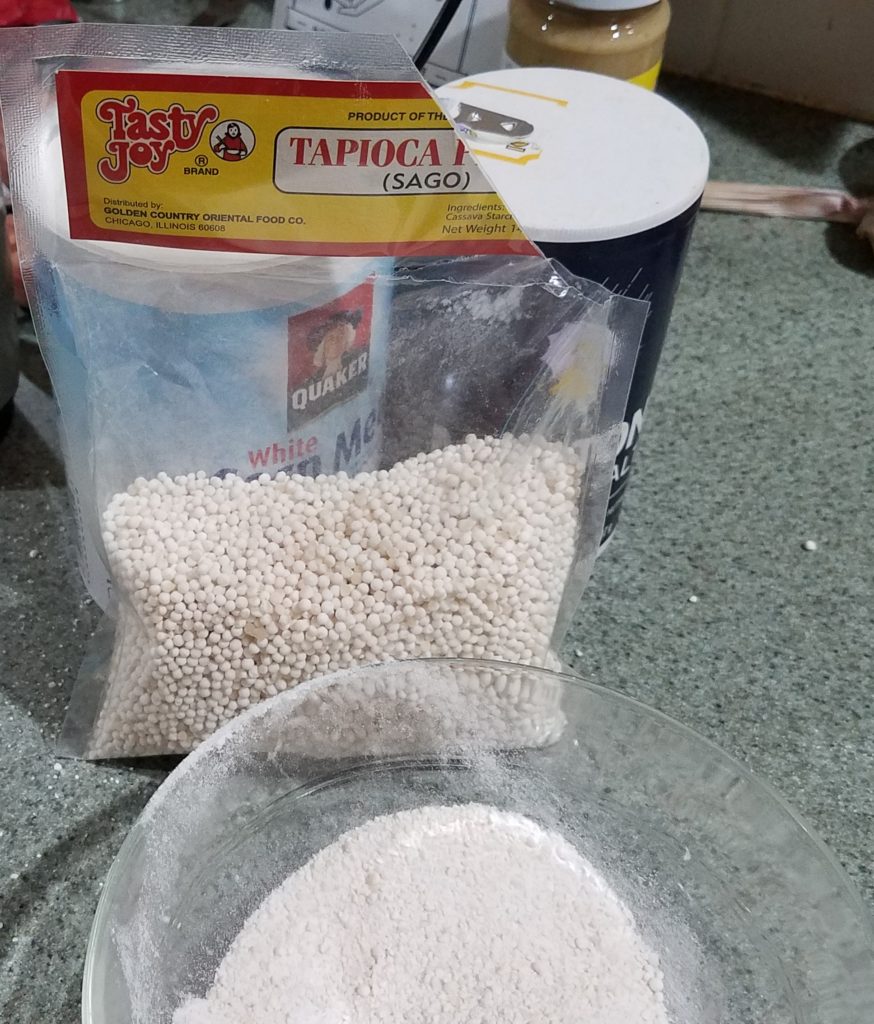 I have no idea.

But we took the sago pearls and ground them up as fine as my battered old spice grinder would get them.  Meanwhile, Leigh was frying chicken: 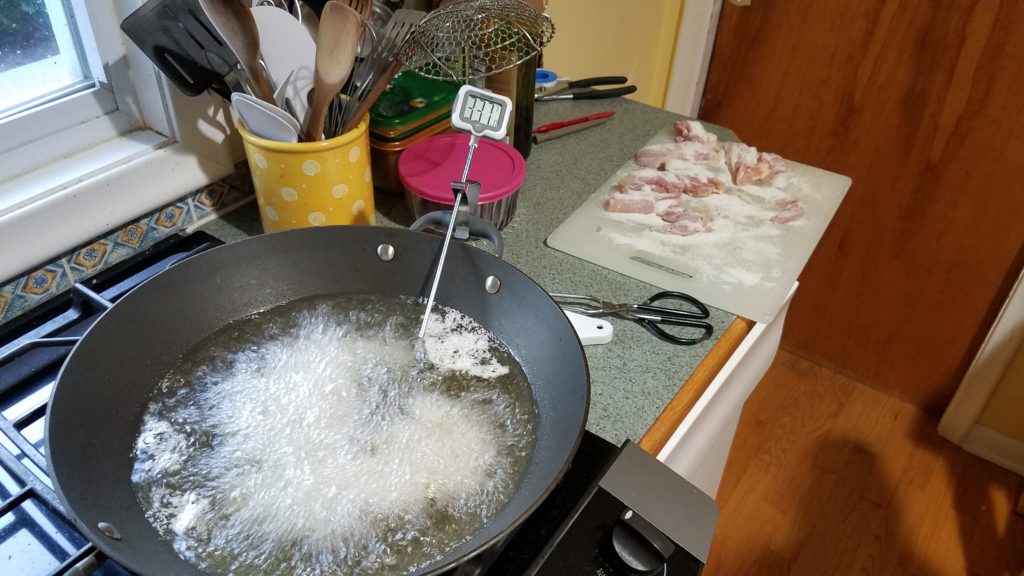 We don’t do a lot of deep frying, but this seemed to work out OK.  We still had some peanut oil left over from Belgium, which was (checks notes)… oh dear ago.

Next, we assembled our two sambals. The first was a mango sambal which would traditionally have used a local variant, but we were assured was fine with any old mango we could find.  We mixed it with shallots, chiles, and garlic, for a very unfamiliar mix of flavors: 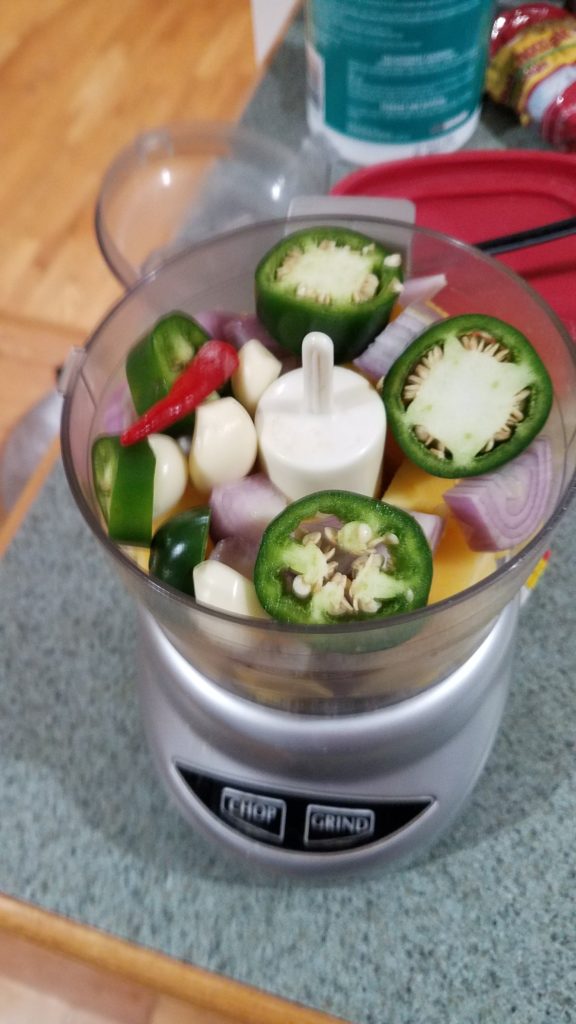 The other sambal involved shrimp paste, chiles, and calamansi lime juice. (An asian lime juice which is intensely sweetened.  This stuff is GREAT with tonic water – I recommend getting some if you can find it.) The intensly fishy, salty shrimp, combined with the hot chiles and sweet lime juice resulted a flavor which is probably one of the most… foreign to our palates so far in our trip.  It wasn’t bad, but it definitely had notes that my brain wasn’t used to processing as “this is food.”

Meanwhile, we finished the chicken and made the sauce. “Buttermilk Chicken” apparently actually means “Chicken with Butter and Milk.”  But that’s OK – we LIKE butter and milk. 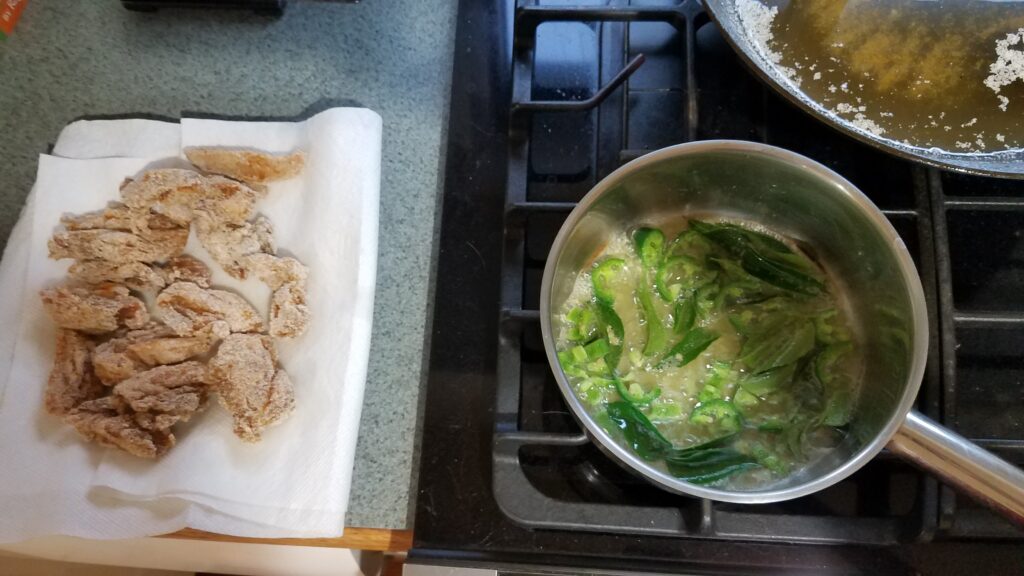 Also chiles.  Because of course chiles.  Curry leaves as well, which is an ingredient I use all the time for Indian cooking.

Finally it was time to make the ambuyat, by pouring boiling water over the ground sago starch, and bring the whole thing to the table. 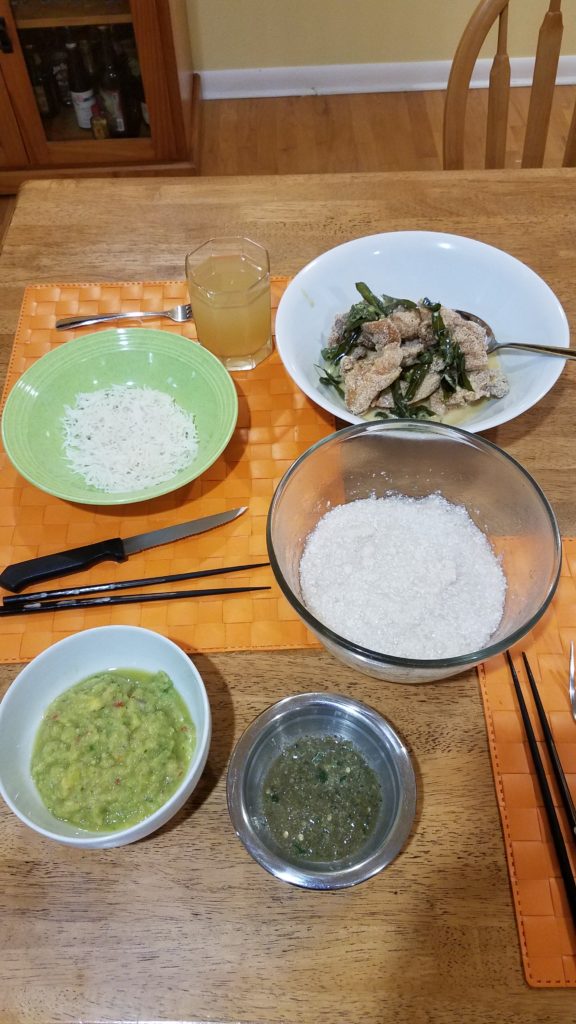 Clockwise from upper right: Buttermilk chicken, ambuyat, sambal belacan, sambal cacah, bog standard basmati rice.  (I don’t even know if basmati rice is reasonable for Brunei, but I had forgotten to soak the sticky rice that would probably have been more appropriate.)

The ambuat was.. fine.  The texture was a bit less smooth than it probably should have been but it reminded me of nothing so much as slightly stickier grits.  Dipped in the sauces, it provided a perfectly acceptable medium for moving sauce to our faces.

The buttermilk chicken, on the other hand, was delicious.  Would definitely eat again, if deep frying weren’t such a major pain.

So there you are – we survived Brunei, and it was much less terrifying than I thought it would be. Next time we’re back to Europe for Bulgaria.