We’re back in eastern Europe, which means it was time to once again consult my friend Walt.  He was a big help with Bosnia, and Croatia is on the horizon, so I’m sure we’ll be hearing from him again. (If you haven’t checked out his band’s page yet, you should!)

So, Bulgaria.  I had found a recipe or two, but Walt sold us on trying to put together a fairly substantial meal, consisting of a soup, two salads, bread, a main dish, and dessert.  The clock had also been started ticking by the fact that we found some Bulgarian style feta cheese at our local farmers’ market, and so had to use it while it was still fresh.

Bulgaria didn’t require a lot of exotic ingredients – no wacky chili peppers that take a month to arrive or cream that requires a drive to Detroit.  Lots of cucumbers, peppers, onions, and a pumpkin.  So without further ado, the dishes. (We didn’t take a lot of “in process” pictures this time.) 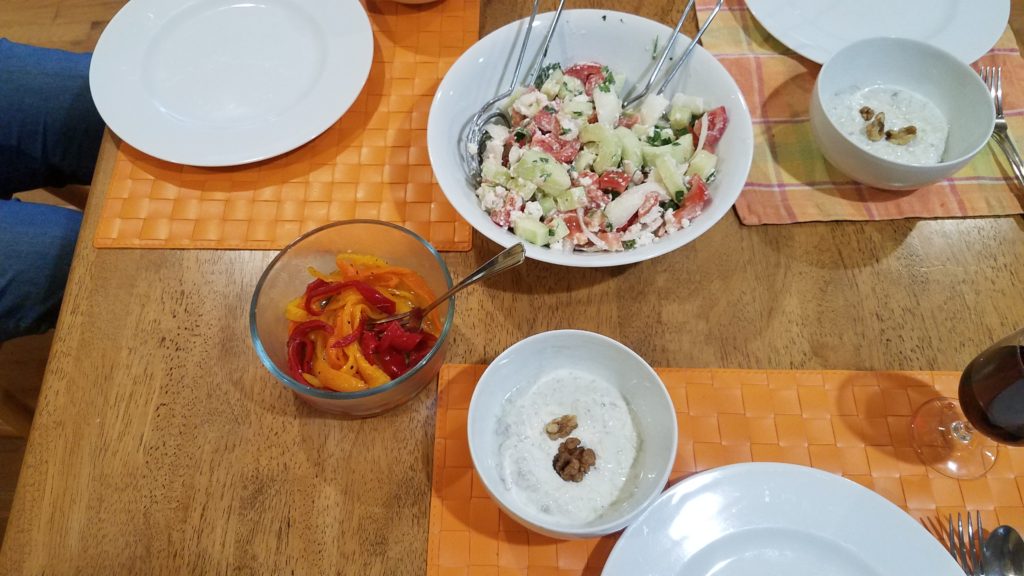 To start the meal off, we had what I’ve seen repeatedly described as Bulgaria’s national dish – Shopska Salata… which turns out to be a pretty darn conventional salad.  Tomatoes, cucumbers, raw onion, and the Bulgarian feta.  The feta is what really makes it distinctively Bulgarian – it’s smoother and creamier than Greek feta, and made a nice starter for the meal. But it’s certainly not something that felt exotic.

On the other hand, the soup certainly was a little outside of our normal range – it was a cold yogurt soup with cucumbers and walnuts called tarator.  But not just any yogurt – Bulgarian yogurt!  OK, fine, Bulgarian style yogurt.  The good news is that you can find it at Whole Foods, and that really is good news, because the stuff is very tasty – smoother and tarter than Greek yogurt, it made a great soup when balanced with the crunchiness of the walnuts and the mildness of the cucumbers.

To complete our opening course, we roasted some sweet peppers on the gas range.  Shoving food directly into the fire is fun, but I needed to be a bit more aggressive about it – the pictures I looked at after the fact showed peppers that had been much more fully incinerated than ours had, which explains why the skins didn’t peel off as well.  Still, roasted peppers dressed simply with vinegar and oil were a good complement to the soup.

On to the main course, Gyuvetch. Literally, the word just describes a type of pot. Which, of course, we don’t actually have.  After Walt suggested this would be a good choice of main dish, I spent a lot of time trying to chase down a recipe that a) didn’t use beef, which I was assured wasn’t really authentic, and b) had quantities and cooking times.

I completely failed at b).

So, instead, I found a recipe from a tiny little EU government grant, accompanied by a video of a Bulgarian grandma saying things like “now put it in the oven until it’s done.” So we winged it.

The recipe also didn’t call for any meat at all, so I borrowed some guidance on pork from Walt and another recipe and tossed that in.  The final product consists of veg and pork that is first simmered on the stove until tender, and then topped with an egg and yogurt custard and baked.  It’s not quite a pie, and not quite a stew, but it’s very, very good.  We also made a nice loaf of bread to go with, although it did disintegrate a bit on removal from the oven. 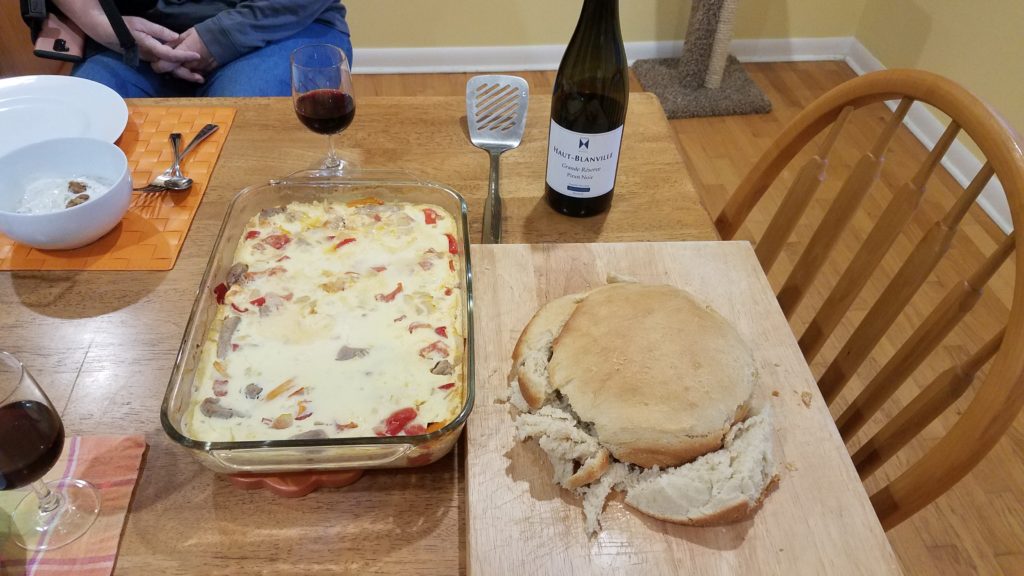 Finally – dessert.  This was actually the FIRST dish Walt said we had to make, and he wasn’t wrong.  Tikvenik is what you’d get if you crossed pumpkin pie with baklava – a sweet, nutty, pumpkin filling rolled up in phylo dough. Yummy. It was so good we forgot to take a picture until we were boxing up the leftovers. 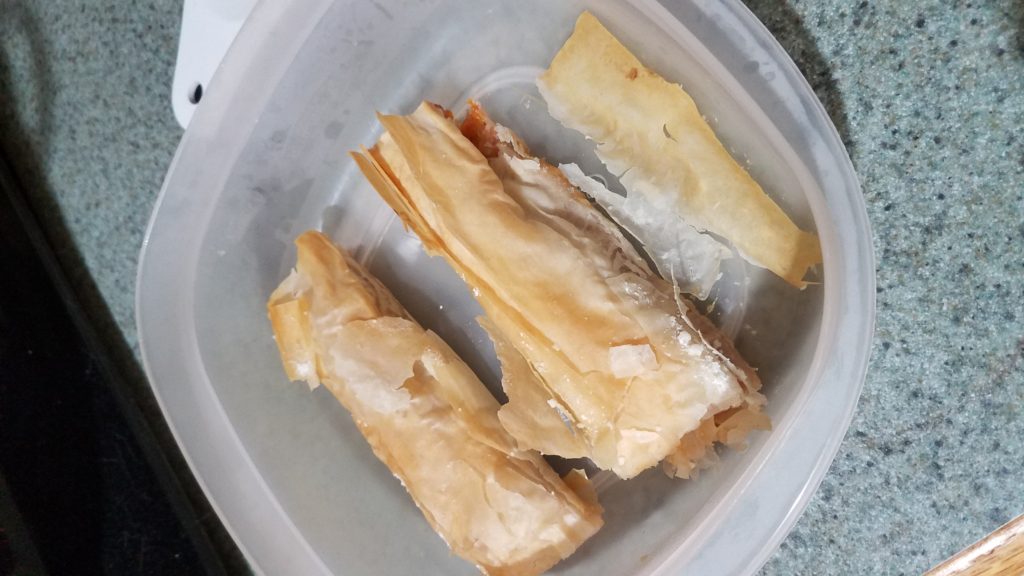 We ALSO forgot to take a picture of our dinner guest, but Laurie was nice enough to come over and share the experience with us, and bring a lovely Pinot Noir to go with.  These meals are always better with friends!

Next up, we have a whole run of African countries, starting with Burkina Faso.