I guarantee we will NOT be maintaining an average pace of an international meal every 4 days for the entire year.  But it’s tasty while it lasts…

Today we head to the Mediterranean island of Cyprus, which has had a long and checkered history. It has at various times been conquered by Alexander the Great, Cato the Younger, Richard the Lionheart, the Republic of Venice, and the Ottoman Empire. It has also been sold outright to the Knights Templar and leased to the British. The twentieth century history of the island is ugly.  The northern third has been occupied by Turkish troops since 1974, and Turkey is the only UN country which recognizes it as a separate state.

But you can’t eat politics, so what makes Cypriot food different than Greek or Turkish food?  In a word: halloumi. What is halloumi, you ask? 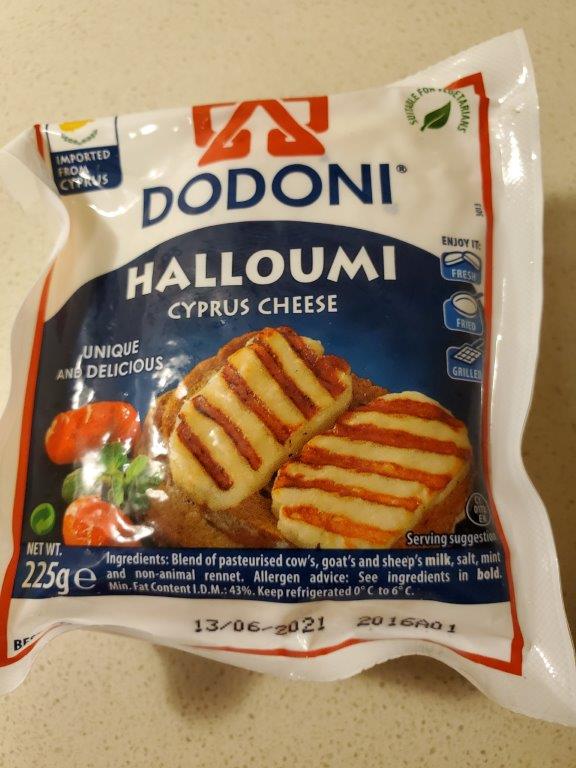 That label ain’t kidding, either – halloumi is indeed unique and delicious. It will turn up in two of our three dishes today, and there’s absolutely no reason we couldn’t have put it in the third one. A traditional preparation, as can be seen on the package, would be to grill slices of this, and it’s also frequently used in saganaki, where it is set on fire.

Wait, why didn’t we set this on fire?  That sounds AWESOME!

We’re making three dishes – a cheese filled pastry, a ground pork and pasta bake, and a side salad.  Another unquestionably Cypriot choice would have been a type of sausage called sheftalia, made with caul fat. Not finding it for sale in our local Mediterranean grocer, and not wanting to go down the road of making sausage from scratch, we opted to skip that one.

Let’s start with the salad.  Apparently the one unique ingredient that would make this an undoubtedly Cypriot salad, rather than just your basic Greek salad, would be caper leaves.  Couldn’t find those, so this is a Greek salad, Feta cheese and all.  This is where we could have tossed in halloumi if we wanted to, but we decided to opt for variety.  While there’s nothing particularly Cypriot about this in its current incarnation, it’s certainly something you could easily eat while you were there. 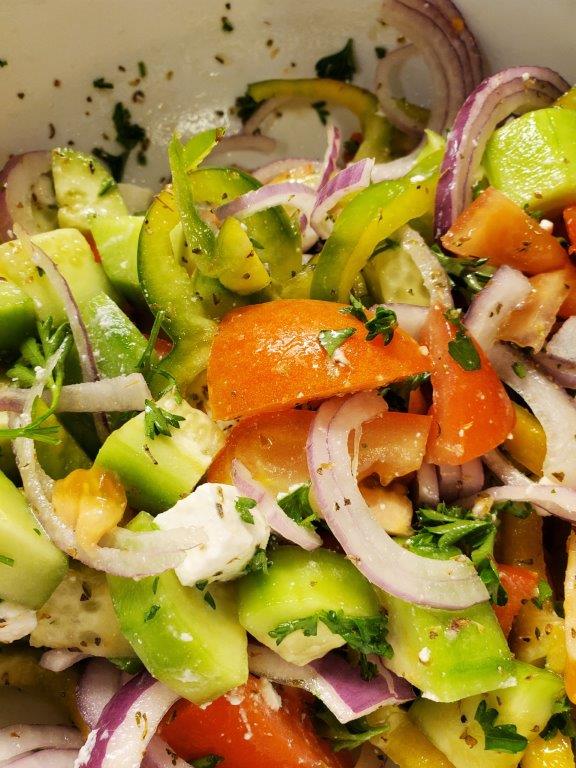 Moving on, our next ingredient was a cheese filled pastry called flaounes. According to the apparently Irish person in THIS video, neither Google translate nor he has the slightest idea how to pronounce it. According to the actual Cypriot person in this video, it’s pronounced “FLAU-neighs”.  But do watch the Irish guy, he’s funny.  He also points out that this pastry was a technical challenge in a Season 6 episode of the Great British Baking Show. More on that later. They are eaten at Easter by Orthodox Cypriots, and as a Ramadan fast breaker by Muslim Turkish Cypriots.

So how do you make these things? First off, you need to make your dough and give it time to rise. This is a yeast raised pastry, interestingly enough.  It’s a pretty standard dough – flour, water, salt, yeast, and olive oil for fat: 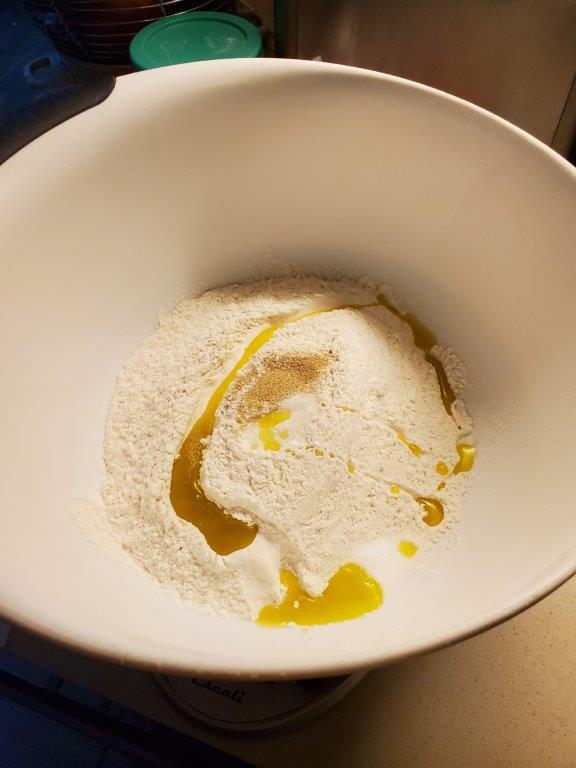 The recipe was a bit vague on quantities.  “Add enough water to make it firm.”  mmkay… Well, we all know variable hydration is a thing in baking recipes anyway, so we took our best guess. It ended up a bit too wet, and we had to add more flour when we were rolling it out to keep it from being a blobby sticky mess.

While the dough was rising, we made our cheese filling.  Traditional flaounes have a traditional mix of traditional cheeses in addition to traditional halloumi that we were NOT able to locate in Vancouver. Other alternatives that are suggested online are havarti, pecorino Romano, and cheddar.  Our recipe called for cheddar, so that’s what we did – grated with the Halloumi, a bit of flour and mint, some baking powder for leavening, and some eggs. Raisins are also SUPER common in these things, but we decided to make the perfectly acceptable raisinless version. (Yes, spell checker, I am sticking with “raisinless” as a word.  Go away.) 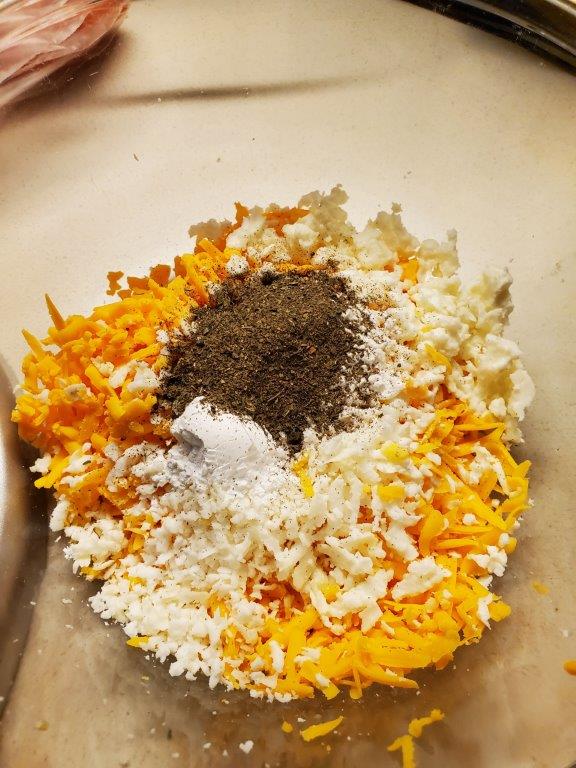 This photo is obviously pre-mixing and pre-eggs. Once the dough had risen and the filling had cooled off in the fridge, it was time to assemble our pastries.  Another point of controversy, in addition to raisins or raisinless (now I’m just screwing with the spell checker on purpose), is the shape in which to fold them.  Triangular and square both seem to be a thing.  We made a few of each. 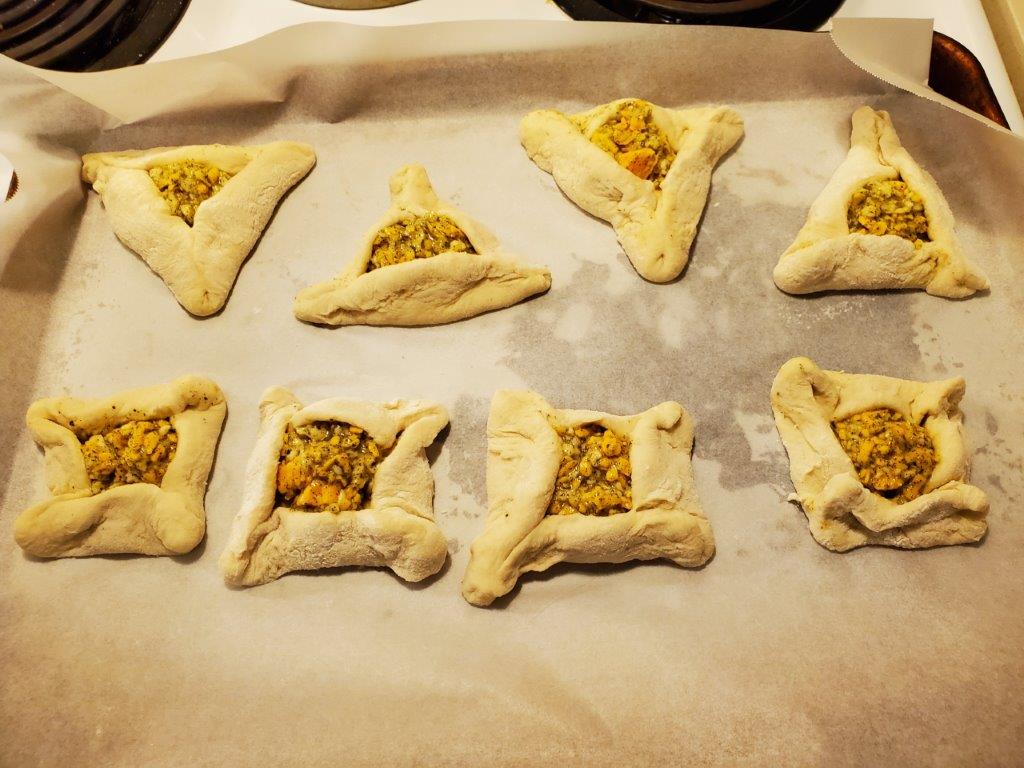 And here’s what they looked like after a quick egg wash and a fifteen minute bake: 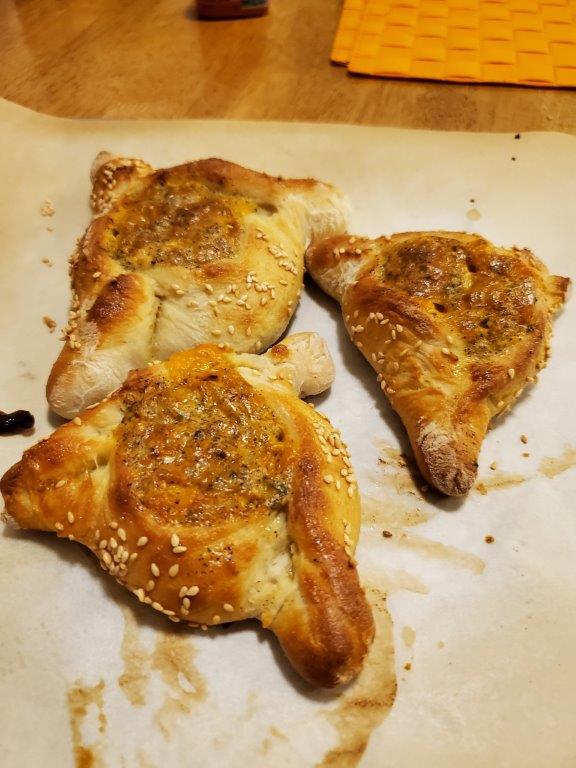 Aren’t those pretty?  And they were VERY tasty.  The dough ended up with the approximate consistency of a pretzel, which makes no sense, because we did none of the things you would do to achieve that consistency in an ACTUAL pretzel. But who cares?  We LIKE pretzels, and we LIKE cheese, and man oh man do we love flaounes.

On to the main dish, Makaronia tou Fournou. Literally, “Oven Baked Pasta,” it’s the Cypriot version of a Greek casserole called Pastitsio. Ground meat, pasta, lots and lots of mint, and a Bechamel sauce on top.  The Cypriot element comes from once again putting in lots of halloumi cheese.

This one’s a bit of a timing challenge, because ideally you want to have your meat, your pasta, and your Bechamel all done at about the same time. This also resulted in somewhat fewer PICTURES of this process.  But here’s all three pots going at once in all their glory: 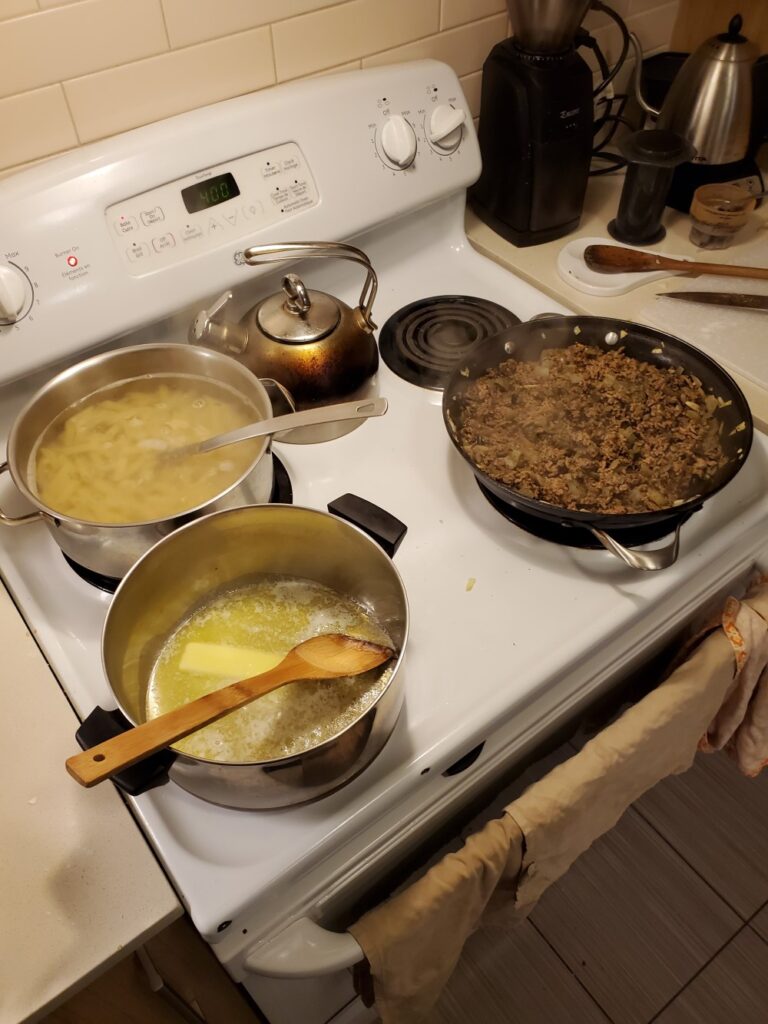 Let’s talk about these one at a time.  Upper left is penne pasta. Salt, water, pasta. Bam. No more talking.

At right is the meat.  Ground pork, in this case, which means this ISN’T the version the Turkish Cypriot Muslims are making. In addition, the recipe calls for onions, cinnamon, a LOT of mint, black pepper, cumin, and white wine.  As I am writing this up, I see it ALSO calls for parsley.  Which we did buy.  Probably should have used that.  Oh well. Maybe I’ll make tabouli this week. 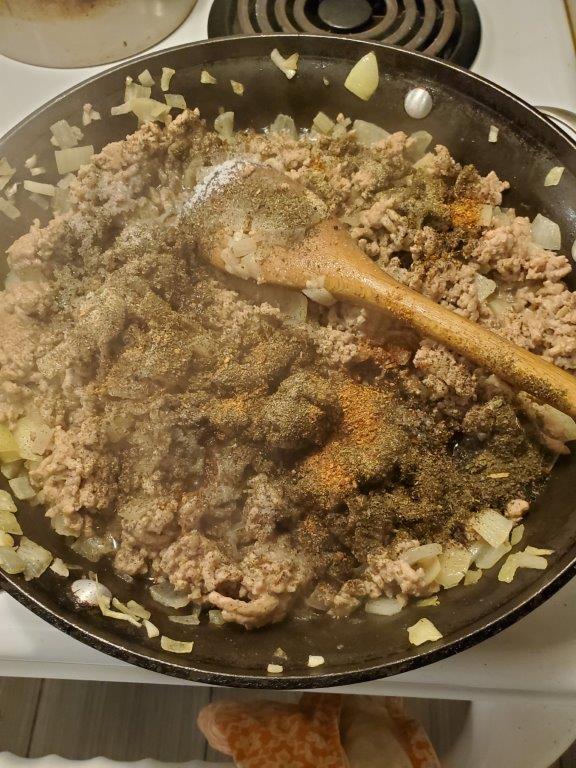 Seriously – this uses a LOT of dried mint. Finally, there’s the sauce.  Bechamel is one of the classic French sauces – it’s a cheesy white sauce thickened with flour.  It can be insipid if you’re not careful.  But we’re using really GOOD cheese here.  No in process pictures, sadly, but the process is “stir continuously for fifteen minutes,” so between that and trying to time the meat and the pasta, we didn’t remember the document this one.  That’s OK – just imagine a pot filled with featureless white sauce and you’re there.

The final assembly is just like a lasagna – layers of pasta, meat, and cheese (more haloumi, of course) topped with a thick layer of sauce and a sprinkle of nutmeg. 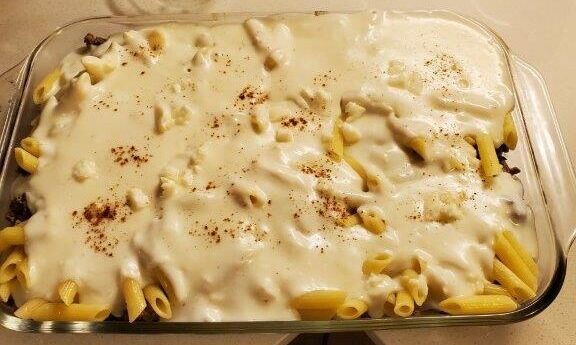 And after 25 minutes in the oven, hellloooo beautiful! 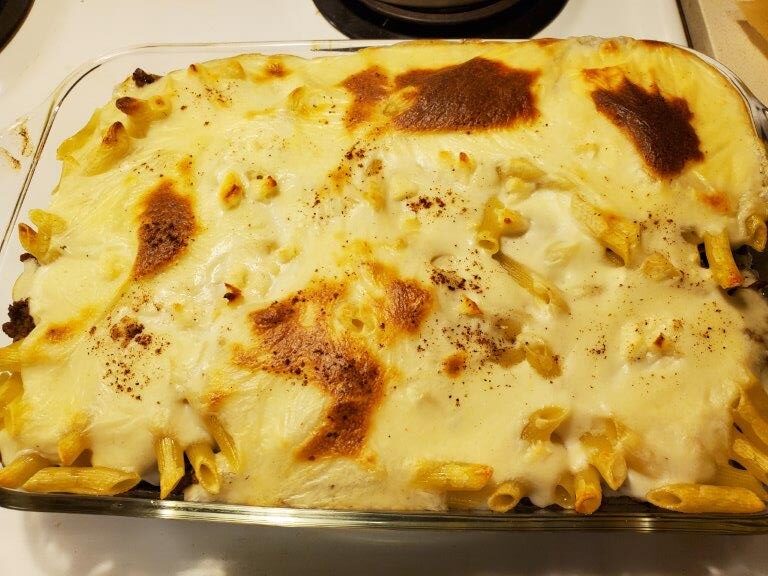 The instructions said to let it cool for… an hour? That can’t be right, we’re hungry NOW.  Well, let’s start with some salad and flaounes. 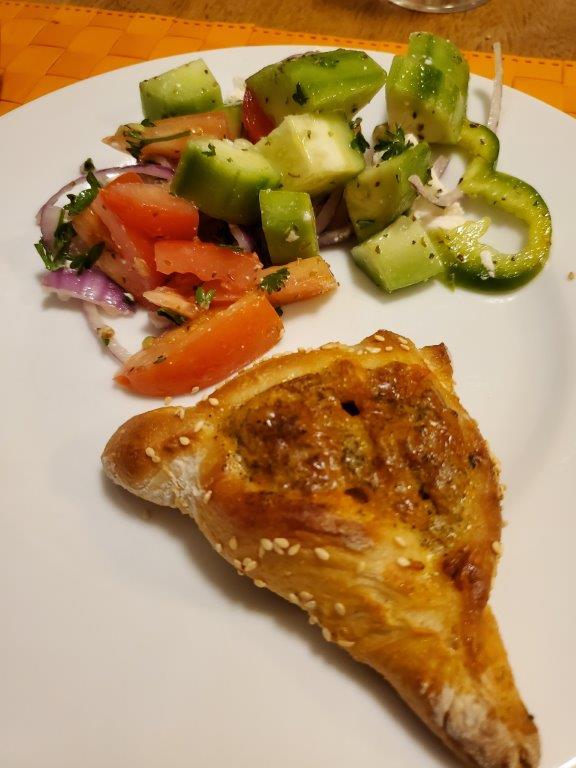 Upon further consultation, the recipe said we COULD go ahead and eat our pasta sooner, it would just be a bit messy. That’s cool, we’re hungry. 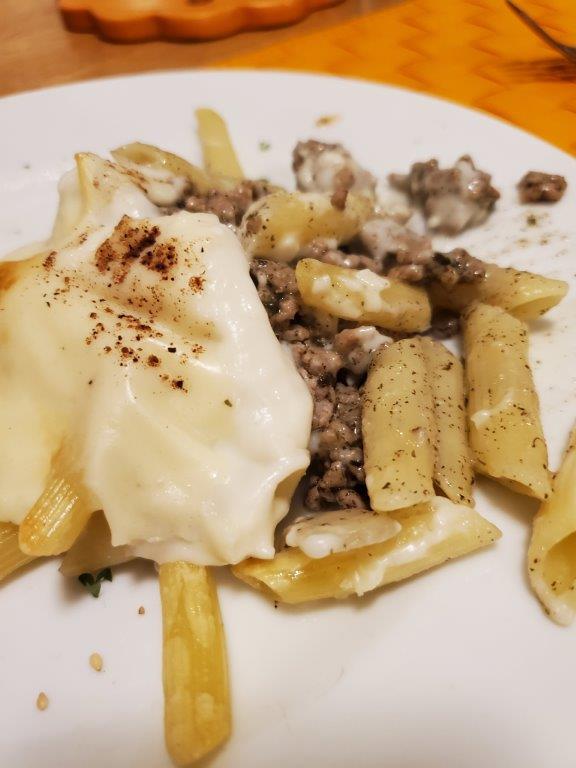 This was very good.  NOT a meal for the lactose intolerant, but with a nice Mediterranean spice palate of mint, cinnamon, cumin, and nutmeg. And tasty, tasty cheese.

Since there were lots of leftovers, here’s a shot from the following evening’s dinner that shows what a slice of this stuff is supposed to look like if you actually let it set up properly.  For starters, it’s supposed to come in units of “slices” not “piles.” 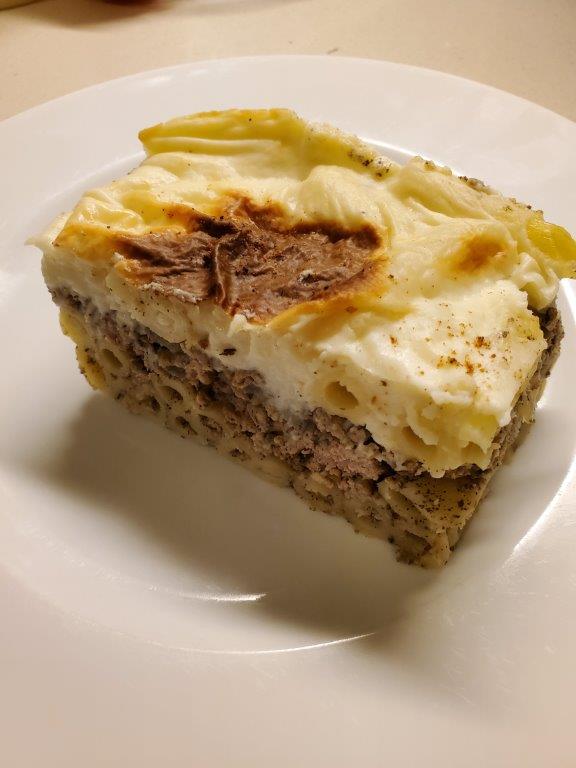 Cypriot food is pretty dang tasty, and we could definitely see making either of these dishes for other people in the future, once other people become a thing again.

A word on flaounes and The Great British Baking Show. A sad void in our pop-culture education was that neither of us had ever watched a single episode.  So, wanting to see what TV bakers would do with these things, we watched the episode in question.

A few observations:
1. GBBS is awesome, and we would like to watch more of it.
2. It is utterly unfair to judge someone for their pastry not looking right when the directions are SUPER VAGUE as to what is “right” and have no pictures.  I loved the show overall, but that part was REALLY mean, and it made me sad.

Next time, our final “C” country, the Czech Republic!