Denmark did not quite go as planned.

I mean, I’m sure the country is doing fine, but our Danish meal ran into a few snags.

One of the quintessential Danish foods is Rugbrød, a particular style of sourdough dark rye bread which is used to make open faced sandwiches.  Having it on the table would be at least somewhat of a guarantee that we were in the neighborhood of authenticity. But we don’t have a sour going right now, and we don’t need a new pet.

Still, Vancouver is an enormous, diverse city – how hard can it be to find Danish rye?  Quite challenging, as it turns out.  There was a Danish baker just a few blocks from my office, which closed in 2018 after sixty years in business.  So that’s a shame.

And then I found La Charcuterie.  Their website lists a HUGE array of Scandinavian products.  Rugbrød! Spiced Herring! Medisterpølse! (A coiled Danish sausage.) And they have a deli attached.  Awesome, right?  It’s an hour drive away, but we can get some great Danish sandwiches, buy the products we want, maybe have a browse around for other things that would work well, and be all set for our Danish meal.

Our first clue should maybe have been that “La Charcuterie” ain’t exactly a Danish spelling.

When we got to the store, which is in a run down industrial park between a motorcycle shop and an auto parts store, there was a line of people out the door.  OK, this is a good sign, right?

Well, no.  Apparently the owner of this shop is a local legend, to the point that there has been an entire documentary made about him.  What he is legendary for is a constant, CONSTANT stream of vulgar stories, and enormous, cheap sandwiches. Turns out we had arrived in the domain of “The Sandwich Nazi.”  Seriously – that’s what it said on the door and on his Facebook page.

The store itself contained almost nothing of the bounty of Danish products advertised on the website – lots of tinned fish, but pretty much nothing else.  No Danish bread. (The sandwiches are on standard sub rolls.) No medisterpølse. No spiced herring.  Heck, not even a choice in what you are being served past “How many sandwiches you want?” (There was a menu on the wall, but it’s apparently just there for decoration.)  You have to pay cash, and you have to make your own change from the huge pile of loose bills sitting on a table behind the counter, because apparently he got busted for not washing his hands between handling money and food.

Oh, and the Sandwich Nazi is apparently Lebanese.

The sandwiches are enormous and overstuffed, but otherwise completely average.  Just a big pile of cold cuts on bread.  Dirt cheap, though – easily four servings from one 10CAD sandwich.

However, we were left with no Danish products whatsoever.

So we went home and bought some Russian Dark rye at Sav On Foods, which is not right, but as close as we could get, and some local pickled herring.

Oh well.  Let’s move on to the actual COOKING portion of the program, shall we?  Denmark had a survey for the official national dish in 2014, and the winner was stegt flæsk med persillesovs, or grilled pork belly with parsley sauce.  Accompanied by waxy potatoes, this is actually a pretty simple dish to make, and represents the third technique we’ve used to cook pork belly in the last two months.  (We also fried it for Colombia, and braised it for Dong Po Pork, which was not part of this blog series.)

To cook the pork belly, it is simply sliced into relatively thick slices and then roasted in a hot oven for 40 minutes until crisp. 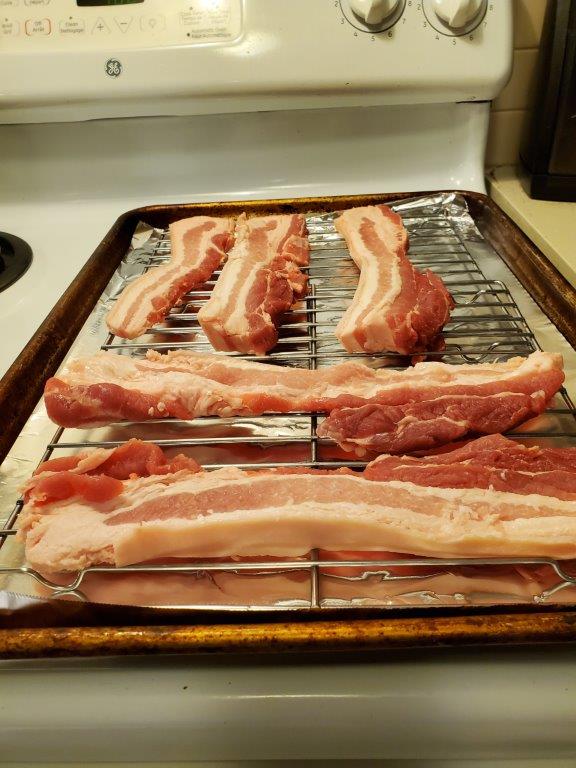 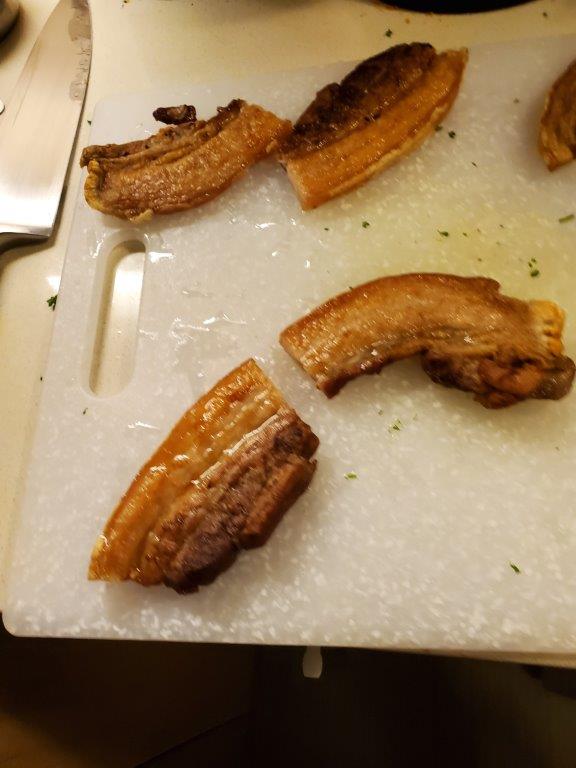 Meanwhile, you make a parsley sauce.  It starts with a butter and flour roux, into which you add milk.  This is cooked until it is thick, and then you season it and add a whole pile o’ parsley. 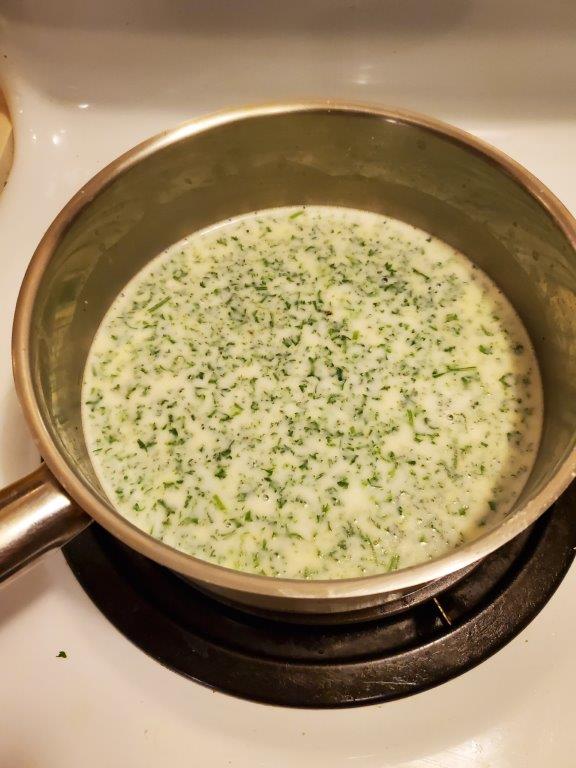 I am relatively certain we did not get this quite thick enough.  It was tasty, but runnier than in the video we watched.

This was accompanied by nicely boiled new potatoes.  Here’s the whole spread: 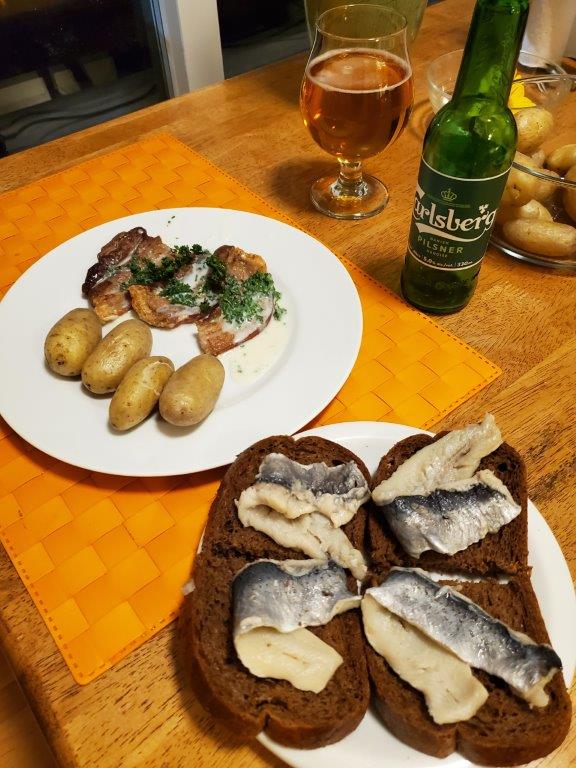 Denmark also has the advantage of being one of the few countries that we can simply walk down the street and easily buy beer from.  We know where to get Estonian beer in Vancouver, but the next time it’s going to be EASY isn’t going to be until Germany. (France?  Maybe?  I don’t know any French beers, but I don’t drink a lot of pilsners.)

But let’s not distract from the meal at hand!  How was stegt flæsk med persillesovs? Quite tasty!  Roasting the pork belly made it deliciously crispy, and drowning it in the parsley sauce (I put a lot more on after taking this picture) was a fantastic flavor enhancement.  The potatoes turned out perfectly, and also soaked up the sauce quite well.  And while the herring and bread weren’t the right herring and bread, they were still delicious.

I will mention dessert, which, while not Danish, was funny.  Nigella Lawson’s recipe of the day for inauguration day was, for some reason, “Bitter Orange Tart.” Can’t imagine why. But since I found some Seville oranges at the Granville Island Market, here it is. 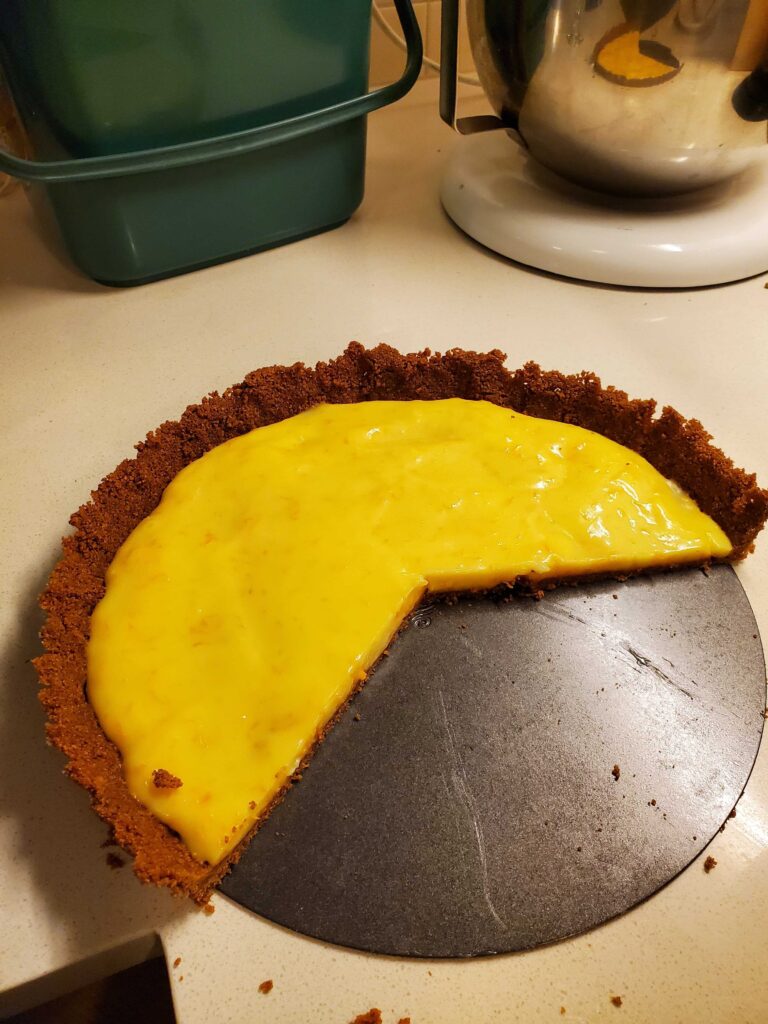 Next up, we head to eastern Africa for the first time since Burundi with the small nation of Djibouti.