Sometimes, this blog has long stories about the hunt for ingredients, or the problems of authenticity and colonialism, or moving to a foreign country during the apocalypse.

And sometimes we just make a straightforward recipe or two with readily available ingredients.

Our biggest concern coming into this week is that we have four countries coming up soon that are all in fairly close geographic proximity: Djibouti, Egypt, Eritrea, and Ethiopia, and that it might prove challenging to differentiate them.  But – it turns out that each one has an acknowledged national dish, and, miracles and wonders, they are not even tiny variants of the SAME dish.  They also don’t seem to involve endangered species.  That’s NEXT week…

Djibouti is a small country in East Africa at the exit of the Red Sea.  Its present borders were established when France decided it needed a way to keep an eye on the Suez canal, and did the imperialism thing.  The country has been independent since 1977.

Less important than the political borders, however, is the fact that Djibouti is a seaport with easy access to Africa, India, and the Middle East, and the cuisine combines all of those influences.  The acknowledged national dish is a lamb and rice dish named Skoudehkaris, which bears a strong resemblance to an Indian biryani.

The cooking is pretty simple – first brown the lamb in a heavy pot. 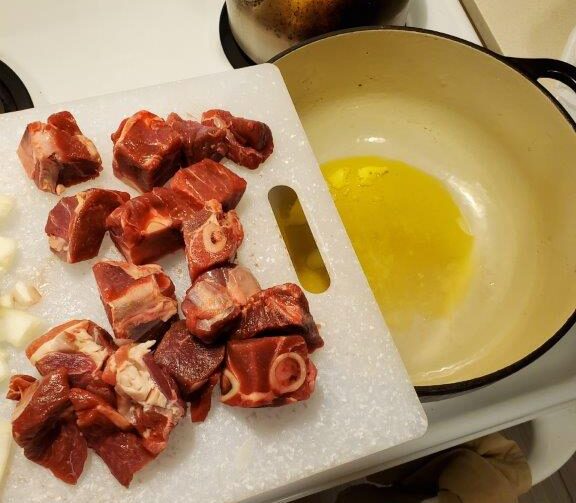 Once it’s seared, add some onions, garlic, tomatoes and spices. 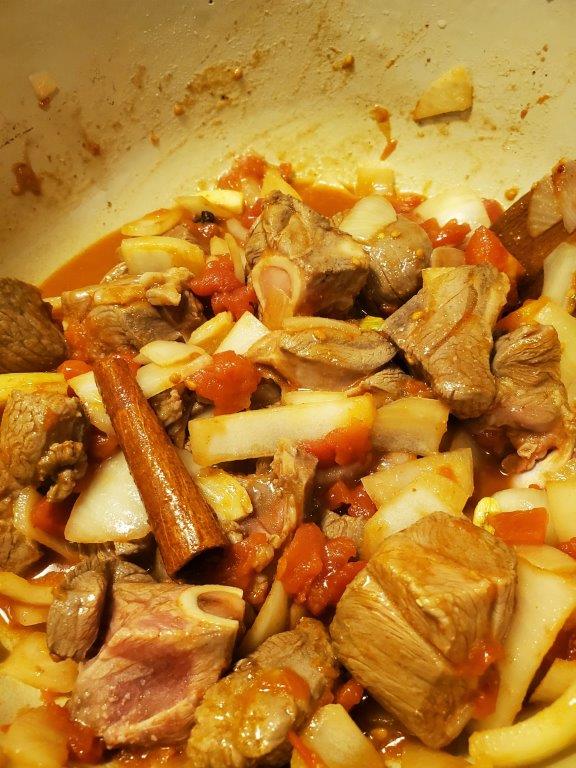 This spices in this case are a pretty standard mix of “c” spices – cinnamon, cloves, cayenne, cardamom, and cumin.  There are different versions of this recipe online, and we kinda took an average between them.  One of the question marks was whether to cook it on the stovetop or put the pot in the oven.  We opted for the oven so we could use the stovetop to make bread. Everything got covered with water, and in it went.

So… bread.  The traditional Ethiopian bread is injera, which is a delicious sour, spongy flatbread.  We have also failed miserably every time we’ve tried to make it.  Fortunately, Djiboutian breads tend to be closer to the Sudanese laxoox style than the Ethiopian style, meaning they are slightly thicker, and use millet or sorghum flour instead of teff. 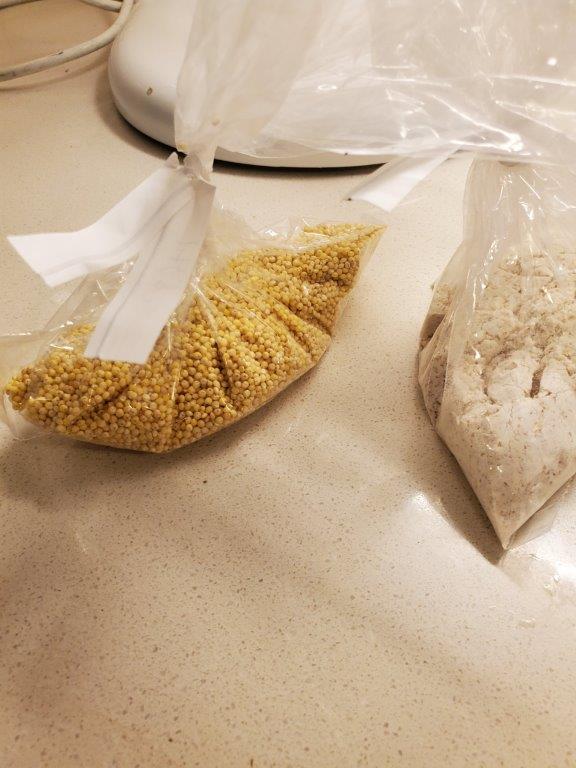 The recipe we used called for a mix of millet flour, whole wheat flour, and regular flour.  Since we already have WAY too many types of specialty flour cluttering up the cabinet, I was happy to discover that our local grocer had whole millet in the bulk section, so we just made our OWN damn flour, in a nice small quantity.

The flour gets mixed with yeast and left to rise overnight, until it’s nice and bubbly. 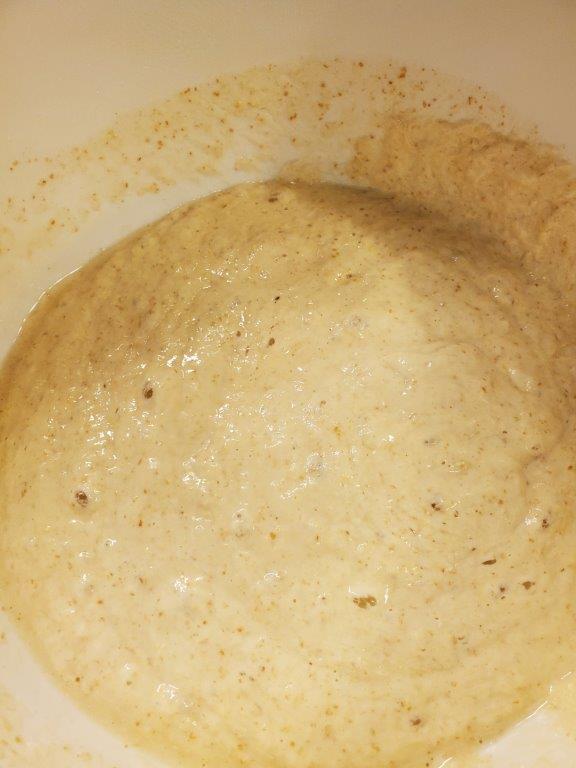 This is definitely much closer to a batter than a dough.  It’s a little thicker than pancake batter, but not much.  The hard part was getting it to achieve the nice dry texture on one side without burning on the other side.  We had… mixed success at this.  Leigh definitely did better than I did. 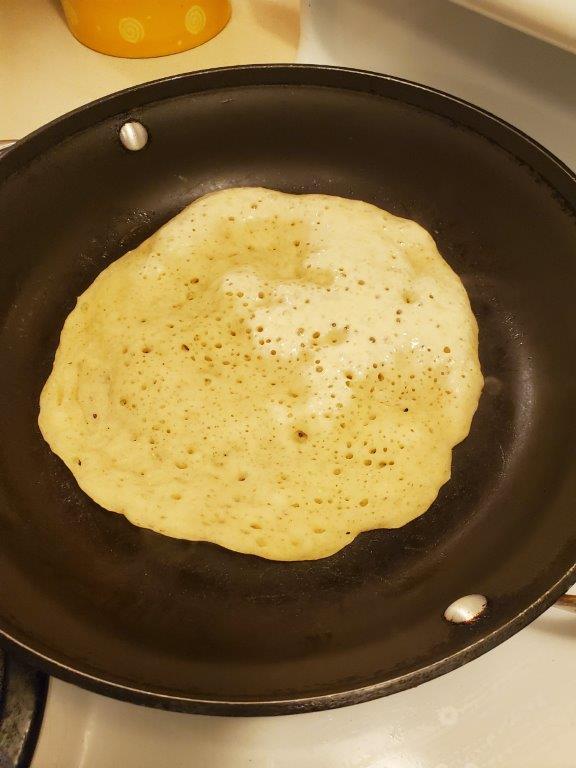 This is a pretty good “in progress” shot – the texture is bubbly, which is right, but you can see some of the dough is still raw.

As we were finishing up the flatbreads, the stew came out of the oven.  Unlike most Indian biryani recipes, this recipe does NOT call for precooking the rice at all – the raw rice just gets hurled into the pot and left to cook and soak up the liquid until it’s ready to eat.  On balance, we should have probably used a bit MORE liquid, as the final product didn’t have as much sauce as the illustrations in the recipes. 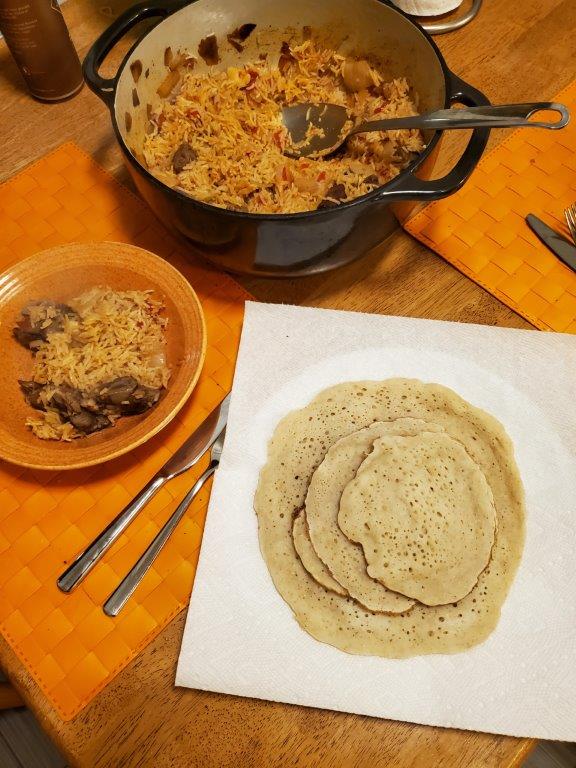 And there it is – a one pot lamb and rice stew that took next to no effort to make, and some nice chewy flatbreads to eat it with. No drama this week at all.

And it turns out – no drama can be pretty darn tasty!  The rice soaked up all the spices and was very flavorful.  The lamb turned out perfectly cooked, and the flatbreads that weren’t either raw or burned (i.e., the ones Leigh made) were perfect for scooping everything up together.  I would heartily recommend this stew as a midweek meal, as long as you can wait the hour or so it takes to cook.

A note on the recipes – both of the version of this stew that we consulted come from slicker, more professional “Recipe around the world” blogs than ours.  There’s always a BIT of a concern going to “international food for westerners” sources that they’ve been dumbed down, but as far as we can tell, this really is the basic outline of the recipe.

Djibouti –  your food is tasty! And, we appreciate not having to drive halfway across Canada for obscure cooking supplies for a change.  Next week, the tiny island of Dominica, which is definitely NOT the Dominican Republic.