Finland was fun.  By which I mean, our actual trip to Finland was fun.  Leigh had a conference there in 2009, and I tagged along. We have LOTS of pictures of that trip – we should really write it up for this, our alleged vacation blog, one of these days. But for right now, I’ll just give you this and let you wonder. 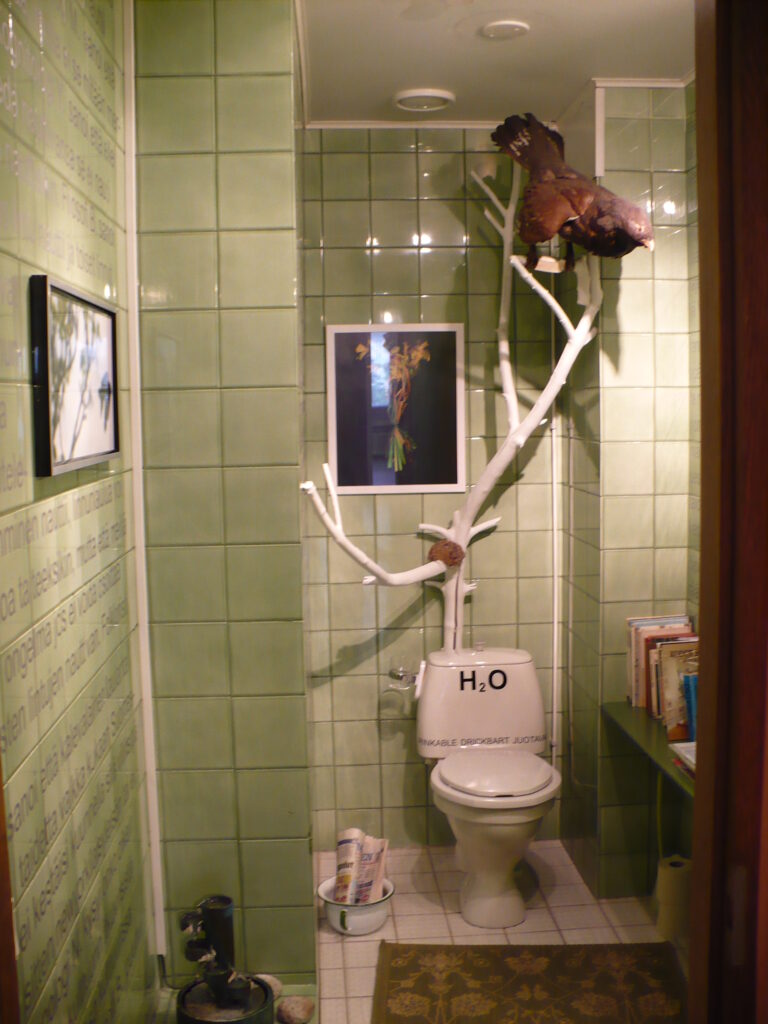 For the present project, Finland turned out not to be a single meal, but a bunch of stuff spread out over several days.  Since one of the recipes called for vanilla sugar, that meant we would have to use up the contents of a vanilla pod for some other purpose. Difficult as it was, we made the ultimate sacrifice and forced ourselves to consume a crème brûlée.  It was awful, let me tell you – the things we do for this blog. 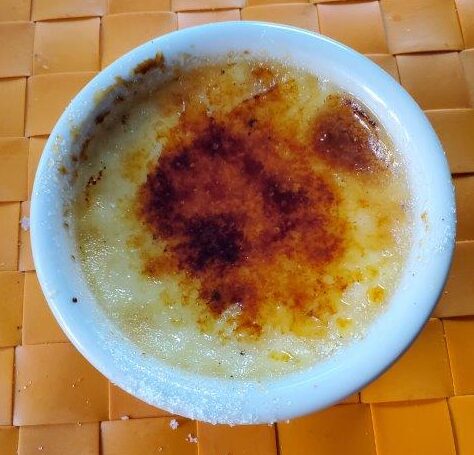 So what was the vanilla sugar for, you ask?  One of my fondest food memories of our time in Finland was of a ubiquitous pastry – the cardamom bun.  They come in lots of different shapes, but what they all have in common is a lovely soft dough with lots and lots of cardamom in.

The version we picked, by virtue of it seeming to have been posted by an actual Finnish person, looks like a traditional cinnamon roll. First you make an enriched yeast dough with lots of cardamom in it, then after it’s had time to rise, you roll it out flat, then coat it with butter, sugar, and cardamom, cinnamon, or some combination of the two. 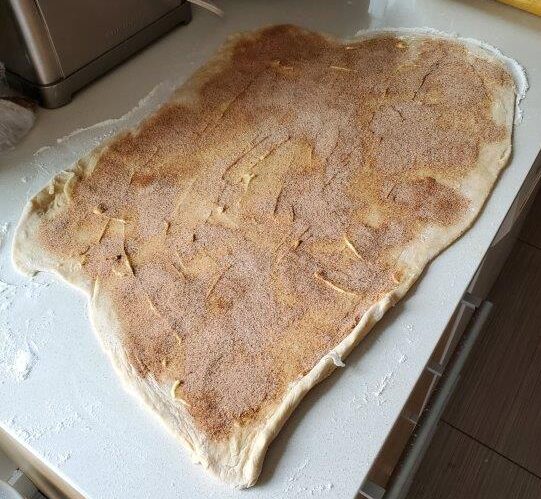 This is then rolled up and sliced into rounds. 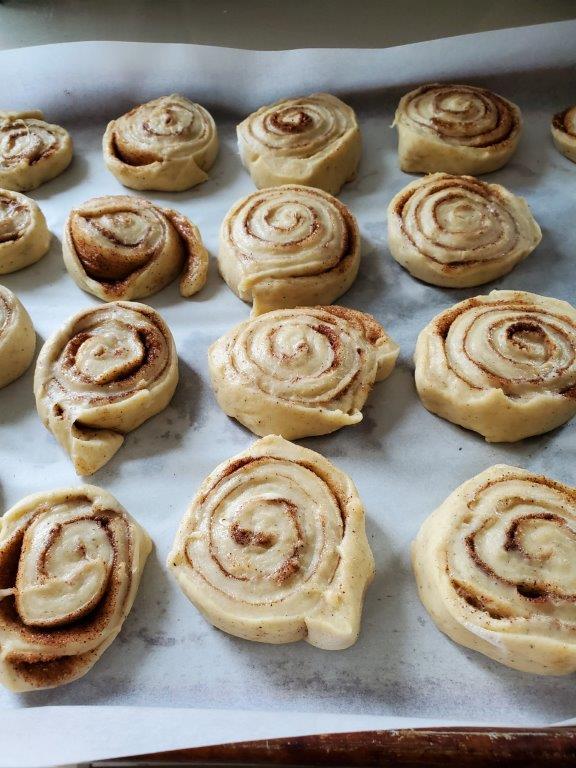 An egg wash and a bake later, and we were rewarded with these beauties: 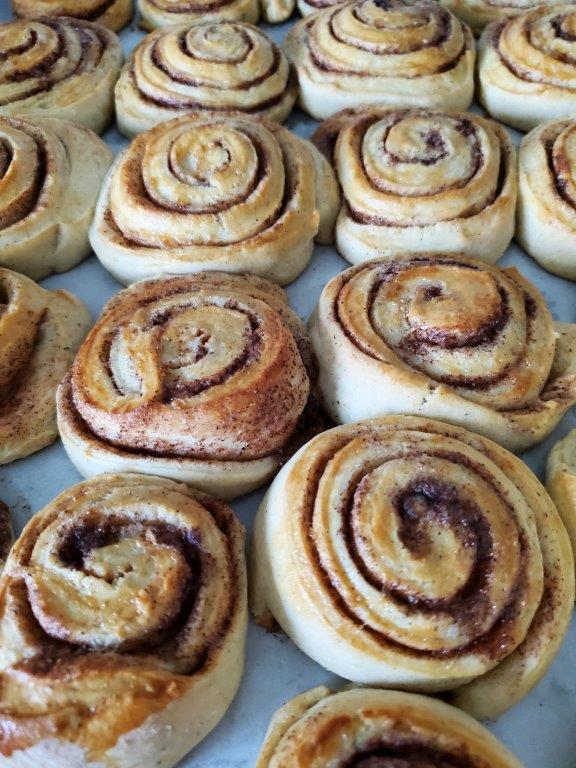 They may not be as beautiful as a cookbook, but they tasted amazing.  When we make large batches of stuff for this project, I often take the extras into work for my colleagues. NOT THIS TIME – the cardamom buns were ALL OURS.

Next up, we had planned to make two traditional dishes from Karelia – a stew and some pies.  However, two things prevented this from coming off according to the plan.  The first is that I got my COVID-19 shot the day before we had planned to make all the pies, and the attended soreness diminished my enthusiasm for doing much besides lying on the couch binging Agents of S.H.I.E.L.D. and complaining.

The more important thing, however, is that we realized that the stew and the pastries bake at COMPLETELY DIFFERENT TEMPERATURES, and so better planning would have been required to have them both ready at once.

Lets get the stew made, anyway.  Karelian Stew was recommended as a good choice for an archetypal Finnish dish by my local friend Puppy Shredder.  Karelia is a region of Finland which….

Yes, I have a friend in Finland who I refer to as “Puppy Shredder”.  Roller derby, right? 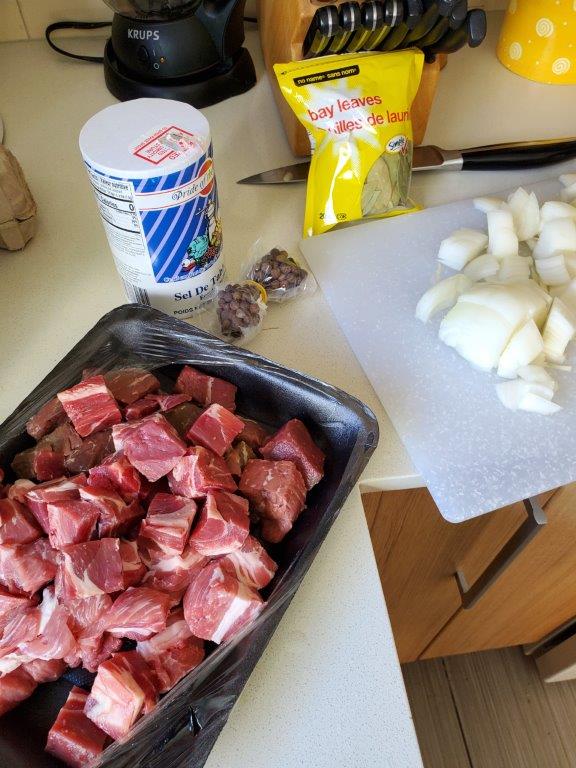 We chose to go maximally fancy and used three kinds of meat – lamb, pork, and beef.  Apparently the pork and beef version is so common in Finland that at many stores you can just buy “stew mix” which consists of pork and beef cut to appropriate size.  Not having that option, I had to manually cut the pork shoulder in to pieces myself! AND I had to cut up the onion.  SO MUCH WORK.

I kid, because cutting up the onion and the pork was literally the only work involved in making this dish.  You then just donk it all into a pot with some water, put it in the oven, and walk away for three hours.  The only other direction in the recipe we used is to put the lid on the pot “towards the end of cooking.”  Super helpful, that.

You’d think with all that extra time, I’d have remembered to take an “in process” shot of the stew, but I didn’t.  Thanks, AstraZeneca!  (No seriously, thank you – I am SO ready for this pandemic to be over.)

We did make what was ostensibly a Finnish version of mashed potatoes to go with.  It wasn’t terribly different from any other mashed potato recipe – peel, boil, mash with cream and butter.  The one interesting step was that it called for putting these potatoes back in a casserole, covering them with bread crumbs, and then baking them for an indeterminate length of time.  (One recipe I found called for a SIX hour bake!)

We didn’t have that length of time, and we only had Panko bread crumbs, which are from (checks notes) not Finland.  So they weren’t terribly authentic in any case.  But they were mashed potatoes with cream and butter, so what’s not to like?  They made a great base for the stew. 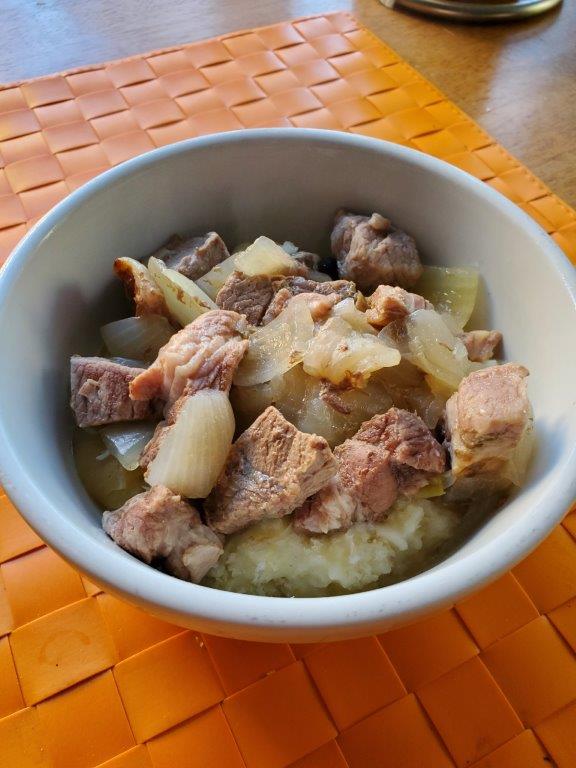 Before I talk about how things tasted, lets talk about the pies.  We made them the following evening, and since we had leftover stew, we WERE able to have more or less the whole meal as intended on the second evening.

The Karelian pies are a savory unleavened dough filled most often with rice porridge.  They are NOT sweet – the filling is just rice, milk, and salt for the version we made. 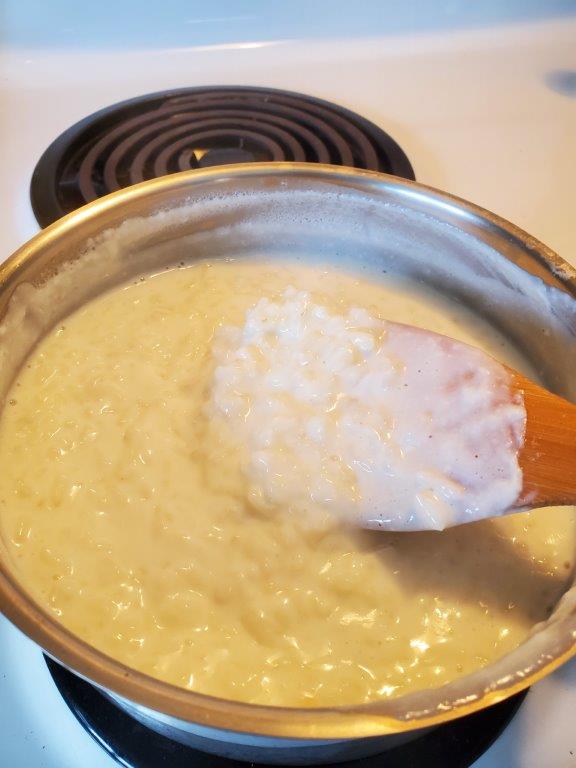 That gets cooked down for an hour and then put in the fridge overnight (or two, in our case) to cool down.  The dough is equally simple – rye flour, all purpose flour, salt, and water.  Mix it together and roll it out: 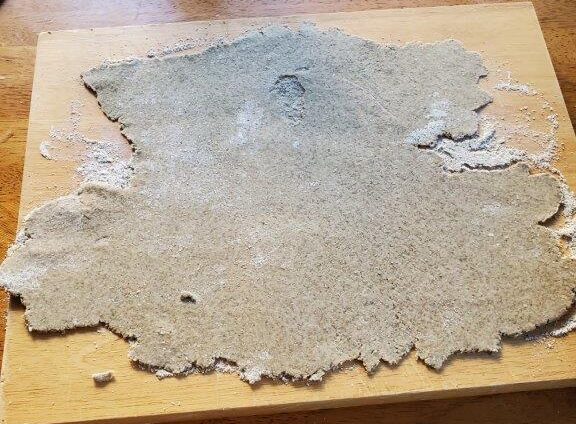 Being a rye dough, it’s not the most exciting color in the world. But we had a TON of rye flour left from Estonia, so it’s good to keep using it.  We punched out little rounds of dough, and then formed an assembly line of rolling, filling, and shaping. 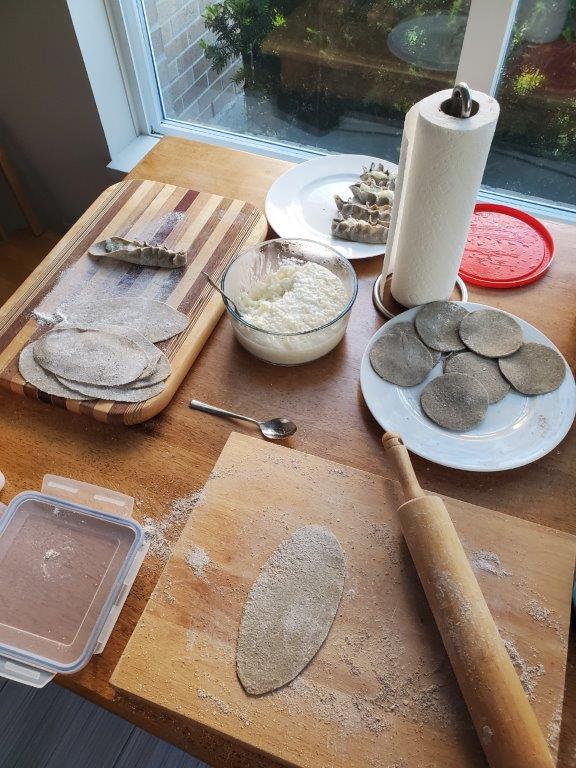 You can see some in-progress pies top center.  The shape is certainly unique, and that’s not JUST because we are terrible at making them.  They’re SUPPOSED to be a unique shape.  The pies are baked for 15 minutes or so at the hottest temperature your oven can achieve.  (Spoiler: not all that hot, for ours) 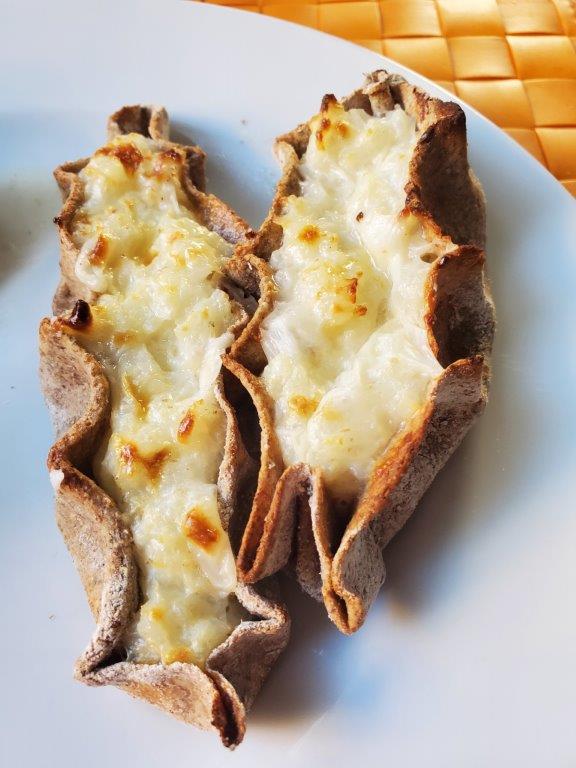 Definitely not quite the shape in the picture we were going from, but still identifiably the thing we were trying to make. Authentically, these would be served with a spread consisting of butter and hardboiled eggs, but neither of us LIKES hardboiled eggs, so even though we used authentic Finnish panko on the mashed potatoes, we decided to skip that extra detail here. 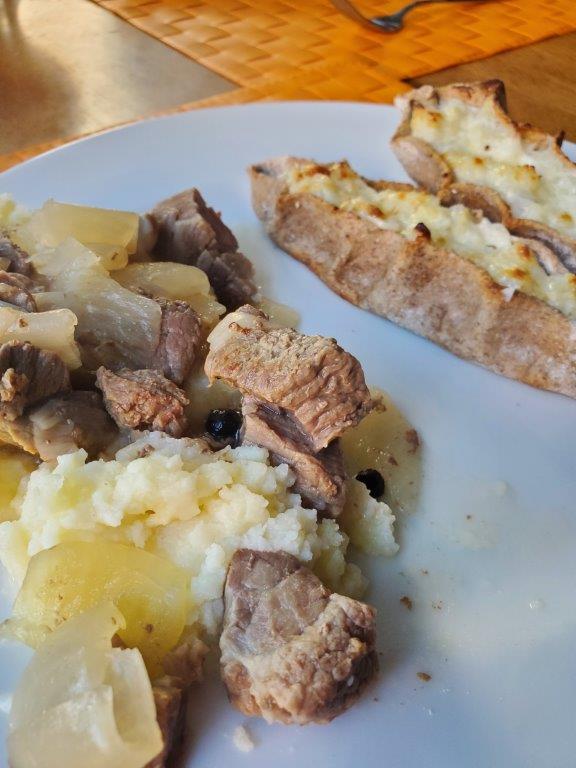 I gotta say – for only having six ingredients, the stew had an amazing depth of flavor.  The long cooking time drew all the flavor out of the bay leaves and allspice, and the broth was super deep and complex by the end. The flavor to effort ratio for this stew is just ridiculously excellent The pies were quite good too – a nice mix of chewy and crunchy on the outer layer, and a hearty filling from the rice porridge. .

In fact, the broth was SO good that we kept the extra, and two nights later used it to make the traditional beef noodle soup of Finland, pho.

Wait a minute, let me check my notes again… 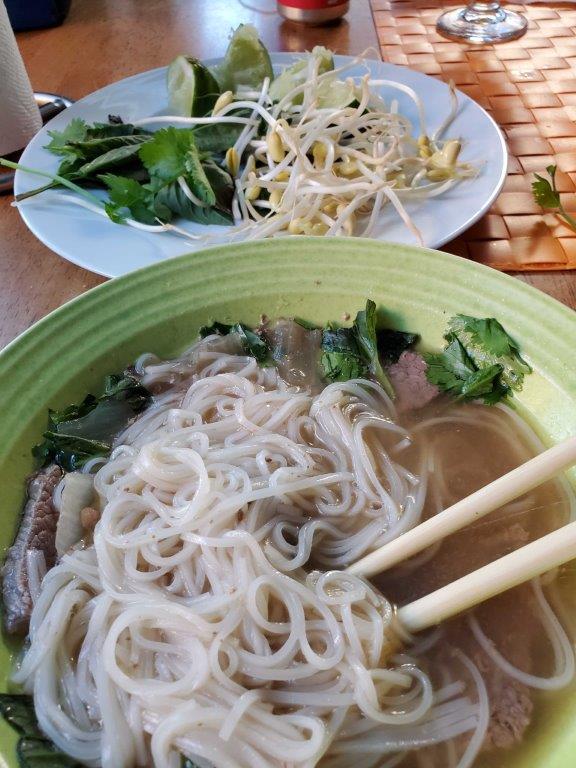 Finland is great.  You should go, and in the meantime, you should try some of these recipes.  Next up, a country with no discernable food history whatsoever. Frank? Francis?  Something like that.  That should be easy, right?