Back when we did Equatorial Guinea, we pointed out why there are so many “Guinea” countries, and the answer is essentially: because imperialism. We’re now on to the second of the four, the tiny west African country of Guinea. This one was formerly French Guinea, so we’ve got some French influences here.

We decided to make a drink, a desert, and a main dish, so lets start with the drink.  There’s really not much to photograph – it’s a TON of grated ginger, which you soak in boiling water with cloves, cinnamon, and sugar.  Then you strain it and mix in some orange and lime juice.  Here it is in a pitcher: 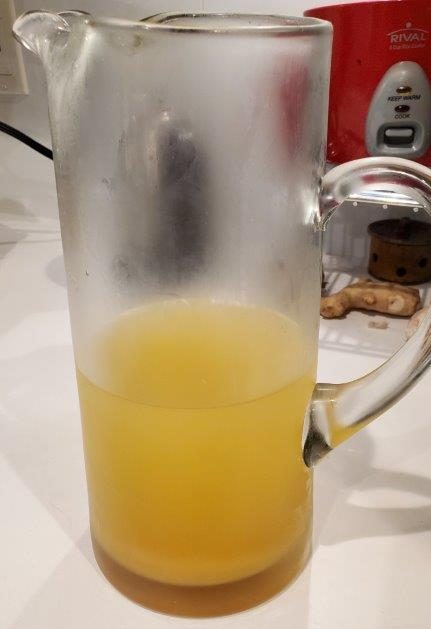 However, what it lacks in photogenicness. Photogenesis? Photogenicism? it makes up for in being SUPER DUPER TASTY.  Ginger, cinnamon, and sugar – what’s not to…

hey… is this a pumpkin spice orange juice?

Next up was the main dish.  We’re making Konkoé Turé Gbéli, or smoked catfish in sauce.  Obviously, our first ingredient needed to be smoked catfish, so I picked up a whole bag of these bad boys from the local African grocer. 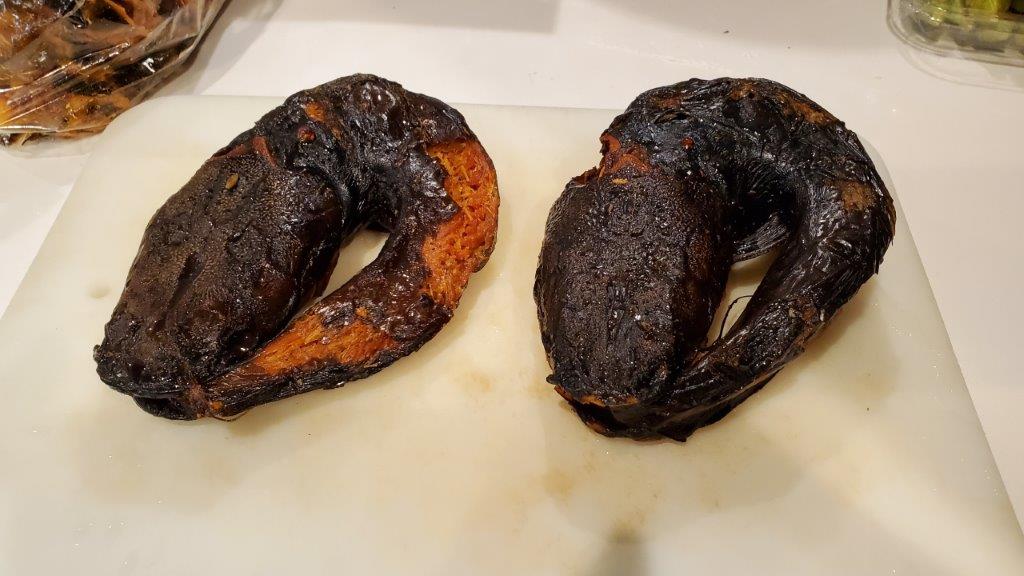 They were very, very intense smelling when we opened the bag.  They are also not in any way deboned – as far as we can tell, you’re just supposed to crunch right through them.

You toss the fish into a big pot of boiling water to start softening up, and then make a sauce by blending garlic, onions, scallions, tomatoes, and a hot pepper of some sort.  We used half a Scotch bonnet, on the theory that that was vaguely authentic to the region. This all gets pureed, then added to the cooking pot: 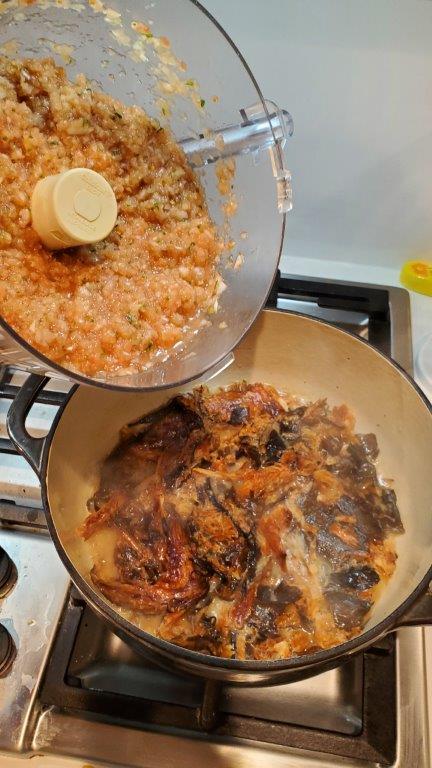 Next up, veg!  This recipe called for a mix of okra, eggplant, carrot, and potatoes.  Into the pot with them as well! 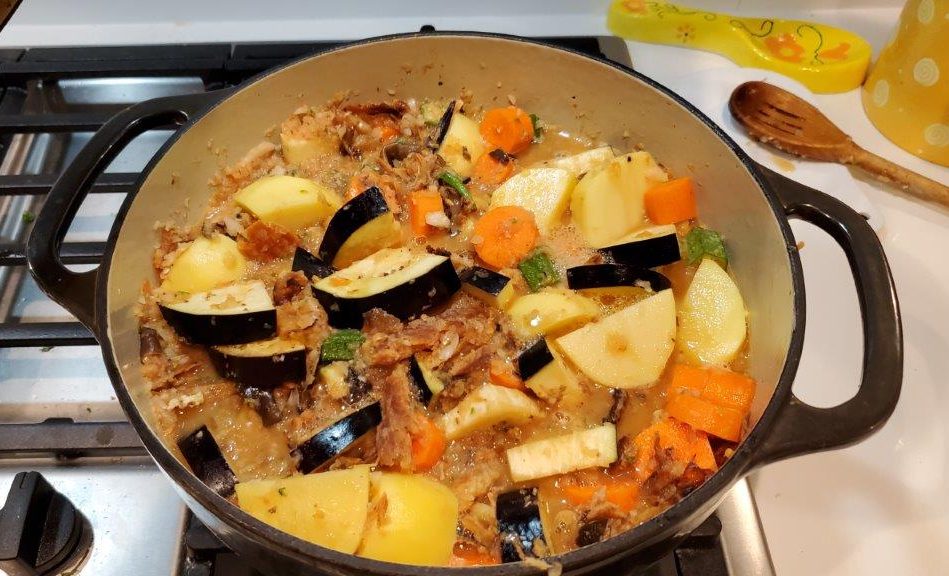 After cooking for a while until the potatoes are done, the dish is finished with a bit of red palm oil. 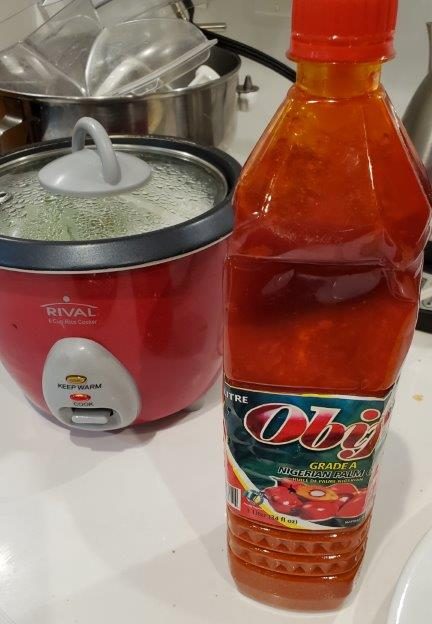 Also shown – rice cooker making okra rice.  We did this wrong, as it turns out – the recipe called for cooking the okra separately and mixing it in at the end, but we just tossed the okra in with the rice while it was cooking.  It didn’t seem to cause any problems.

Back to the subject of the palm oil, however – this is a ubiquitous ingredient in west Africa, but we’ve had a very mixed relationship with it.  The recipe called for a “glass” of the stuff, and having no idea how much that represented, we put in maybe a tablespoon or two.

And here’s the final stew!

So how was it?

It was not really to our taste.  Now I want to be clear – any time we make a dish that we aren’t terribly fond of on this project, we are adamant that there’s two possible explanations – we didn’t do it right, or our palates just aren’t attuned to this flavor palette. We will NEVER say – “This is a bad recipe.”  We WILL say “We probably didn’t do this right,” and “This is just not something we are accustomed to.”

In this case, I think it was a bit of both.  On the flawed execution side, the potatoes were definitely undercooked – we probably cut them a bit too big.  On the personal preference side – the catfish was really, really smoky.  Combined with the intense flavor of the red palm oil, you have a very dark, somewhat oily personality to the dish, which was further pushed in that direction by the eggplant.  I can understand how this dish could be a real treat if your preference is for those kind of flavors – it is definitely not an understated meal.

Speaking of flawed execution… For dessert, we decided to follow the French influence and make a mango and banana tarte tartin.  That’s a dessert cooked upside down – you make a layer of caramel, layer in fruits, top with a short crust pastry, bake until done, and then flip over.

Those last two words hide a multitude of ways to go wrong.

Here’s the hot caramel in the pie dish: 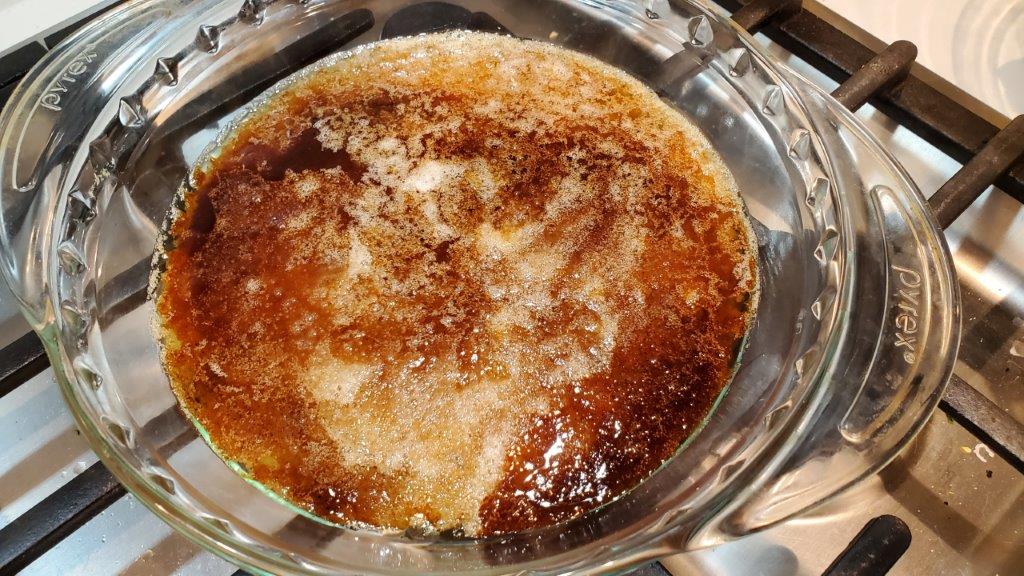 Fruit on top: (there’s banana under the mango) 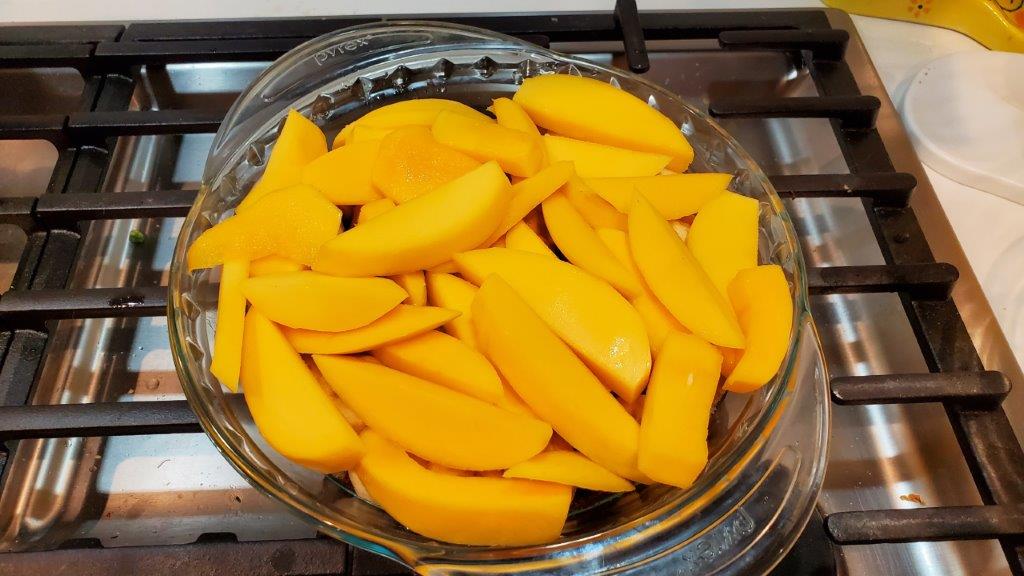 Add the pie crust and bake until it is nice and bubbly around the edges: 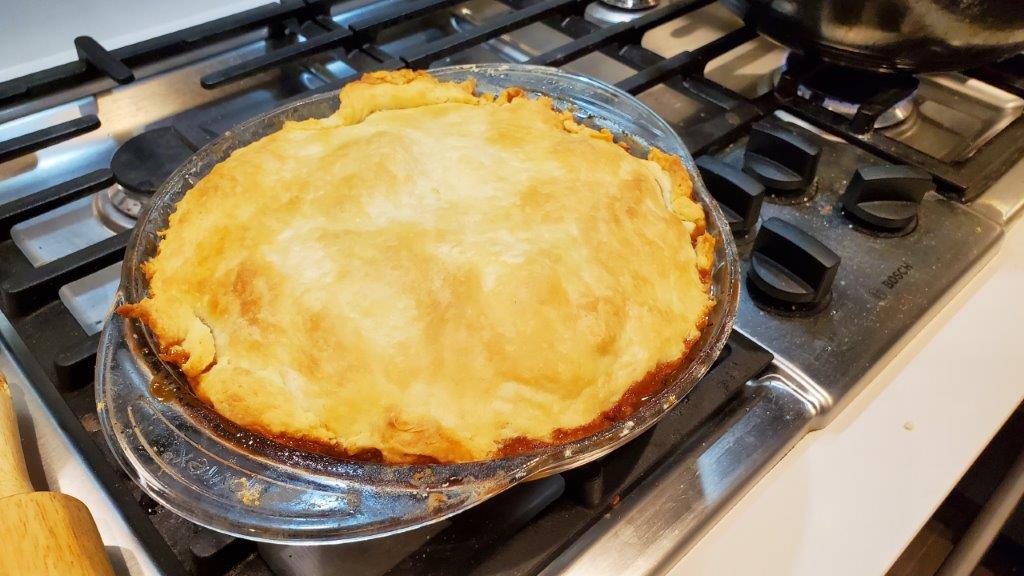 At this point, you theoretically just wait for it to cool a bit, and then flip the whole pile over, as the caramel solidifies into a nice gooey tart.

Yeah, about that.  Our caramel never set.  The recipe was a bit short on detail, and didn’t say exactly when to add the butter to the caramel.  Turns out, you DON’T do that at the beginning, or you just get toasted buttery sugar syrup, not caramel.  It was still TASTY, of course, but we had to just leave it in the pan and scoop slices out with a spoon. 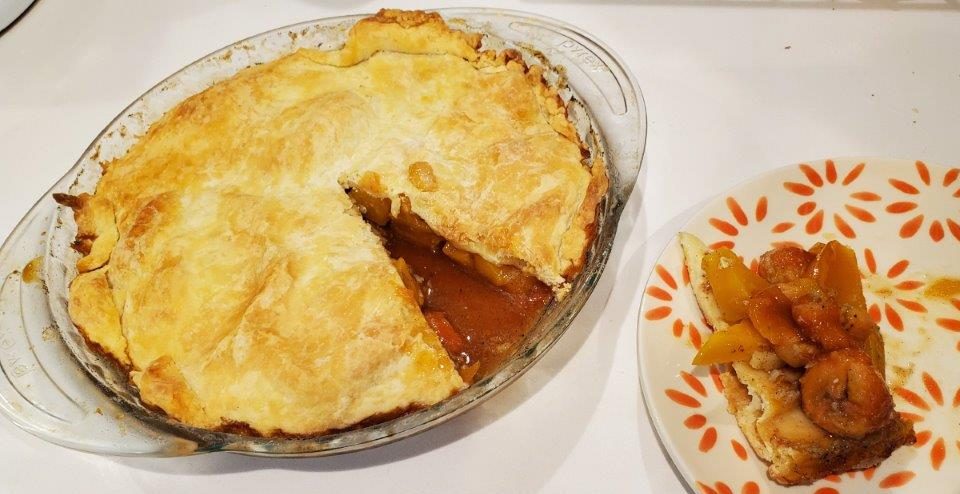 The crust was tasty, and you definitely don’t get a soggy bottom if it just stays on top.  And really – tropical fruit soaked in sugar syrup isn’t NOT going to be delicious.

So that’s Guinea.  We’re sorry we didn’t find the main dish more appealing, but we polished off the tarte and the drink, and next time we’re staying right next door for the Portuguese colonized Guinea-Bisseau.