“The pig tails are in the bucket on the trolley.”

I have to be honest, that is NOT the response we were expecting.  “Sorry, we don’t have that,” was probably at the top of the list, followed by, “Oh, they’re in the freezer.”

What we were NOT expecting was to be informed that the, you know, MEAT, was in a ten gallon bucket of room-temperature liquid in an extremely rusty old shopping cart at the back of the store.  But there it was.

To be fair, said meat was salted within an inch of its little piggy life, so there was probably not any more to worry about than a ham sitting on a stand at a deli.  Let’s hope, anyway.

We were at the Caribbean market (store name: “Caribbean Market”) to purchase ingredients to make the national dish of Grenada, a country most Americans know (if they know it at all) as the target of an invasion by Ronald Reagan in 1983.  Grenada now has their version of the Thanksgiving holiday on October 25th to celebrate that occasion.  Coincidentally enough, we were planning to make our Grenadian meal a few weeks early on CANADIAN Thanksgiving, despite the fact that Canada publicly condemned the invasion.

In addition to the pigtails, pictured later, we also bought a breadfruit and some other veg: 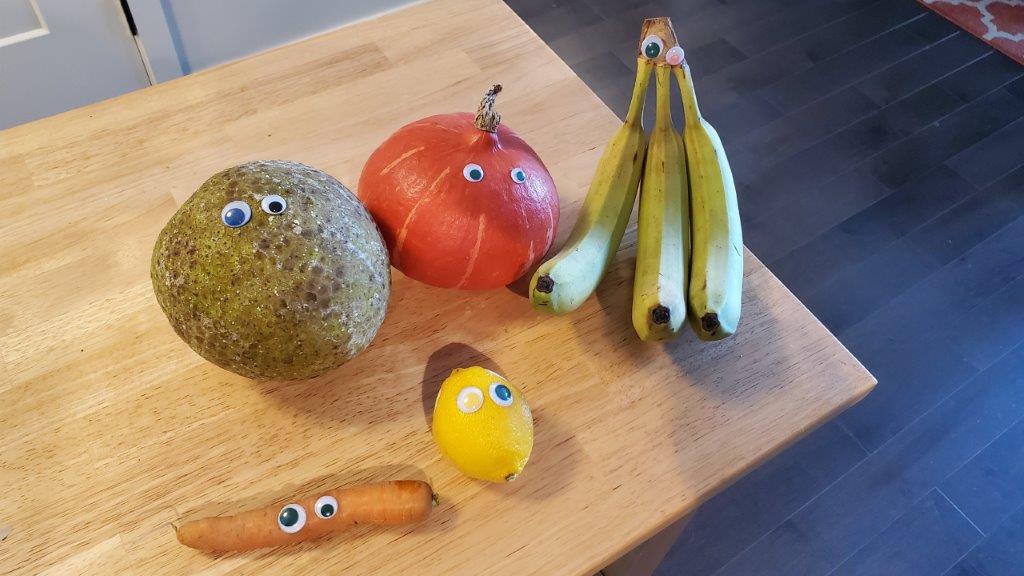 The breadfruit is the one on the upper left.  Carrot, lemon, and banana (BANANA!) are hopefully obvious.  The small pumpkin-looking object is actually a Kuri squash, standing in for actual pumpkin because a full sized pumpkin produces WAY more pumpkin than we were prepared to commit to.

Many recipes we’ve made from both Africa and the Caribbean thus far have called for amaranth or calalou, a leaf which is similar to, but not quite the same as, spinach.  At the Caribbean Market, we finally found some! Canned, but authentic nonetheless. We also got bottle of a green seasoning called (checks notes) Green Seasoning. 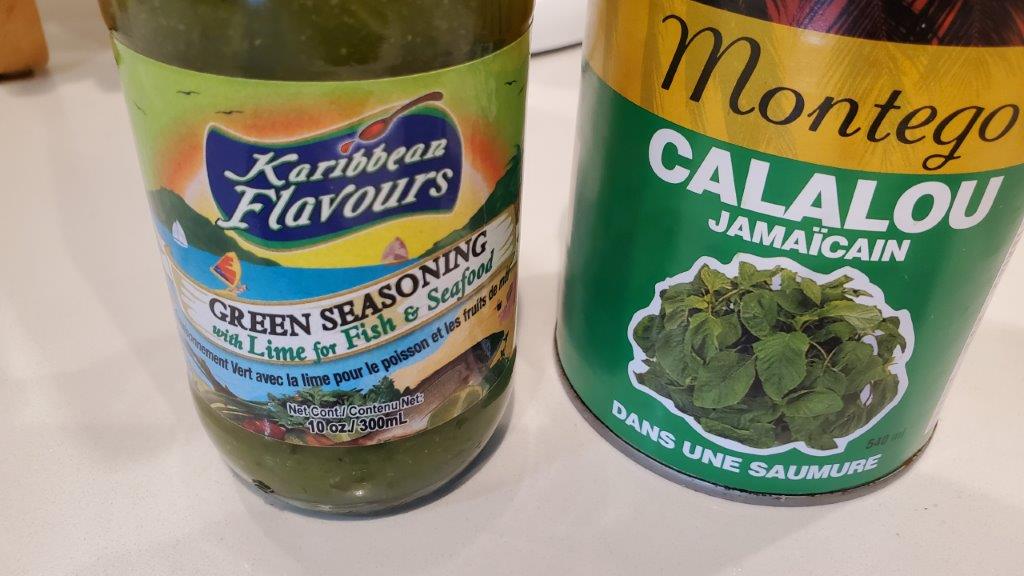 OK, so, fully stocked now, what are we making?  A stew! Because we’re stocked up!

Stocked up! Get it?

The national dish of Grenada is something called an “Oil Down”.  I got distracted doing the research for this by just how much of the Wikipedia article for the dish was unsourced copyright violations and went on a bit of a deletion spree there.  That’s an important part of cooking, right?

The gist is that “Oil Down” is a stew that can contain a wide variety of ingredients, but the items which are generally common to most iterations are: some kind of salted meat or fish, breadfruit, and coconut milk seasoned with “saffron.”  The scare quotes are there to point out that what Grenadians refer to as saffron, the rest of the world calls turmeric.

Past those basics, you can put almost anything in an oil down.  Oil Down can also refer to the neighborhood party where the stew is assembled, simmered and consumed.  It appears to be a dish where the history of the gender roles is similar to that in the US around barbeque – women have historically primarily been expected to do the cooking, but for a weekend Oil Down, the men take over the pot.  Sigh.

At any rate, lets get cooking.  First, we boil the living daylights out of the pigtails to make them marginally  less scary, and also to try to extract some of the salt. 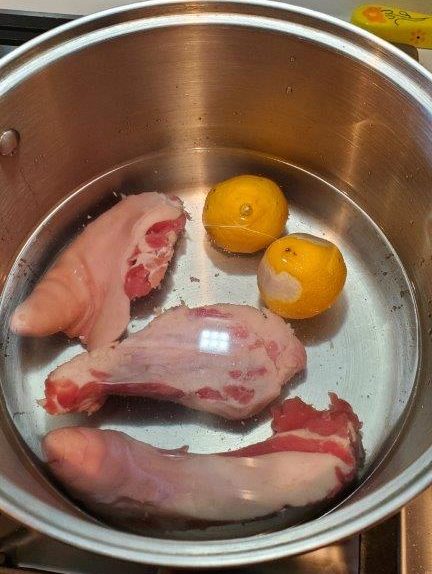 While that’s going, we marinate chicken thighs in the green “Green Seasoning” seasoning. 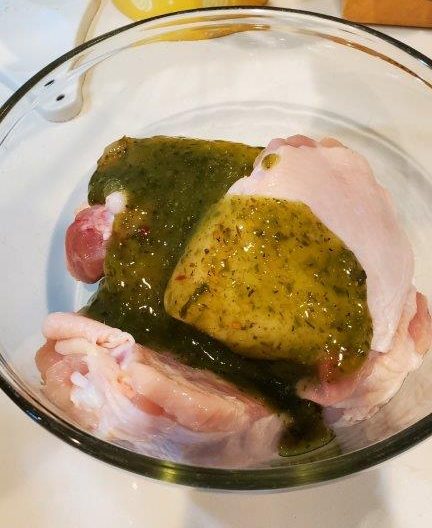 We also chop up a LOT of veg.  Most of them are pretty straightforward, but here’s what a breadfruit looks like on the inside: 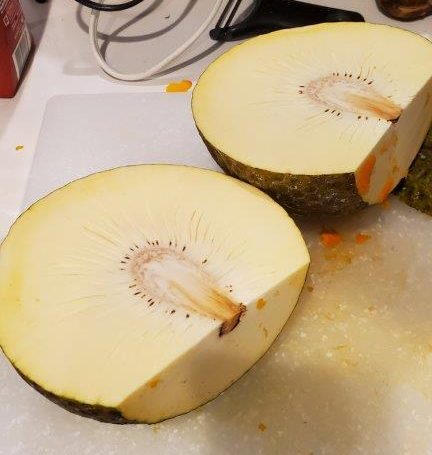 You carve out the middle bit and throw it away, then peel the skin and discard that, which still leaves you with a LOT of breadfruit.  It’s got a pleasantly citrus-y smell, and  tastes like a very, very slightly acidic sweet potato.

With all the mise en placed, the actual assembly is just a question of layering. And with that, we give you the first animated .gif in the history of this blog:

In order, those layers are:

The entire pot is then filled with turmeric laced coconut milk, and left to simmer for a very long time, interrupted by the addition of the simple flour-and-water dumplings part way through.

The reason the dish is called “Oil Down” in the first place is that by the end of the cooking, most of the coconut milk and oil has been absorbed into the rest of the ingredients, resulting in a rich, tasty stew dyed yellow by the turmeric. 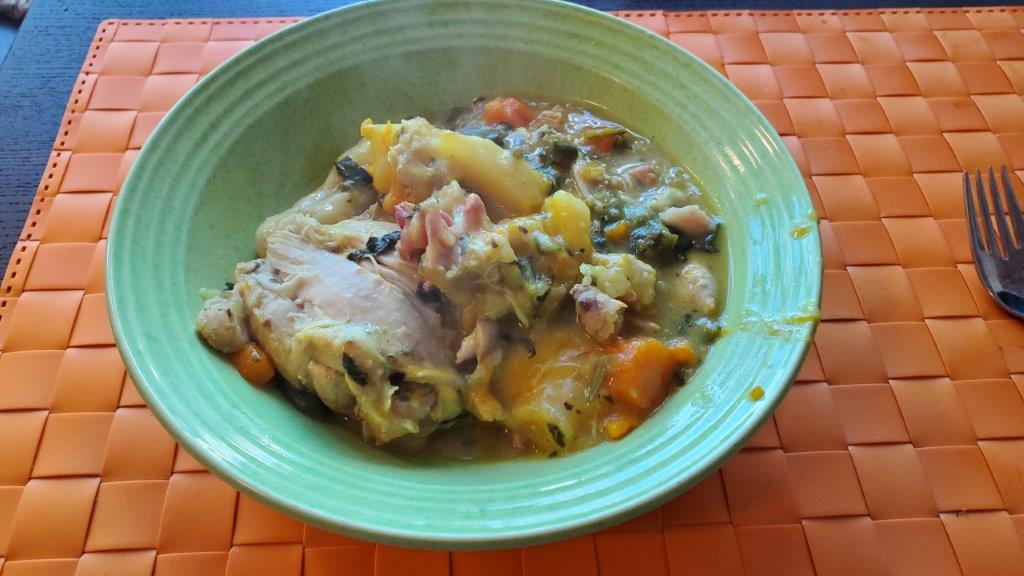 The verdict was that this was pretty darn good!  All the flavors had blended together to produce something with the smoothness of the coconut milk, the salt and umami from the pigtails, and the diversity of textures from the various vegetables. Interestingly, there was basically no trace of the pumpkin left – it had more or less completely dissolved. We salute its sacrifice to the hearty texture of the broth!

It was a great meal to celebrate Canadian Thanksgiving.  Don’t ask us why.  At least we’re not celebrating Reagan sending in the Marine Corps.

Next time, we stay in the western hemisphere for Guatemala!