In the before times, we were making one meal every few months – this was a very occasional project.  Since the apocalypse, we’ve been averaging in the neighborhood of one a week.  So the fact that it’s been over a month since our last meal feels a bit weird.

But we were busy moving to a new apartment, so that took a bit of effort.  And it was worth it for a TON of reasons.  You’ll see our new view at the end of this entry, but let’s just start with the kitchen – it’s smaller, but it has a GAS RANGE!  HUZZAH!  Finally when the directions say “lower the heat” under a pot, that’s, you know… possible.

So what’s cooking? Well, we’re up to the Republic of Georgia, which, despite the poor flag-acquisition skills of at least one of the January 6th treasonous morons, is NOT, in fact, in the American South.  Rather, it’s a country with a long and storied history.  It has a unique alphabet, and has been oppressed by some of the most interesting people in history, including Genghis Khan and Josef Stalin.  (This despite, or rather BECAUSE OF, the fact that Stalin was himself from Georgia.)

Let’s go shopping!  I returned to the grocery store where we got the Estonian bread, and found absolutely everything I was looking for.  I also managed to locate a Georgian wine at the local BC Liquor store. 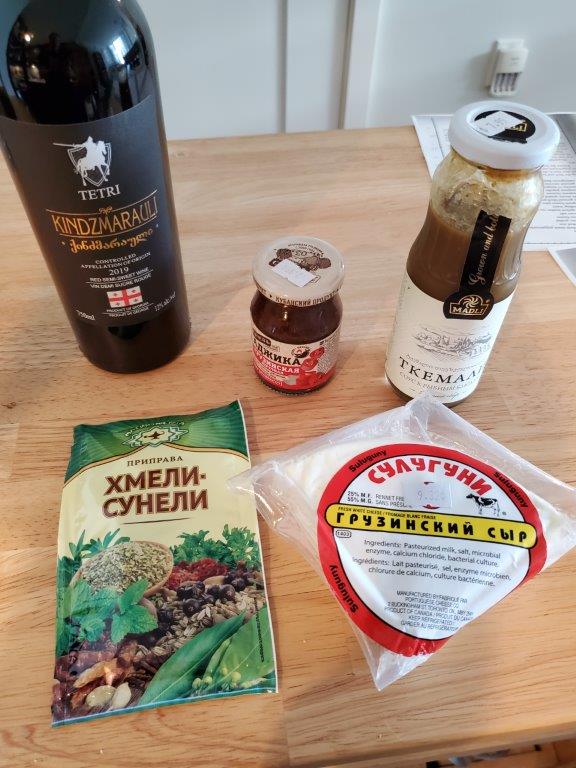 You may notice Cyrillic lettering on most of these products, even the cheese, which is entertaining, because it was made in Ontario. However, if you look closely, you can also
see Georgian script on the wine.

The definitive English language reference on Georgian food is a book called The Georgian Feast, by Darra Goldstein.  Yet another awesome thing about our new place is that it is a fifteen minute walk from the Vancouver Public Library Central Branch, which has a LOT of cookbooks, including that one.  So all the recipes from this meal are from that there.

The most famous dish from Georgia is probably Khachapuri, which is a cheese stuffed bread.  There’s a million different variants, including one where you stir a raw egg yolk into the hot bread, but we made a fairly basic version. The most common cheese to use for khachapuri is sulguni, pictured above.  Having learned our lesson during the Brazilian meal, we did NOT attempt to grate the entire block by hand. 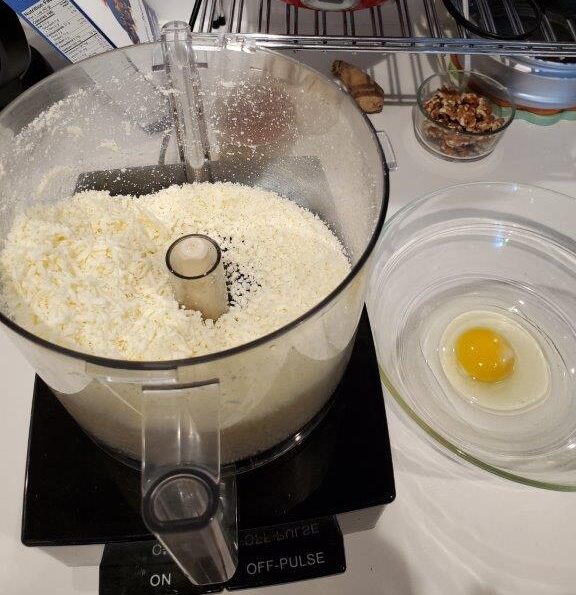 The entire composition of the filling is visible here – cheese and an egg.

The bread itself was a bit more work.  It’s a standard short dough, where you cut cold butter into flour and then let it rest before adding the remainder of the wet ingredients. 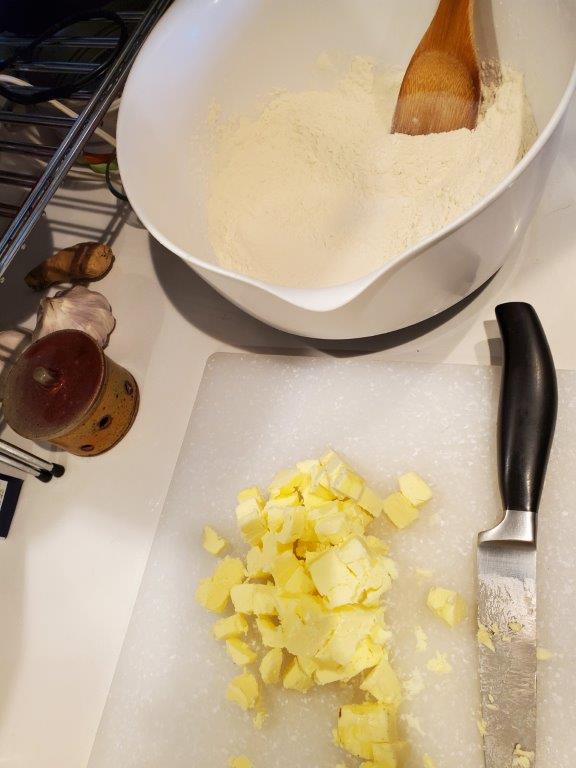 Other than that, the recipe couldn’t be simpler – roll out the dough, spread cheese on dough, dissuade cat from helping, fold dough over, egg wash, bake. 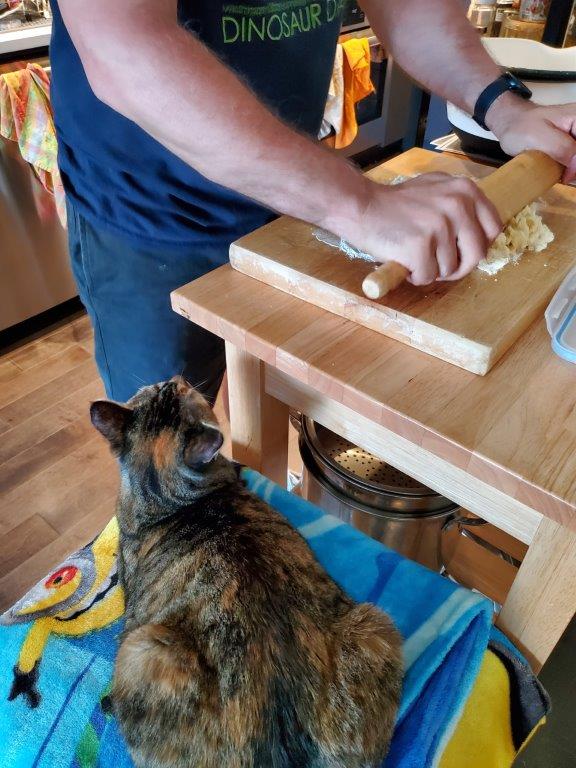 I’m somewhat unsure if we did this right.  There seemed to be more filling than was warranted for the amount of dough. 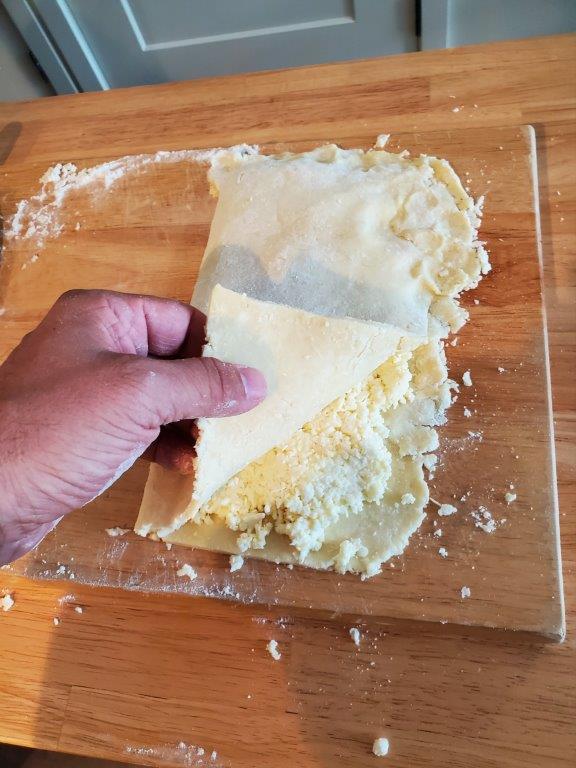 Fortunately, we had failed to adjust for having less cheese than the recipe called for, so we were able to take the remaining cheese and stuff it into the extra dough, which made for a small emergency backup cheese bread, to be activated in case of failure of primary cheese bread. 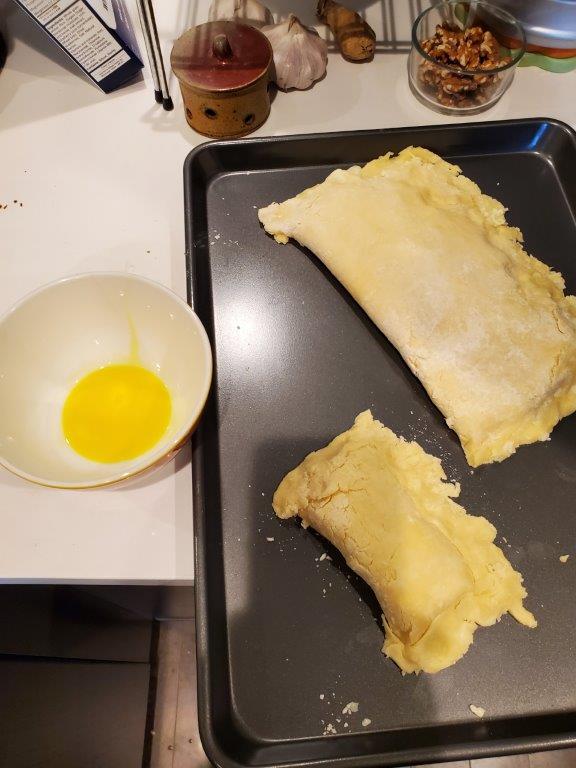 For our main dish, we decided to make Kharcho, a sour beef stew.  The first thing you do is just boil some stew beef with soup bones, bay leaves, parsley, and pepper for a very long time. After 90 minutes or so, you fish out the meat, put the broth back on the boil, and toss in some rice. 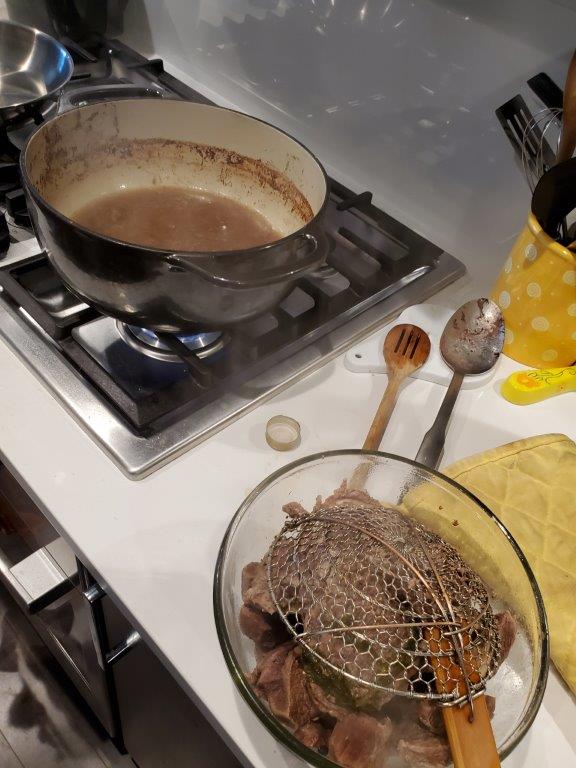 Did I mention we have a gas range now?  Isn’t it purty?

While the rice is cooking, you sauté a LOT of onions in a LOT of butter. 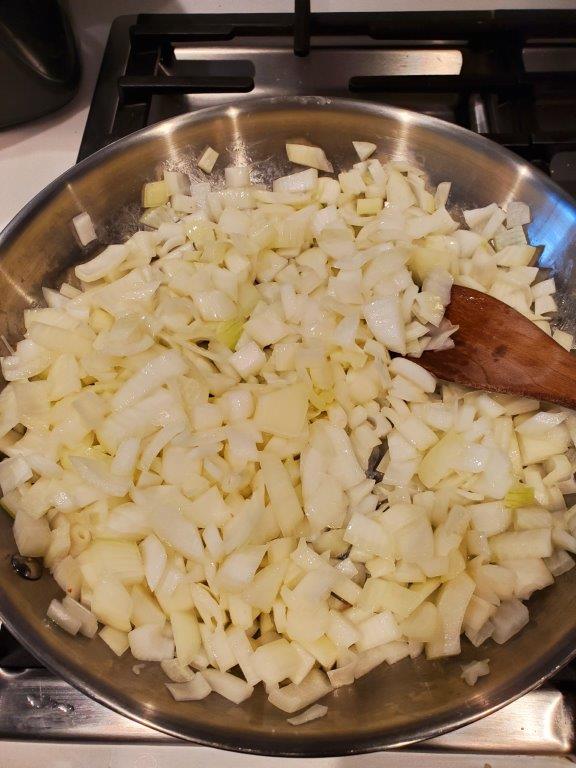 In this picture, you can see the celebratory new skillet we bought to celebrate the new apartment.  We also got some celebratory cast iron, which will almost certainly be making an appearance in a future meal.

Back in THIS meal, we toss the onions into the broth and add our seasonings, which include garlic, paprika, red pepper, khmeli-suneli, and sour plum jam. 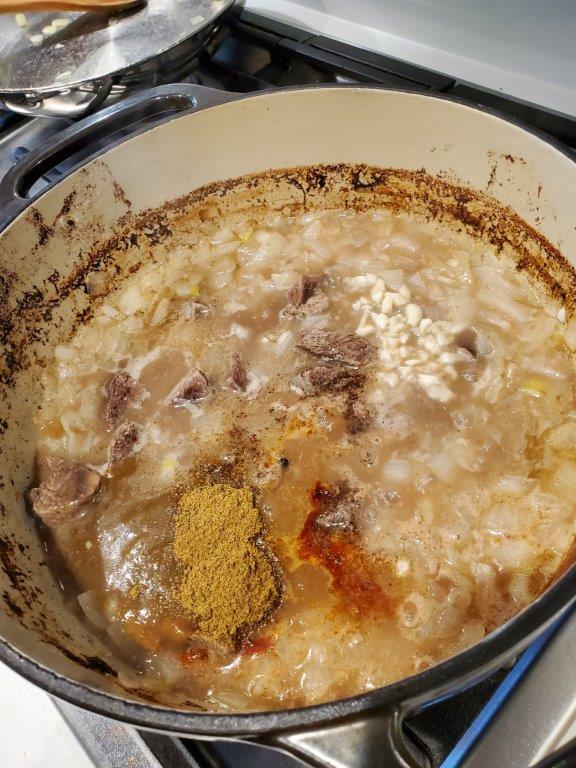 Let’s talk about those last two.  Khmeli-suneli is a traditional dry spice blend.  The most common ingredients are fenugreek, bay leaves, ground coriander, savory, and dill. Also common, although not easy to find by itself in North America, is marigold seed.  Fortunately, we had the premixed packet shown above.

The souring agent in Georgian soups is normally Tklapi, which is… wait for it… a fruit roll-up.  OK, it’s dried fruit leather, but it’s still funnier to say it that way.  To prepare it for use in the stew, you chop it up, dissolve it in boiling water, and puree it.  Basically, you make a jam.

We didn’t have any Tklapi, but we did have authentic Georgian sour plum jam, so we decided it was fine to just skip a step.  Once everything’s mixed and cooked, you toss in some fresh dill, cilantro, and parsley, and the stew is ready to go! 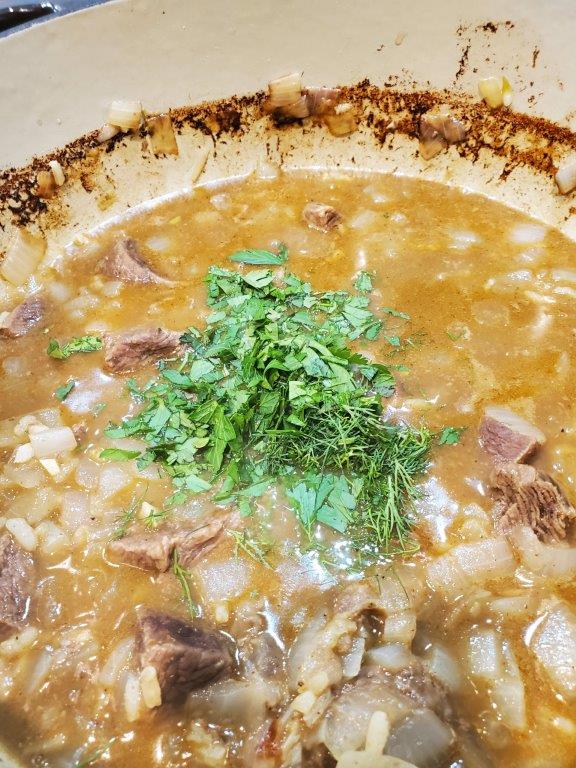 Before we get to the glamour shot, lets talk about dessert!  According to the book, desserts aren’t a huge part of Georgian culture, since the meals tend to be enormous on their own, but they do exist, and we decided to make a tea cake.

This tea cake is not, however, “a small flat cake usually made with raisins,” as defined by our friends at Miriam Webster. (At least, we’d like them to be our friends.  They never return our calls.) Rather, it’s a cake MADE with tea.  You start by hideously oversteeping a cup of REALLY strong tea.  Then you cook some sugar until it starts to color, and dissolve it in the tea. 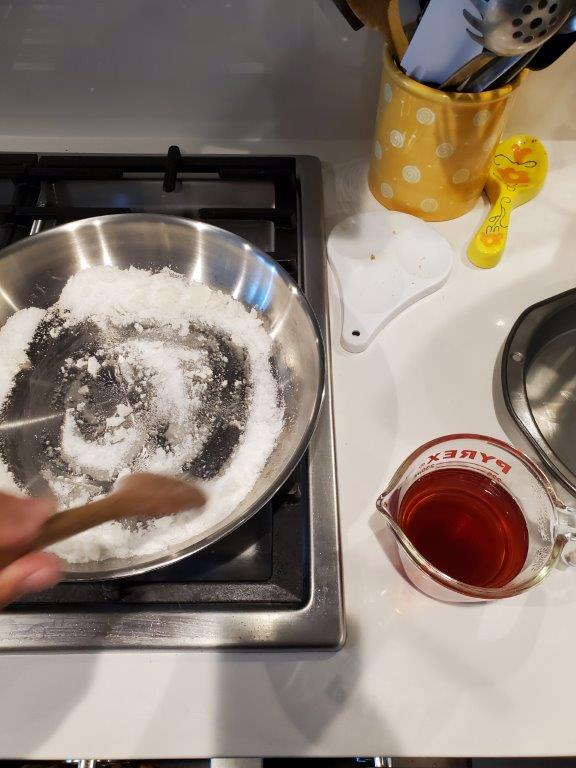 Predictably, when you pour the not terribly warm tea on the melty sugar it did the horrible crystallization thing that makes people on the Great British Bake Off openly weep.  However, since we weren’t TRYING to make a caramel, that was fine.  You can’t uncrystallize the sugar, but you CAN dissolve it.

The rest of the cake is a tour of baking’s greatest hits.

Cream butter, sugar, and egg yolks, then add baking soda to some red wine vinegar to make a volcano. 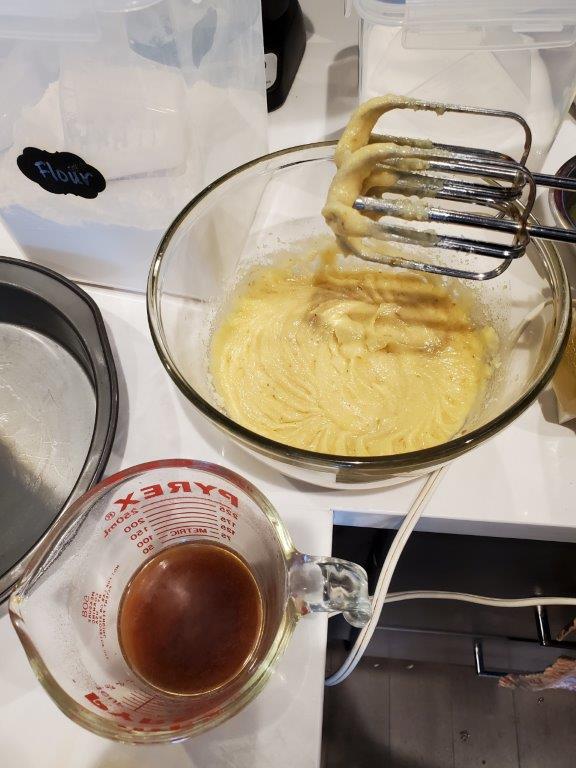 Add some more plum jam to the mixture, and then, since there’s a bowl we haven’t had to wash yet, beat some egg whites to get even more leavening. 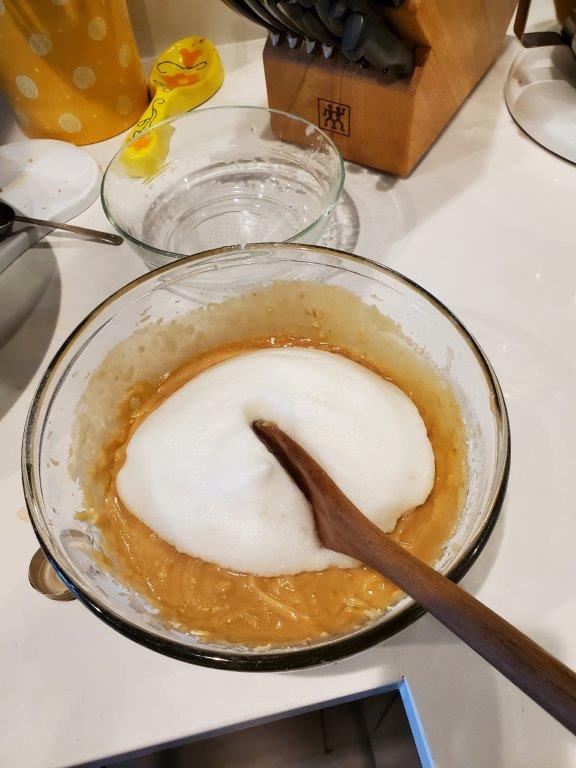 Those get gently folded in, and the whole cake bakes for the better part of an hour.  When it’s done you spread a thick layer of jam on top, and top it with toasted, crushed walnuts.  (This is apparently an unusual Georgian meal in that this was the ONLY dish with walnuts in it – according to the cookbook, they’re quite ubiquitous.) I should also point out that this jam is REALLY tart – you wouldn’t necessarily want to just spread it on toast.  Or maybe you would, but it works well here balanced by the sugar in the cake. 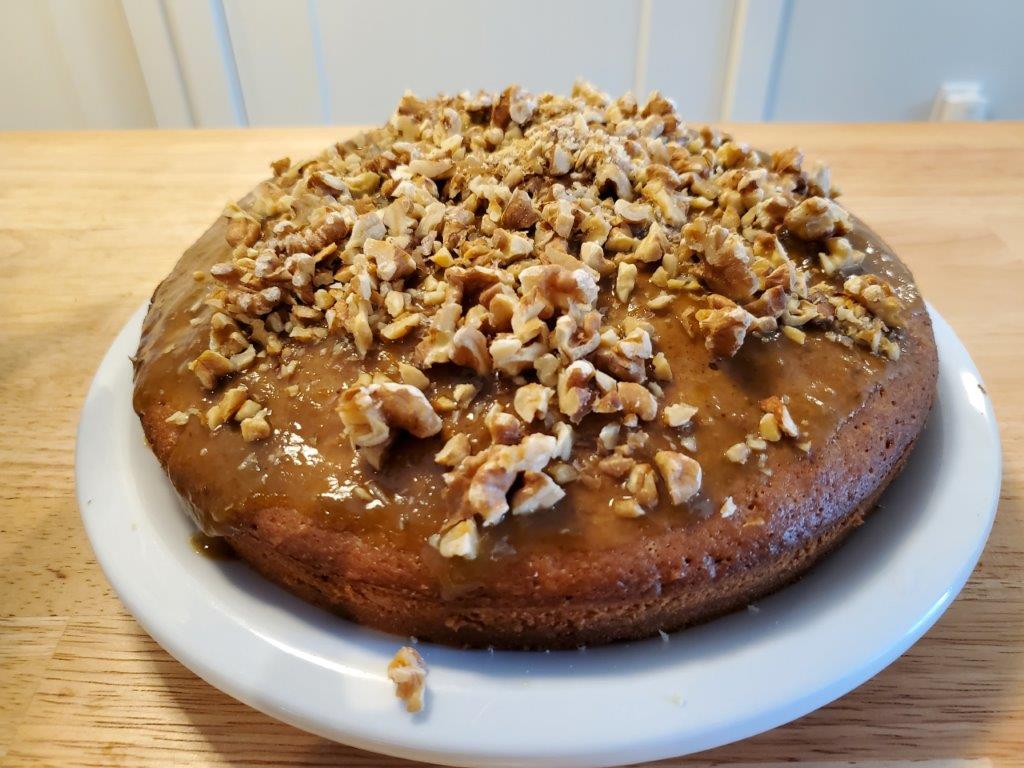 So let’s see the whole thing!  Also, the truly TERRIBLE view from our new apartment. 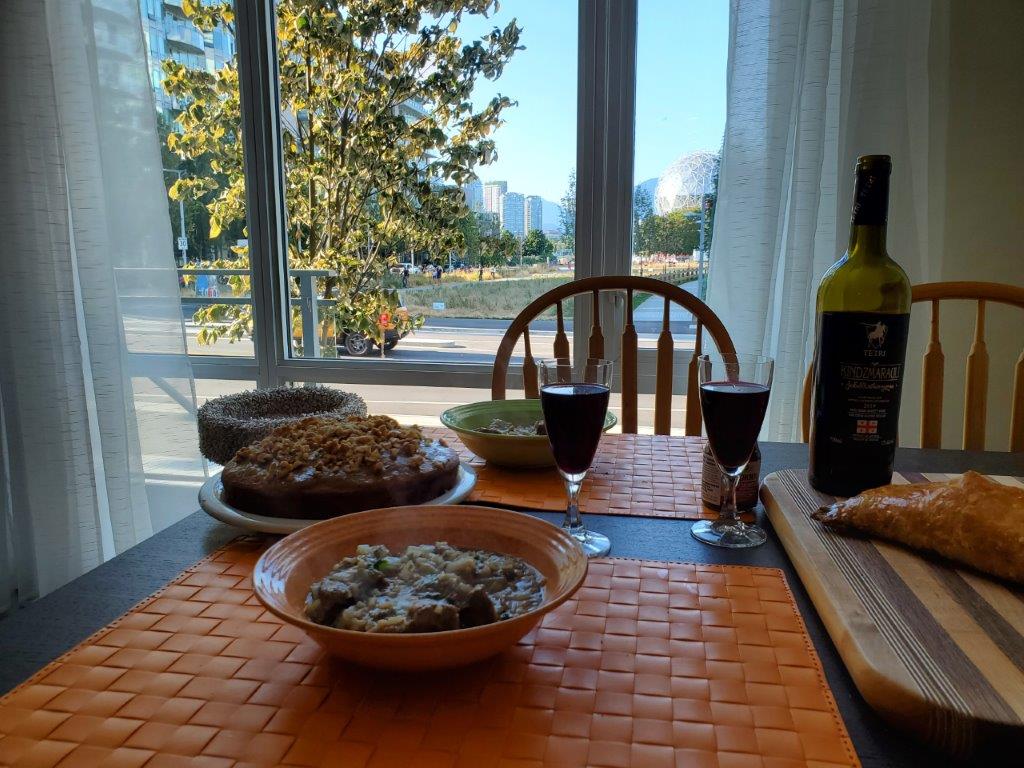 Honestly, this isn’t the best shot of the FOOD, because I was trying to get the mountains and the Science World.  But we spend most of our time staring out the window while we’re eating anyway – the view really is amazing.

And so was the food!  The soup was tangy and rich, with lots of interesting spices, but what put the final triumphant touch was mixing in the red pepper paste.  That took it from delicious to transcendently good.  The cheese bread may have been ugly (there’s a reason there’s no OTHER pictures of it) but it was cheese. In bread.  What’s not to like?  And the tea cake is a recipe I will DEFINITELY be hanging onto. The wine was VERY sweet, and I’m not sure I’d drink it all the time, but it was good with the hearty soup.

Next up, the esoteric, unfamiliar cuisine from the exotic, fabled land of… Germany.

Recipes: (Even though we got all of these from a cookbook, they are unsurprisingly available on the web.)