And we’re going to be here for a bit – in addition to Gabon, we have The Gambia (which may be what inspired THE Ohio State), Ghana, Guinea, and Guinea Bissau.  These are all pretty small countries, and a lot of the borders are artifacts of colonialism rather than reflective of any sort of cultural or (certainly) culinary boundaries.

There’s not much online specifically about Gabonese food.  The consensus seems to be that the French colonial influence is still a bit more pronounced in Libreville than it was in Kinshasa or Brazzaville.  As such, one of the dishes that gets mentioned a lot is Mustard Chicken.  (If it has a specific local name, other than something like “Poulet à la Moutarde”, I haven’t found it.)

Everyone seems to be working off the same basic recipe, which I can trace back to a first posting on Celtnet.org.uk, a site that no longer even exists.  So while there are easily half a dozen posts on “Gabonese Mustard Chicken,” if that original poster to Celtnet was full of nonsense, then so is everyone else.

Fortunately, the recipe is pretty basic, so there’s not a lot of weird places for inauthentic embellishments.  No fermented black bean paste or herring here. 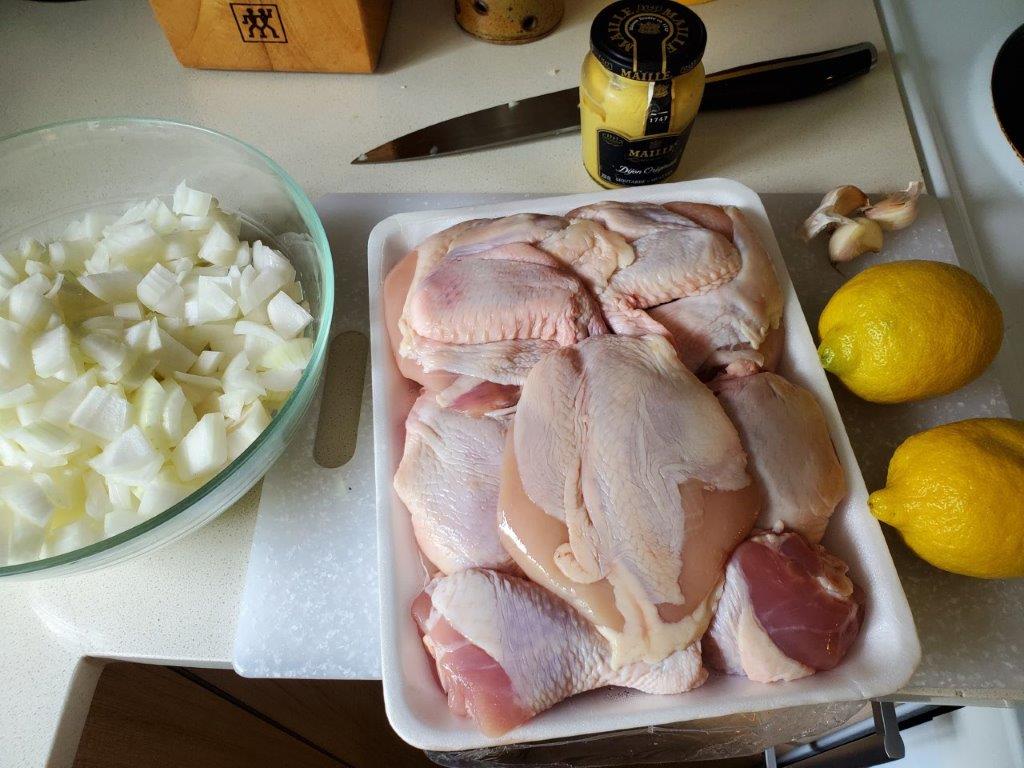 In fact, the ingredients list is SUPER short – garlic, onions (SO MANY onions), lemon juice, mustard, and a chicken.  We got smart this time and bought the chicken already cut into pieces.

And by “mustard”, I mean the ENTIRE JAR of mustard.

A quick sear in oil, and then you just put everything in a pot to steam for an hour. 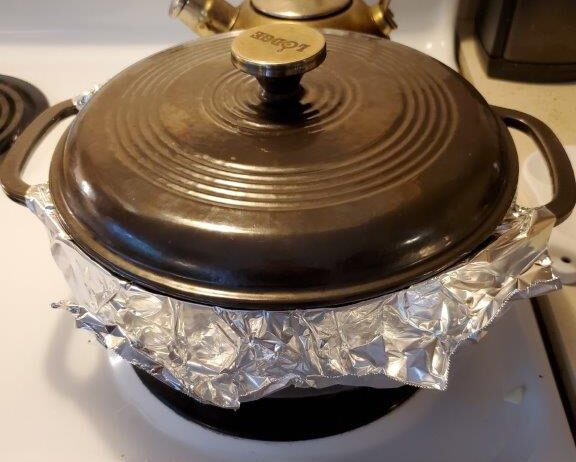 Foil added to trap steam.  When it’s done, you serve it over rice: 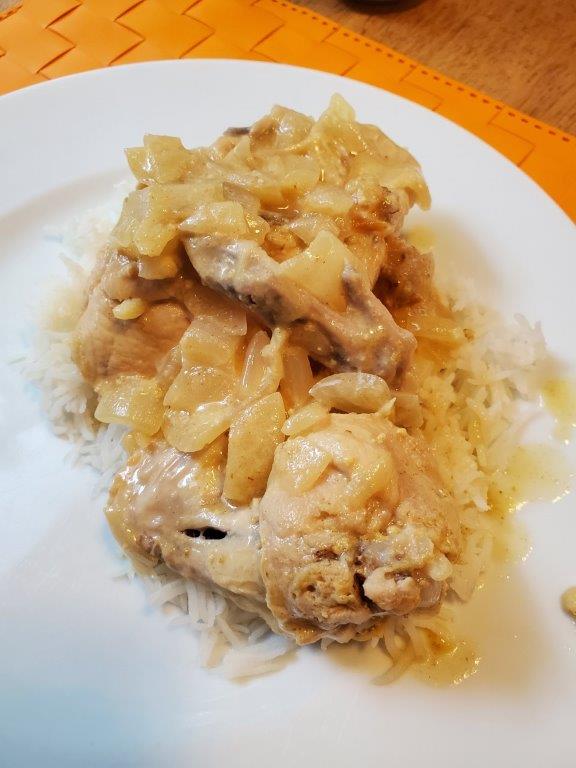 I apologize for the slightly vertiginous camera angle here.

And – that’s it.  This is one of those meals where the intro takes a LOT more words than the cooking, because it’s so simple.

That said – this was pretty darn tasty.  The chicken was nice and juicy from the steaming, and the best part was the onions that had soaked up all the mustard.  Especially when you got a little of everything on your fork, this was a great tasting stew, and would be an excellent choice for a weeknight meal where you wanted to have some leftovers.

We also made dessert.  The one thing everyone brings up on recipe blogs is how much they liked Gabonese baked bananas.  And it is ALWAYS bananas, even though I’m pretty sure you’d be MUCH more likely to run into plantains in Gabon.  I’m guessing there’s once again a single Platonic ur-recipe floating around out there somewhere that didn’t make the distinction.

But given that we LIKE bananas a lot more than plantains, we didn’t really try that hard to disprove the choice of ingredient. 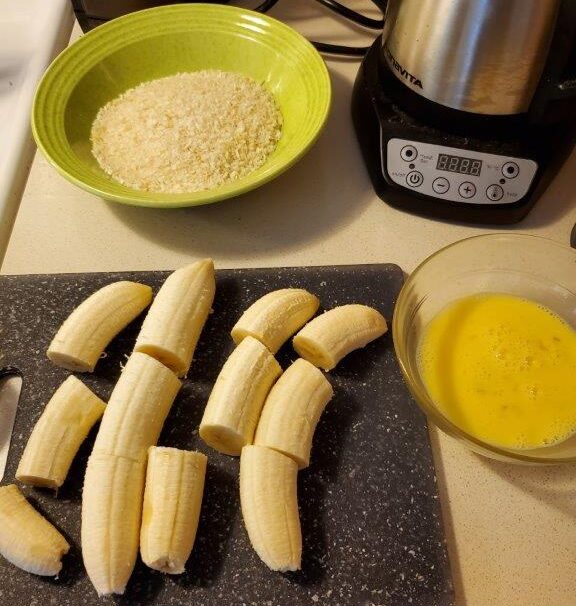 “Baked bananas” is a bit of a half truth, to be honest – they ARE baked, sure, but only after being battered and fried.  The batter is bread crumbs (panko, once again, since we need to use these things up) held on with a mix of egg and orange juice. 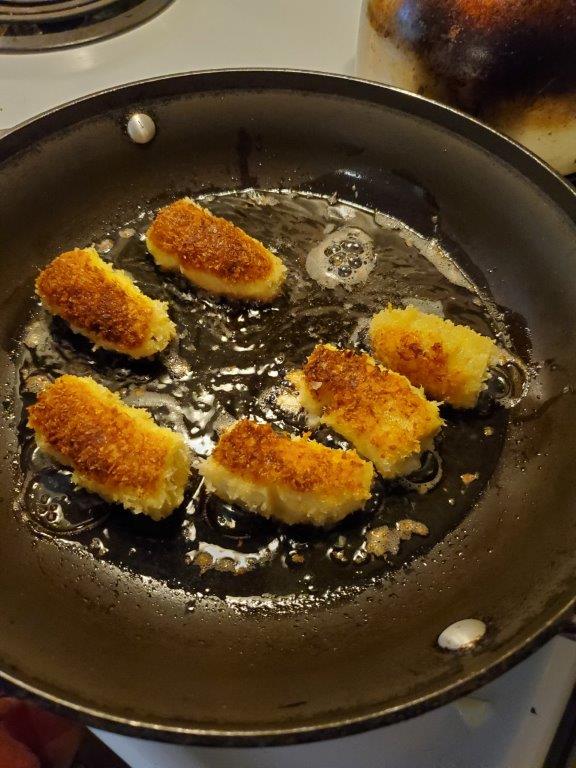 They’re fried until crispy and golden, then you put them in the oven for five minutes to… cook?…warm?… mildly annoy?… the insides.  I’m just not sure what five minutes in the oven realistically accomplished.  But who cares – these puppies were delicious! 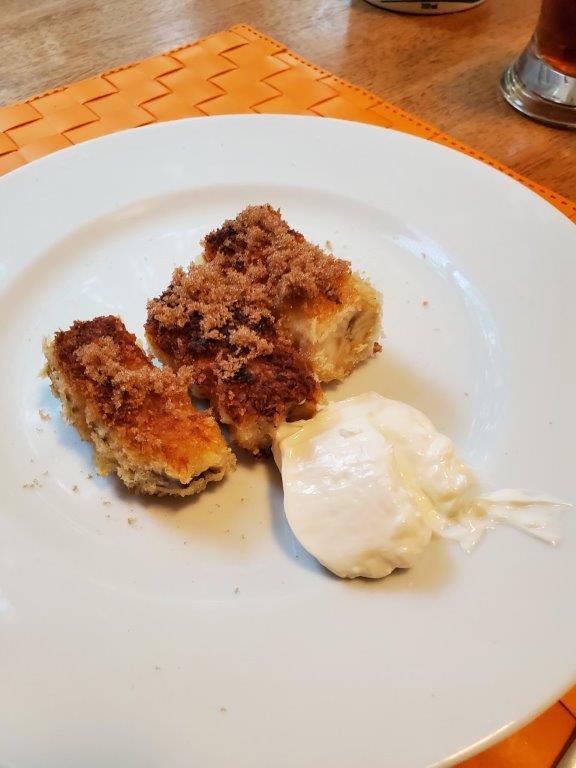 Topped with brown sugar and sour cream, they were a great mix of sweet, crunchy, and just a bit tart. I would definitely serve these to friends.

And that’s it for Gabon – no three day preparation, and little to no certainty about authenticity, but tasty food nonetheless.

Next up, THE Gambia!

Postscript: While trying to find the original URLs I used for these recipes, I think I found the origin point – a cookbook by Dyfed Lloyd Evans called “The Recipes of Africa.” BUT – it turns out Evans is the guy that ran the Celtnet website, so it’s once again back to that same source of unknown accuracy.