We had been looking FORWARD to this one.

Leigh and I have VERY diverse food tastes, but the nature of this project is that more often than not, we’re researching recipes from countries whose food we have not specifically tried before.  Sure, we’ve had pupusas, but when was the last time you saw a specifically Belizian restaurant?

Ethiopia, on the other hand, we were familiar with.  There’s a fantastic Ethiopian place in Lansing called “Altu’s.”  If you find yourself in Lansing, we’re really, really sorry.  But at least you can go and STUFF yourself on Ethiopian food.

The absolutely essential component of an Ethiopian meal is a spongy flatbread called injera.  It’s slightly sour, and is used to scoop up the thick stews that are the cornerstones of the cuisine.  An Ethiopian meal will typically not be served with cutlery – just tear off some bread and scoop up the stew.  Then try to STOP eating before you make yourself ill.

Good luck with that.

So we had to try to make injera.  Problem: We have tried before, and it Did Not Go Well. ™  The dough has to ferment for a few days to build up the requisite tang and texture, and the last time we tried it, the dough got blue and fuzzy.  This is NOT the correct color. (or fuzziness level)

But we had to try.  So into a bowl went two cups of teff flour.  Teff is a tiny grain that mills down to a silky soft flour.  That gets mixed with some water and for the recipe we chose, a tiny amount of yeast.  Traditionally, this is a wild sourdough – no additional leavening would be added.  But traditionally when Dan and Leigh make injera it turns blue and fuzzy, so we’re going to duck tradition this time.  The dough is left to do its thing for two days.  Longer would have produced a tangier flavor, of course. 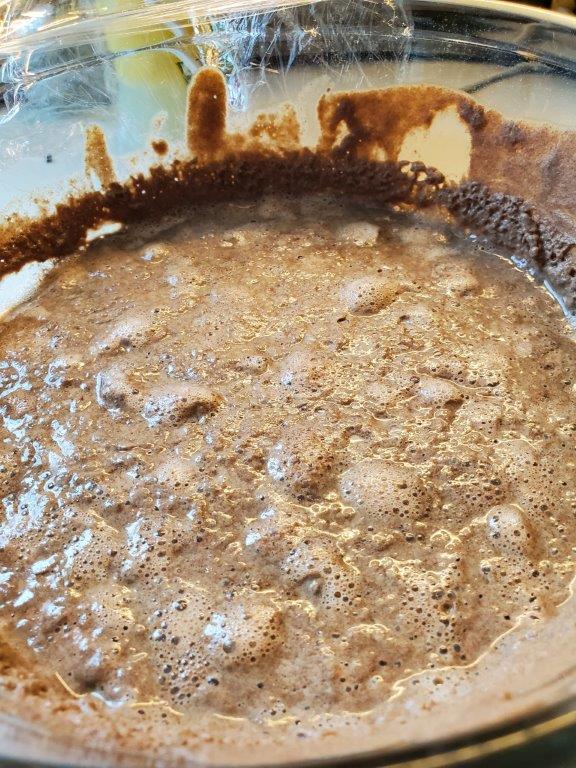 Two days later, the dough was definitely not fuzzy, and it was very active, to the point where it would fizz if you poked it. That was fun, and a bit unnerving.  Toss in some more flour for it to chew on, along with some baking powder and salt, and it’s time to start in on the butter.

In addition to berbere, the other fundamental ingredient in just about every Ethiopian dish is Niter Kibbeh, or seasoned clarified butter.  We made some for Eritrea, and it was OK, but not special enough to include in the post.  THIS time, it went a lot better.  A truly LUDICROUS variety of spices get boiled in butter for an hour to make this stuff. And we didn’t even have everything the recipe called for. 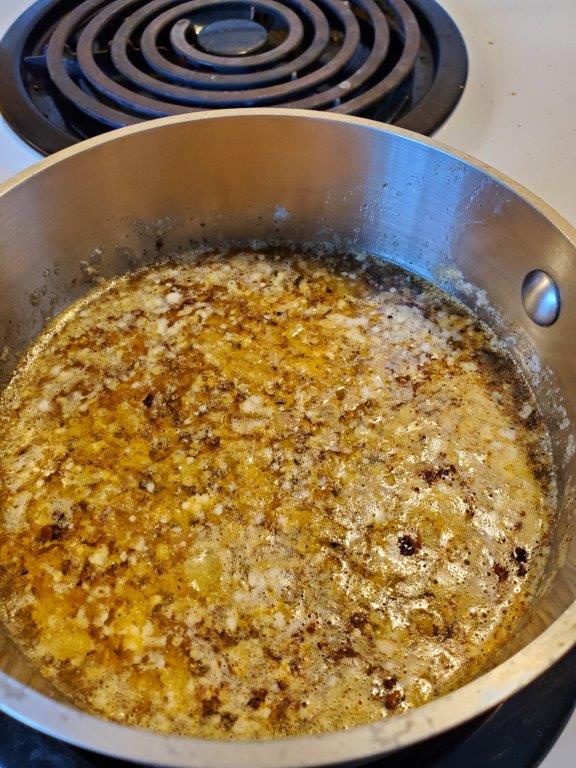 A quick strain through cheesecloth and we were left with a sadly fairly small quantity of amazing smelling butter. 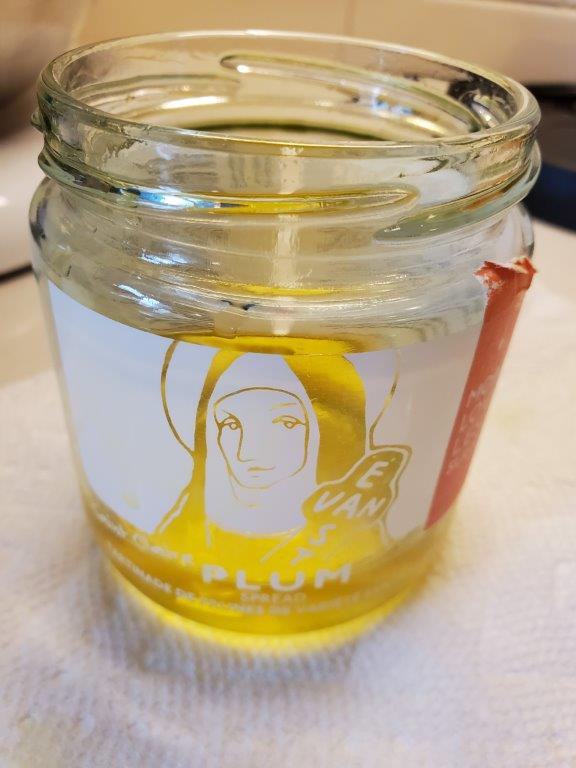 Also, East Van Jam’s Plum Jam is great.  Get some if you run across it.  We used it for the Czech kolaches.

Butter in hand, it was time to start the fairly length process of making Doro Wat, the chicken stew that is frequently referred to as the national dish of Ethiopia.  The way Ethiopian stews get their incredible depth of flavor is from a base called kulet.

First you puree some onions in a food processor to get them down to a paste.  They’re cooked in the butter for 45 minutes.  Seriously – this recipe calls for doing nothing but cooking the onions for the better part of an hour.  At that point, they had started to caramelize, and we tossed in some ginger, garlic, and a bit more butter. 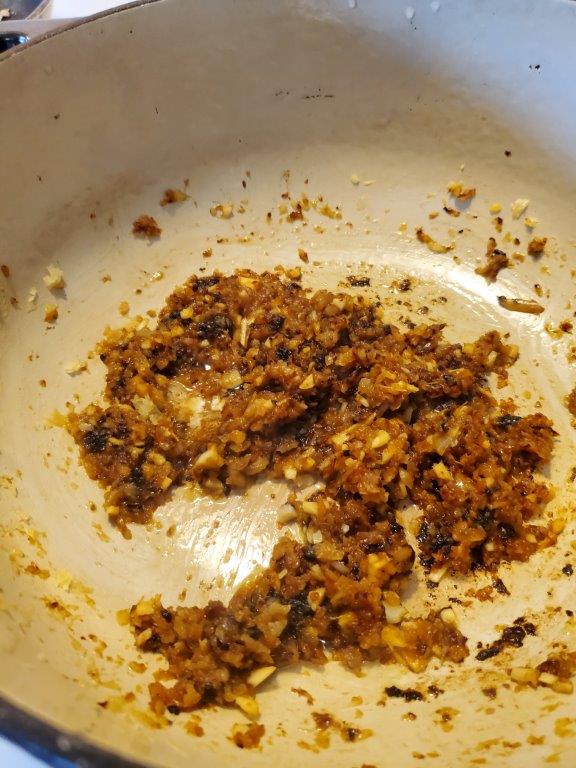 At this point you throw in a quarter cup of berbere and some more butter.  “Cup” is definitely not a unit of measure we’re used to associating with spice blends, especially one as bitey as berbere.  We’re here for it. 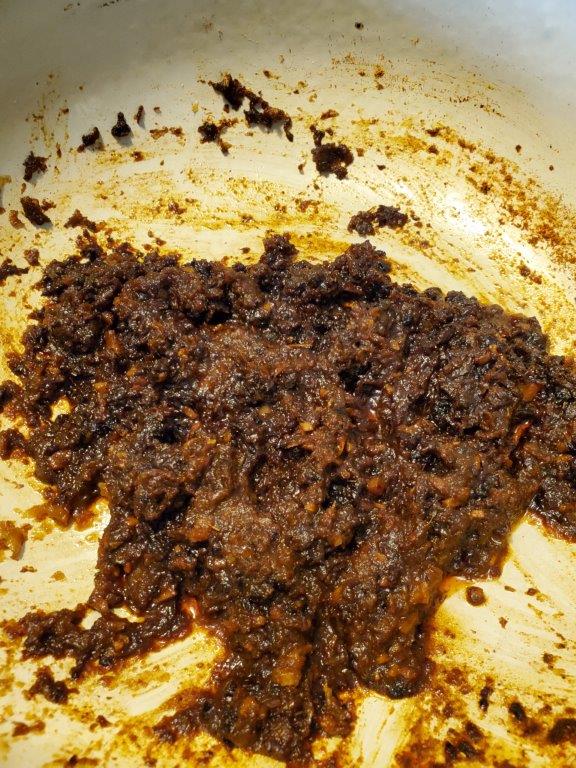 At this point, we have been cooking onions with some seasoning for the better part of two hours.  The kitchen smelled unbelievable, and dinner was still a ways off.  Into the pot goes the chicken, some stock, and in theory, T’ej, or Ethiopian honey wine.  Not having any T’ej, we threw in a tablespoon of honey and some Sauvignon Blanc.

Let’s leave that to cook for a bit – we have two more recipes to make.

First, while we wanted to have a side dish to the doro wat, it was so labor intensive that we went looking for a shortcut for the other dish.  Enter the Instant Pot, and a bowl of red lentils, to make misir wot. 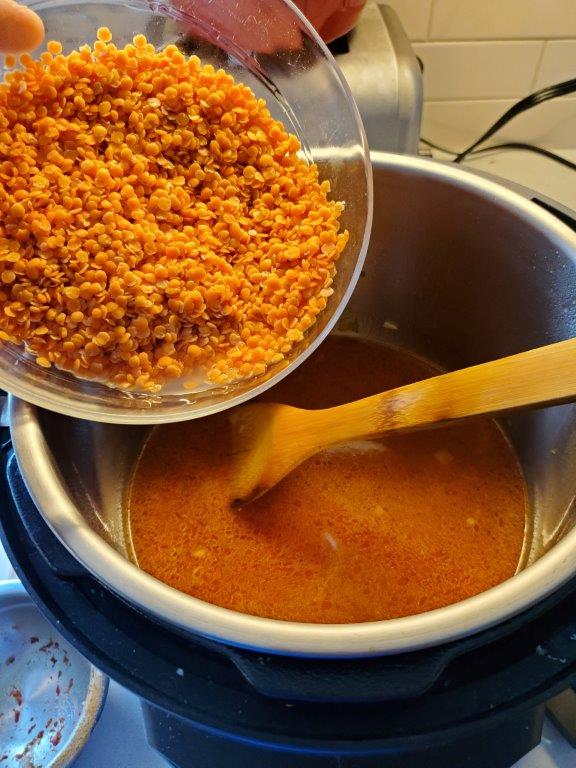 The liquid here is more clarified butter, along with another ludicrous dollop of berbere and some tomato paste.  The instant pot  directions were the usual “Put everything in, close the lid and go do something else.”

In this case, “something else” consisted of making ANOTHER spice blend for the chicken stew. If you’re following along at home, you’ll notice that the recipe we’re using does NOT mention this, but it was common enough in other versions of the dish that we wanted to include it.  This blend is called mekelesha, and is the second most widely referenced Ethiopian blend after berbere. It is used as a finishing blend, similar to garam masala in some Indian curries.

So we toast a few spices: 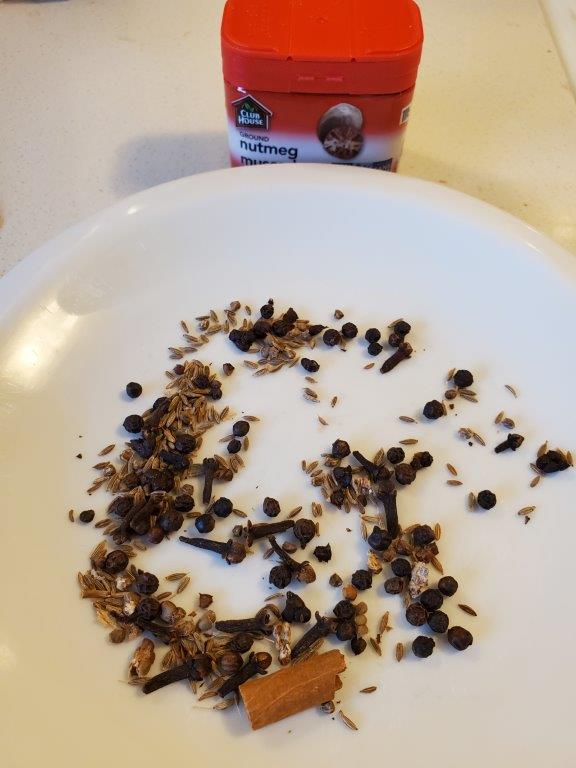 This particular version calls for cloves, cinnamon, black pepper, nutmeg, and black cardamom seeds.  Into the spice grinder, and we get a dark, dark powder. 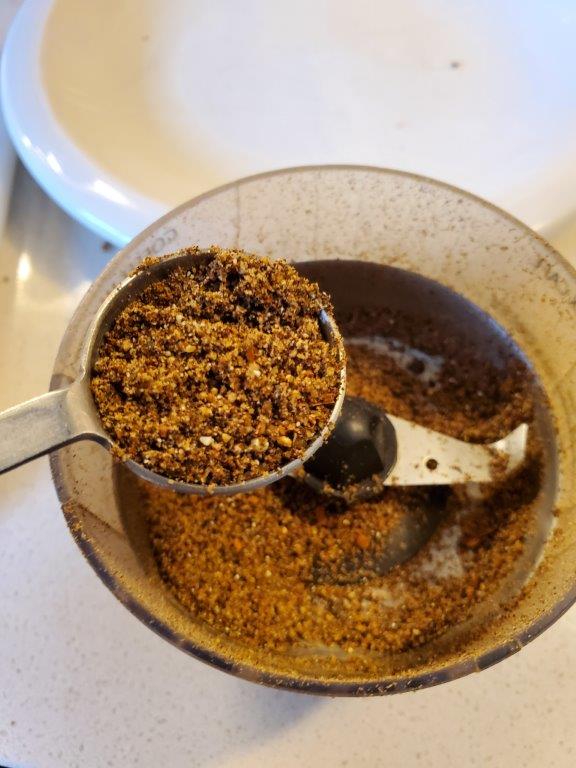 A bit of that goes into the doro wat for the last ten minutes of cooking. 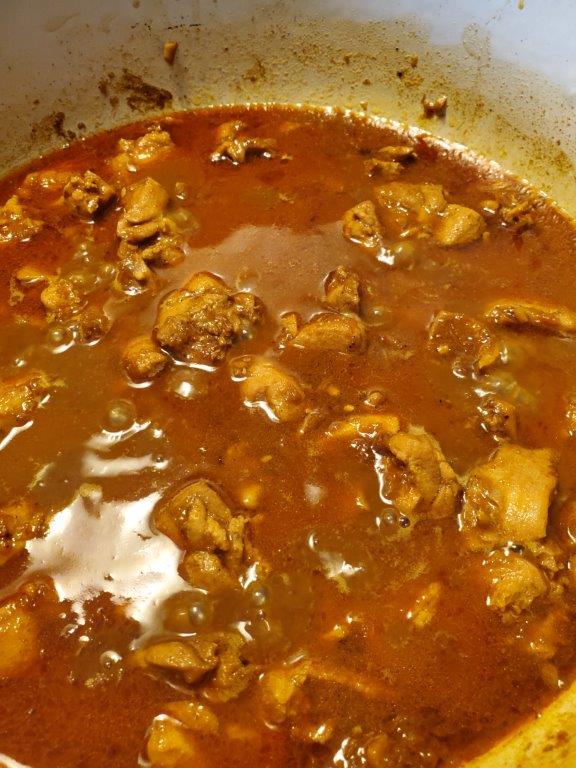 I am drooling just LOOKING at that picture.

We can’t put it off any longer – let’s try to make some injera.  (This actually happened a bit earlier in the day, but is placed here in the narrative to build suspense.)

Could we achieve the requiste spongy texture, with lots of air bubbles? 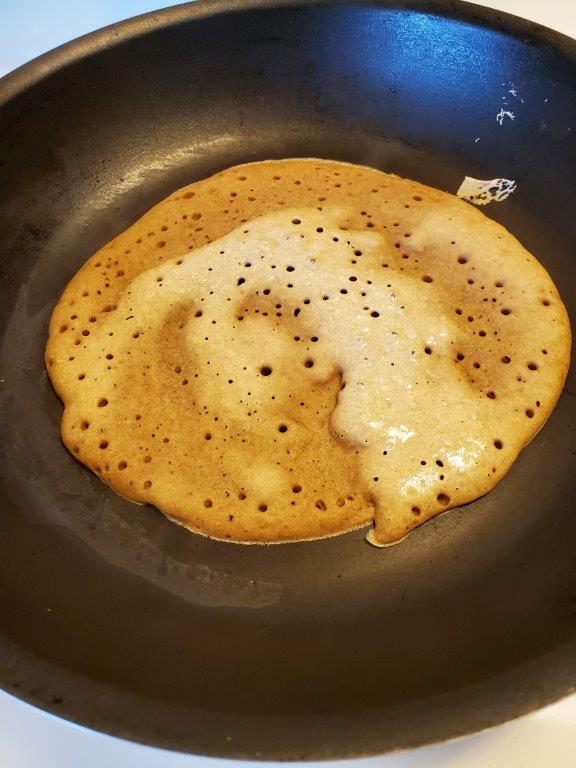 We sure could!  This one’s a bit thick (and not finished cooking), but it turned out pretty great.  Since we were warned they would glue themselves together into a sticky blob if we tried to stack them before they were cool, we worked out an assembly line, where Leigh would ferry each one to towels spread out across the kitchen table as I started the next.  By the end of the process, we had a table full of lovely, spongy injera! 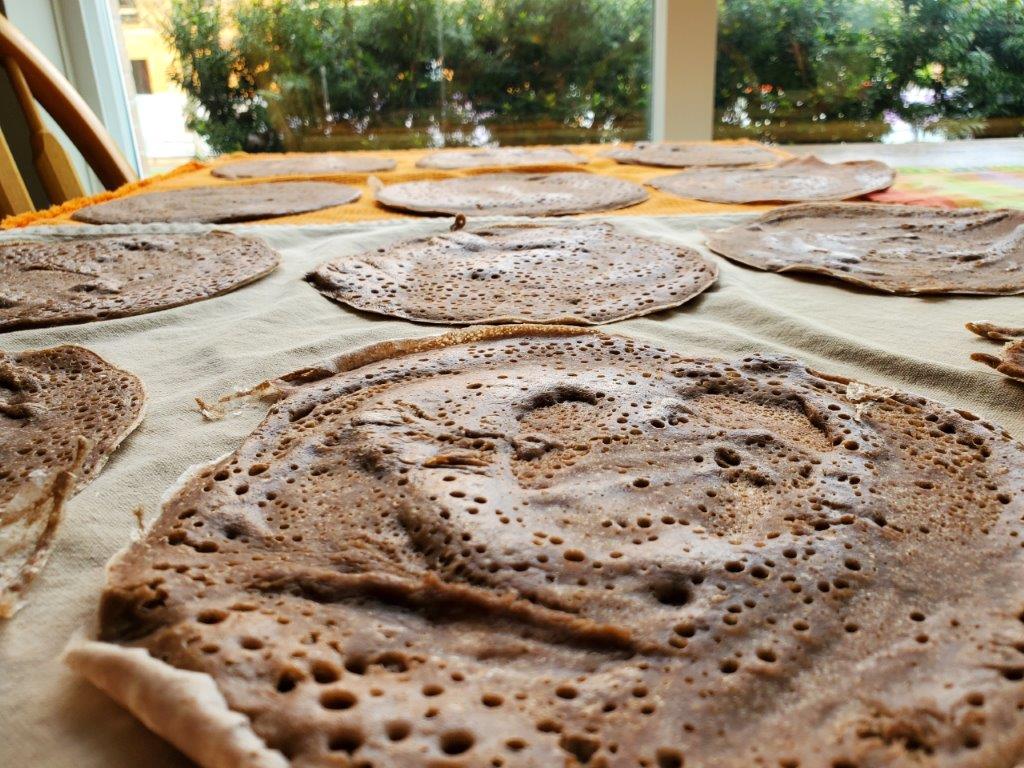 By design, the lentils finished up at about the same time as the chicken, and had reduced to a thick, creamy consistency. 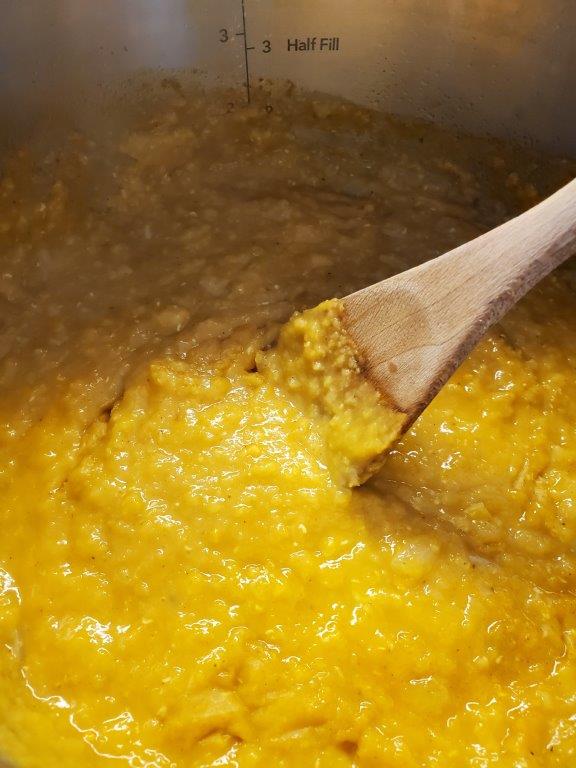 And now for the final sexy shot: 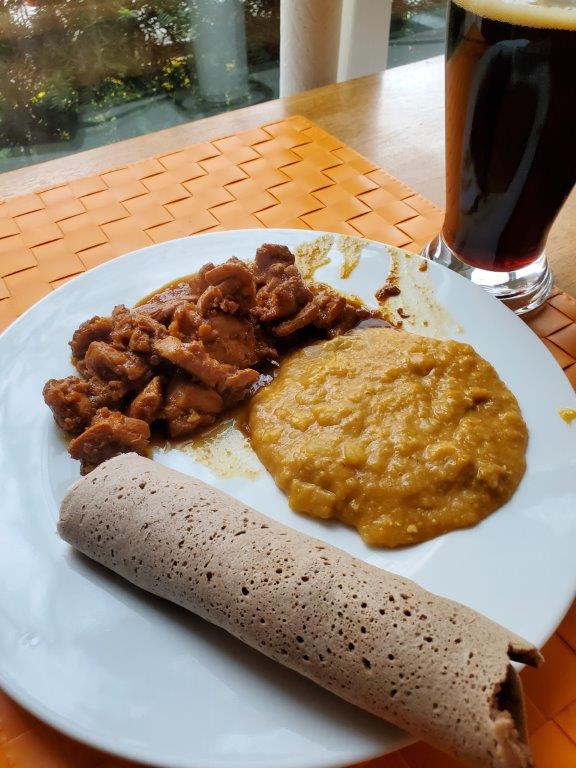 Hello gorgeous.  Get in ma belly.

This meal was stunning. The sheer density of flavor in the chicken stew is impossible to describe – it turns out cooking onions by themselves for the length of Monsters, Inc. makes them incredibly delicious. The lentils were excellent, and the injera worked! It tasted good, and was the perfect texture to scoop up all the lovely, lovely stew.

Next up, our first trip to Oceana, and the island nation of Fiji!