This week, we travel to Costa Rica!  Lots of good news for us on this one.

First off, there is an acknowledged national dish of Costa Rica, so that potential ambiguity is settled off the bat.  Next, there’s a definitive way to separate Costa Rican cuisine from that of its neighbors, which is often a challenge in this project.  In this case, that definitive way is Salsa Lizano!

What is Salsa Lizano, you ask? It’s a delightfully tangy vegetable based sauce that I would describe as “Like Worcestershire sauce, but less fishy and more citrusy.” In more good news, the Latino grocer that sold us the Colombian sausage two weeks ago had this stuff in stock.  And that really IS good news, because this stuff is SERIOUSLY tasty.  We got the bottle a few days before our Costa Rican meal, and had already started cooking with it, because it’s that good.  (Also, the bottle is huge, so there was no risk of running out.)

Finally, there’s plenty of Costa Rican recipes online in English, so we weren’t reduced to the only available recipe from a country in a machine translation from French.  Like last week.

To balance the ease of acquiring the obscure sauce, we had a hell of a time finding our veg.  The recipe we picked out called for chayote squash, which I didn’t think was all that weird.  So we stopped at a few fancy grocery stores around Vancouver to pick one up.  No luck at any of them. We went to the large public market on Granville Island.  No dice.

Welp.  Guess we’ll need a different vegetable dish.  So I walked up to the Sav On grocery store in our neighborhood to get some carrots and green beans…

…where they had chaoyte in stock.  OK, back to plan A.

So here’s our haul of unusual ingredients for this week, conveniently in one picture: 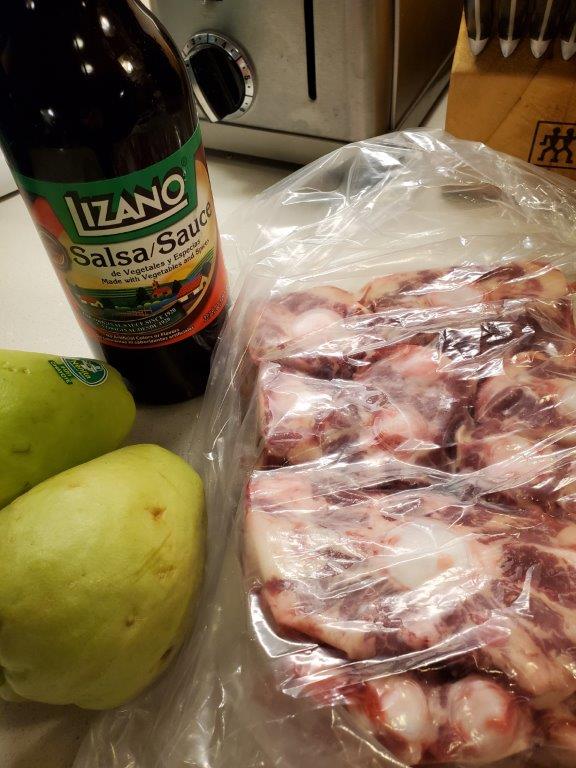 The meat in this case is oxtail, which will be going into a stew.  That’s the Chayote on the left, and you’ll never guess what’s in the large bottle marked “Lizano Salsa.”

So lets get this party started.  First off, what is the acknowledged national dish of Costa Rica?  Why Gallo Pinto! The literal translation is “Spotted Rooster,” but no roosters were harmed in the making of this dish.  Rather, it’s a rice and beans combination that is often eaten for breakfast. Our other side dish will be Picadillo de Chayote, or “Chopped up stuff with Chayote in.”

Both dishes start with a sofrito, which is a fancy way of saying “cook some onions and stuff in fat first.” There are a million different approaches to sofrito around the world, as evidenced by the fact that even these two recipes from the same country had different bases.  The one on the left is the sofrito for the Gallo Pinto, and is made with onion, red pepper, cilantro, and salt in cooking oil.  The one on the right is for the picadillo, and involves onion and garlic in butter. (Margarine would apparently be more typical in Costa Rica, but the recipe author and we shared an “ick” on that one.) Both should probably have been chopped more finely, but whatever. 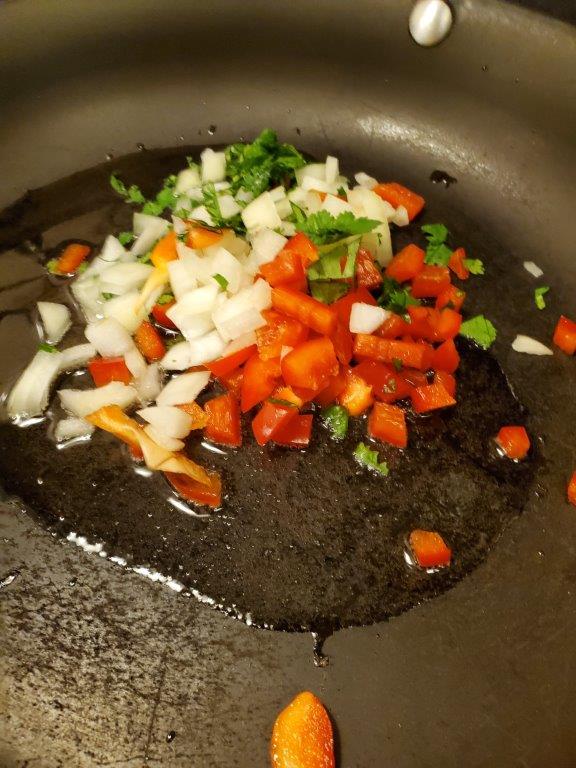 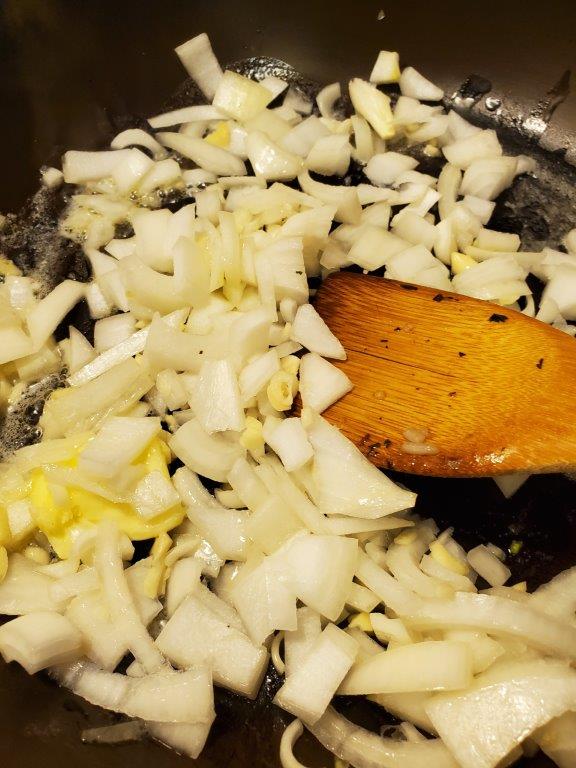 After the two sofritos have… um… sofrited? sofried? soffragated? you toss in the remainder of the ingredients and let them cook.  For the Gallo Pinto, that’s cooked black beans, rice, and Salsa Lizano, and the cooking time is basically just “until it’s warm.”  For the picadillo, it’s chayote and some corn, cooked it down until it’s tender, and then finished with some heavy cream. (not pictured)  What IS pictured is that we scorched it a little.  Oops. 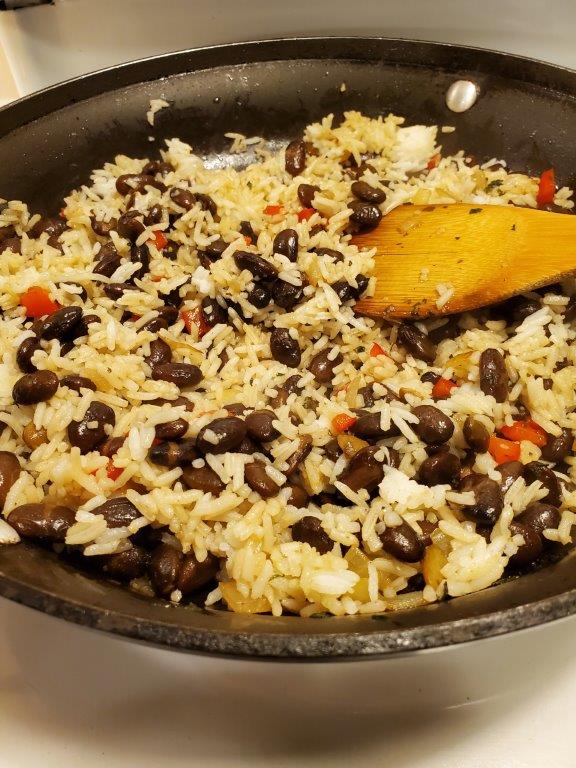 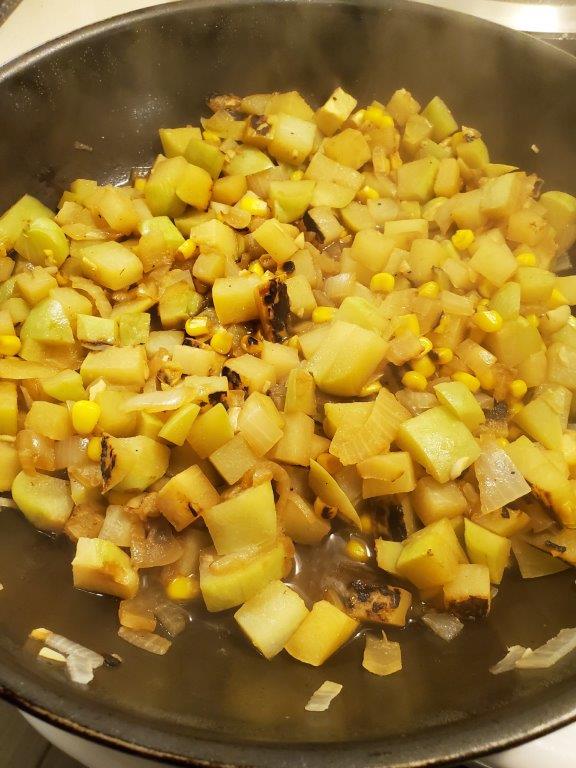 OK, what about our meat dish? We’re going to use a pressure cooker so these oxtails don’t take forever. In they go with a few aromatics that, oddly enough, are not actually in the ingredient list for the recipe in question.  Fortunately, it was all stuff we had on hand, like onion and garlic, but it’s a weird omission.  After the pressure cooking, but before any other seasoning, the meat looked like this: 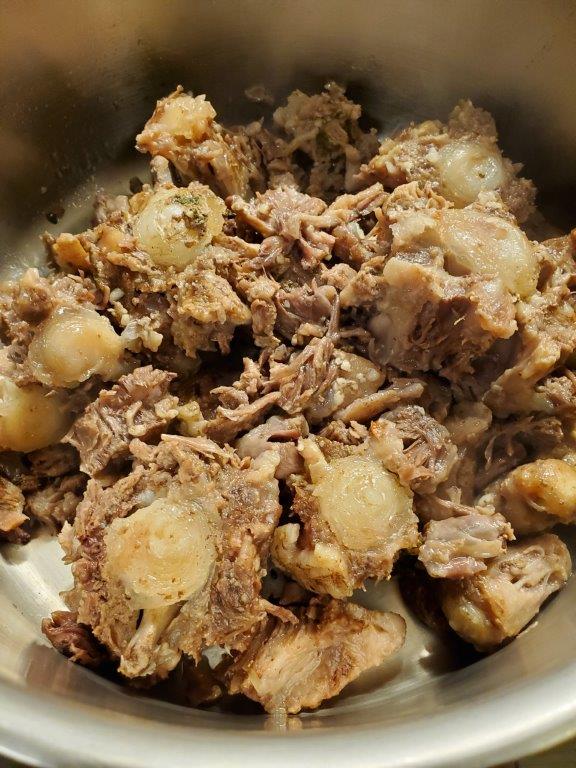 For seasoning, we pulled out a few cups of the broth from the beef, and mixed it with tomatoes, onion, cilantro, garlic, soy sauce, more Salsa Lizano, sugar, and ersatz ketchup.  (The recipe calls for it, we didn’t have any, so we used tomato paste and little more sugar.)  All this gets combined in a blender.  Or at least, it would, if we had a blender.  Instead, we demonstrated once again why a food processor is NOT THE SAME THING, at least for liquid ingredients. 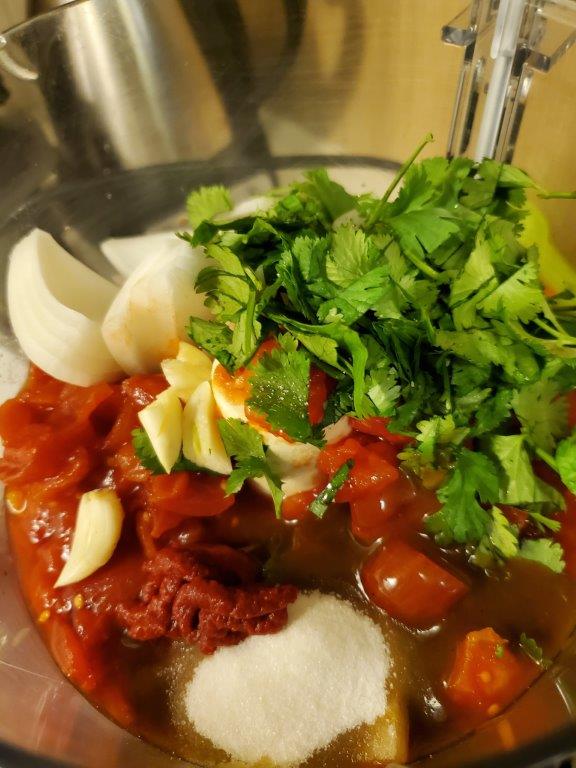 But it didn’t make THAT big a mess, and after we mixed up the sauce (and cleaned up), we put it and the beef into a pot for a quick warm-up.

The final meal is what is known as a casado in Costa Rica.  Literally it means “married man,” and the origin is either that restaurant patrons asked to be fed like their wives cooked for them at home, or that the rice and beans are married to the other dishes, since they are always served together. A casado most often has the beans and rice separate, but serving Gallo Pinto instead is apparently fine, and weren’t NOT going to make the national dish.

So here is our happily married casado: 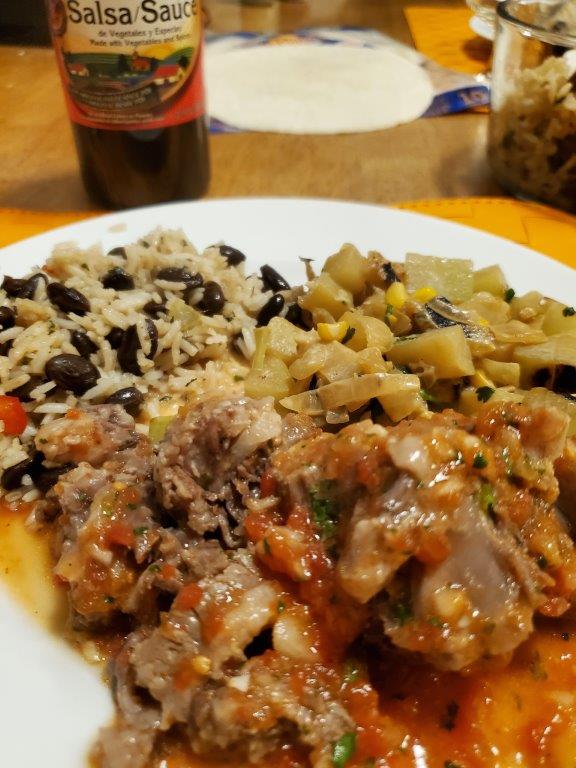 And the verdict on taste?

This meal is the bomb. Or maybe it slaps. Or it slaps a bomb? I don’t know, what are the kids saying these days?

We need some sort of metaphor at this point, because this was simply too good to just say “it’s really good.” All of these recipes could make there way into our regular rotation, and the oxtail stew in particular was f-ing amazing. The combination of spices in the sauce were tangy and tomatoey and citrusy and sour and rich and incredible, and the oxtail just soaked it right up.  The Gallo Pinto is probably one of the best versions of beans and rice I’ve ever made, and even burned, the chayote was creamy and delicious.

And while each of these dishes was fantastic individually, they also blended into a whole that was greater than the sum of the parts.  We used the toritillas in the background of the photo to wipe up every drop on the plate, and the leftovers are NOT going to end up in the compost after a week, that’s for sure.

So, Costa Rica, y’all have some amazing food.  We’ll be making this stuff again, and that bottle of Salsa Lizano is not going to go bad on the shelf, either.  Next up, Côte d’Ivoire!