And so, we come to the end of the “C”s!  Amazingly, it has taken almost precisely a year of calendar time – Cambodia was February 9, 2020.  Of course, February 9, 2020 was  A BILLION YEARS AGO.  Remember Australian wildfires? Or, you know, other people?

But we’re going out with a tasty meal, anyway.  We’ve both actually BEEN to the Czech Republic, which makes it only the third country on the list for which that is true. (The other two being Belgium and Canada; Leigh but not Dan has been to Austria.) If you would like to read about our exciting adventures in the land of Smetana and Pavlov, you can start here.  Our trip included a food tour, and we’d definitely recommend it to visitors to Prague once the apocalypse concludes.

The national dish of the Czech Republic is pečené vepřové s knedlíky a se zelím, or Roast Pork with Dumplings and Cabbage. We are NOT going to be using the Czech spellings for things more than once, because diacriticals are HARD, y’all.

So there’s three things here – dumplings, cabbage (in the form of saurkraut), and pork.  Let’s start with the dumplings, since they were the most work.  Right off the bat, we run into the only new-to-us ingredient this week: Instant Flour! 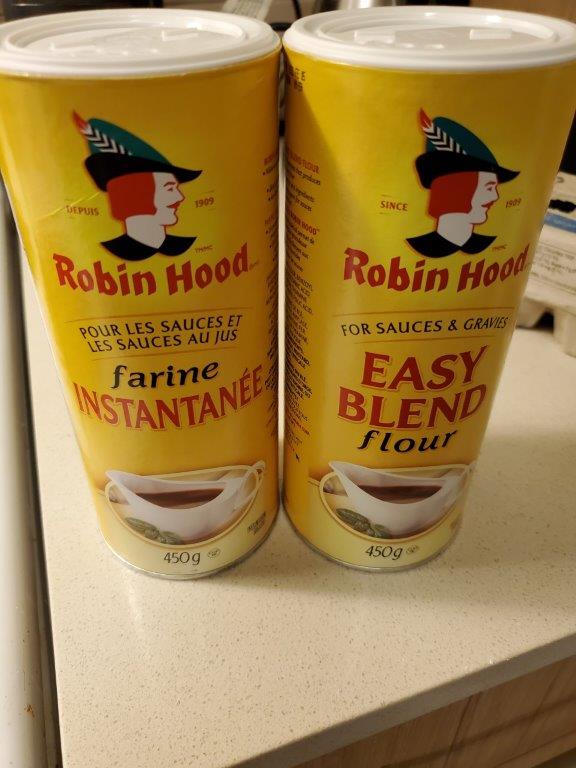 Sold under the brand name “Wondra” in the US, this is apparently flour which has been pre-cooked and has a coarser texture than regular flour.  The Czech person who made the video we were following was insistent that all-purpose flour would NOT give the right texture for the dumplings.  And who are we to argue with a Czech person on the internet?

The interesting thing is that apparently this stuff is regularly available in just about any supermarket, and we just never noticed it, because we never needed it.

So using the instant flour, you make an otherwise standard yeast dough, and then leave it alone to rise. 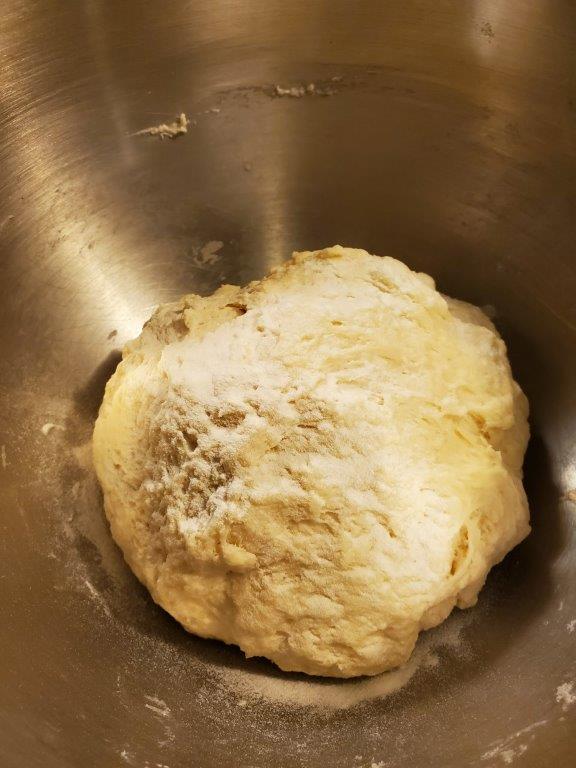 Once it’s risen, you divide it into three parts and shape them into cylinders: 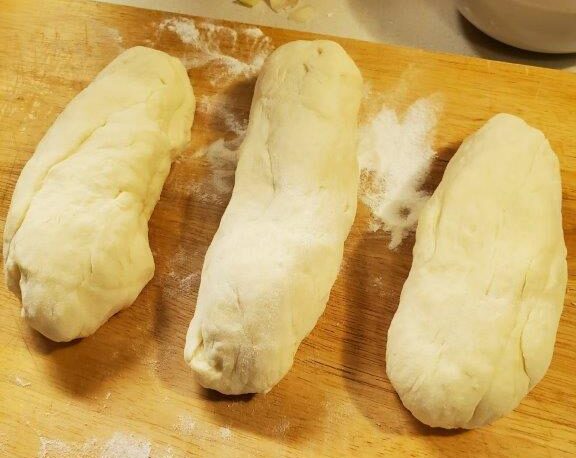 Not super pretty, but then I never actually claimed we knew what we were doing.  And at any rate it doesn’t matter.  Because the next step for these dumplings is to be steamed, and they only JUST barely fit in our steamer.  Which means that AFTER steaming, and the concomitant volume gain, they were going to be shaped EXACTLY LIKE the steamer: 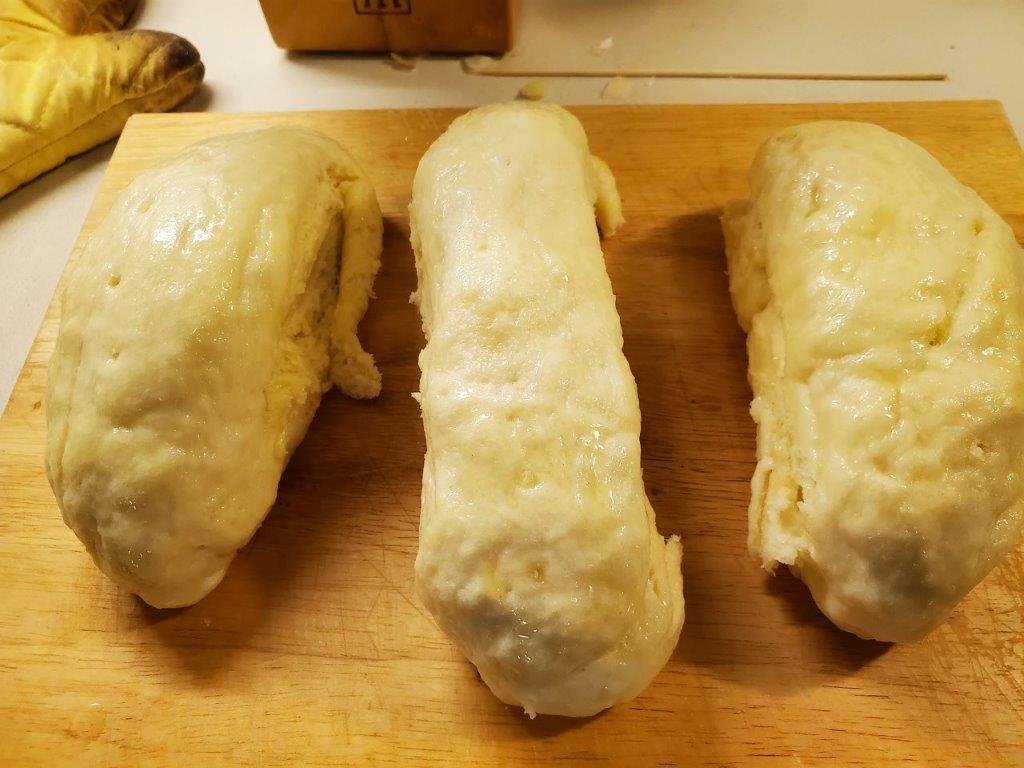 However, while the appearance won’t win any prizes, the texture turned out just about perfect – just the right mix of chewy and bouncy.  You’ll see them sliced up down below.

The Czech take on cabbage is actually quite different from a lot of other places.  We STARTED with a tub of pickled cabbage that we could very easily have just donked out on a plate and eaten as is.  We then added salt, caraway seeds, and a surprising amount of sugar.  This got cooked for a good 30 minutes or so. 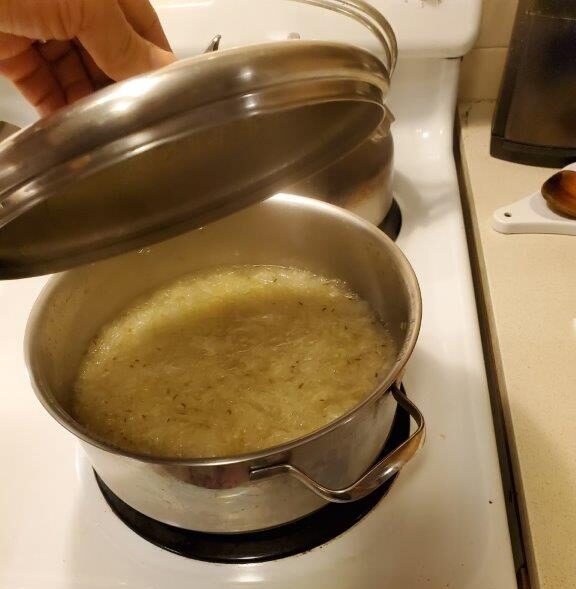 While the sugar was soaking into the cabbage, in another pan we browned some onions in oil.  And the recipe is not kidding about browning – you cook them for a good 15-20 minutes. 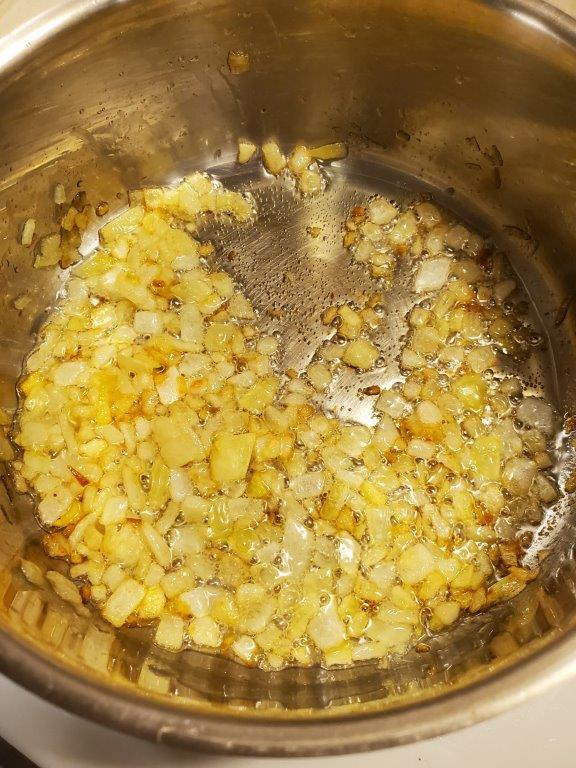 One the onions are cooked, they get thickened with (regular) flour to make a roux, and that gets dumped back in with the cabbage.  The whole mixture is then cooked for a bit longer so it becomes a thick, sweet, cabbagy sauce.  Very different from the sharp kraut that gets put on hot dogs at the ballpark.

Finally, let’s talk pork.  It is a running joke between Leigh, I, and… well pretty much anyone who, you know, likes food, that any time a recipe calls for a single clove of garlic that there must be some mistake.  Surely they must mean a head of garlic, right?

Well, this recipe DOES call for a head of garlic. 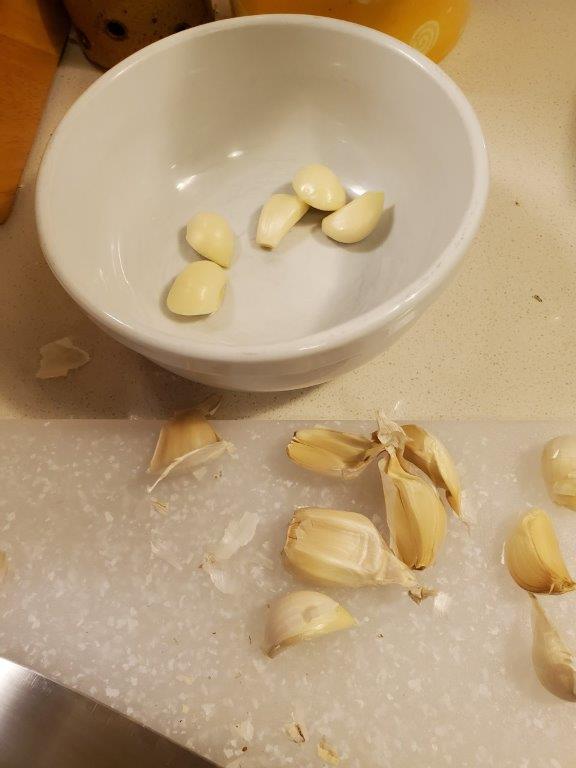 We do love us some garlic.  Maybe not PEELING an entire head of garlic, but it’s a small price to pay, right?  In addition to the garlic, the only other seasonings going into the pan with the pork are an onion, some salt, and caraway seeds. Cover with water, and you’re done with prep.  The pork is by far the simplest dish on the menu tonight. 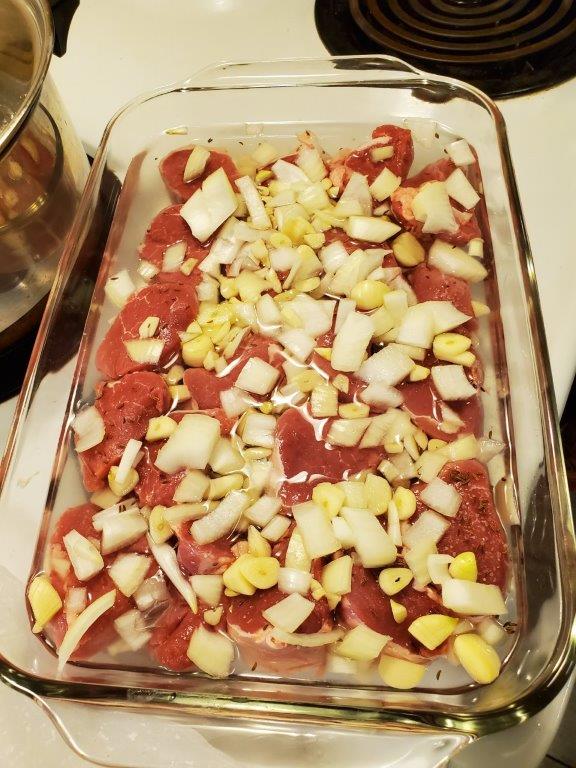 The only fussiness is that you have to flip the pork chunks a few times during cooking.  Which, honestly, is not that fussy.

And that’s it! Pork, sauerkraut, and dumplings!  This is ALSO the first country we’ve done since Belgium (and Canada, of course) where we’ve been easily able to run down to the neighborhood liquor store and pick up beer from the country in question. Although we did learn on our food tour that the Pilsner Urquel that gets exported is NOT really the same as what you get if you order it in the coutnry. 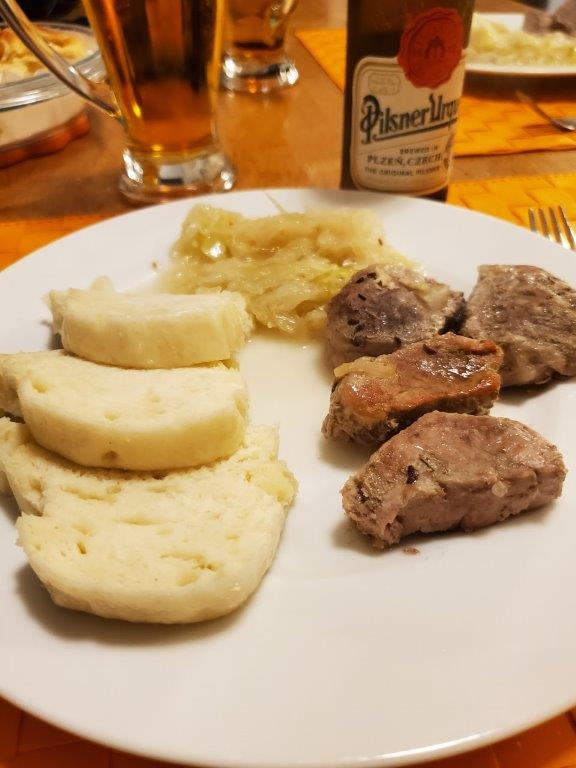 Still – ain’t that purdy?  Honestly, this plate should have had more cabbage, and it shortly DID.  This is not a meal for people who want carefully delineated zones of food on their plate.  This is a meal for slopping everything together, and trying to get some dumpling, pork, and cabbage in each bite.

And the cabbage really was the star of the show – the sweet, thick, saucy cabbage mortared the pork and dumplings into a whole that was definitely greater than the sum of its parts.  The meal would definitely be one I would prepare for guests who I LIKED, and wanted to FEED, not necessarily impress with artsy presentation.

And – there was desert!

Kolaches are a traditional Czech pastry that consists of a puffy dough with a variety of possible fillings.  This was actually the fussiest of all the things we made – some versions of this recipe (not the one we used, of course) can require up to five separate rises! The dough itself is quite rich and reminiscent of challah, using milk, butter, and eggs. It’s also very soft. 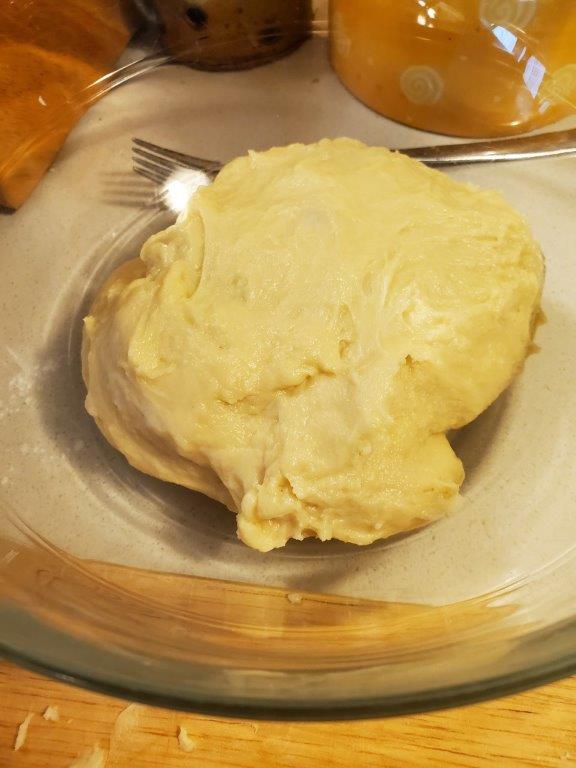 After the dough has risen, you shape it into little balls, put them in a pie tin, and then let them rise again. 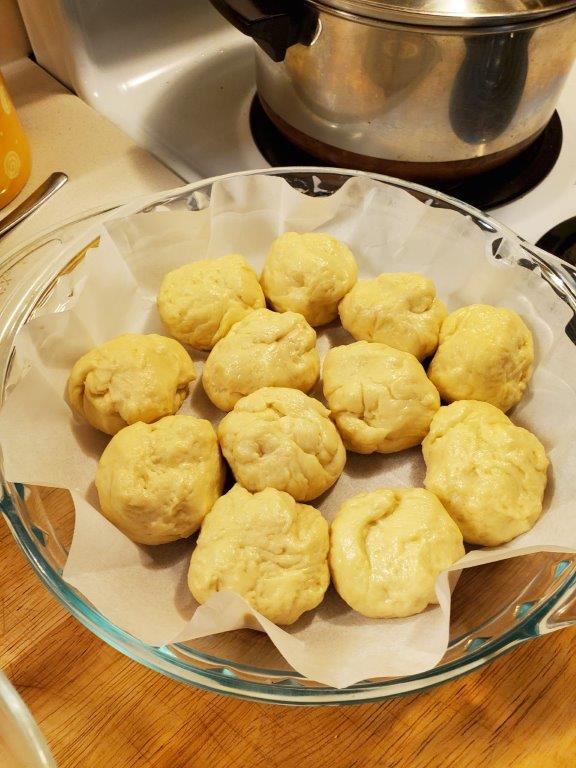 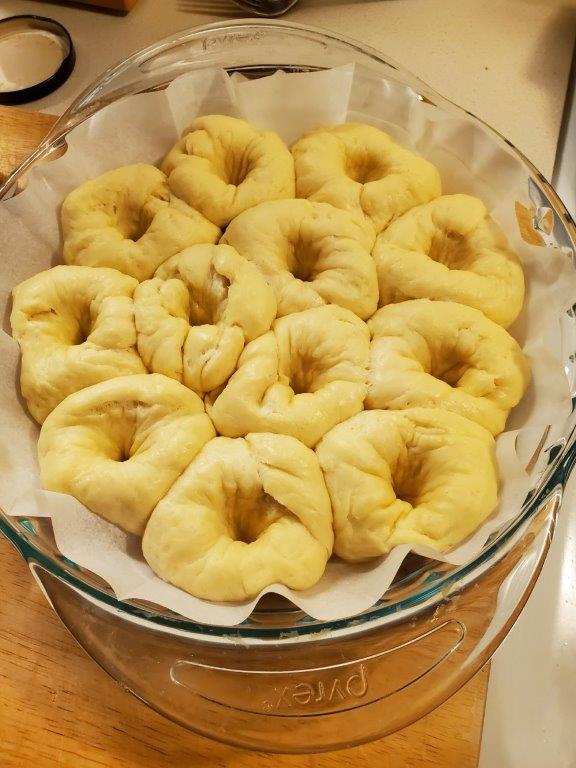 The holes in the “post rise” picture are not some weird artifact of the rise – we pushed those in on purpose.  Why did we do that?  Fillings! Tasty, tasty fillings!  There were a number of possibilities, but we went with three very traditional ones – sweetened cream cheese, apricot, and plum. 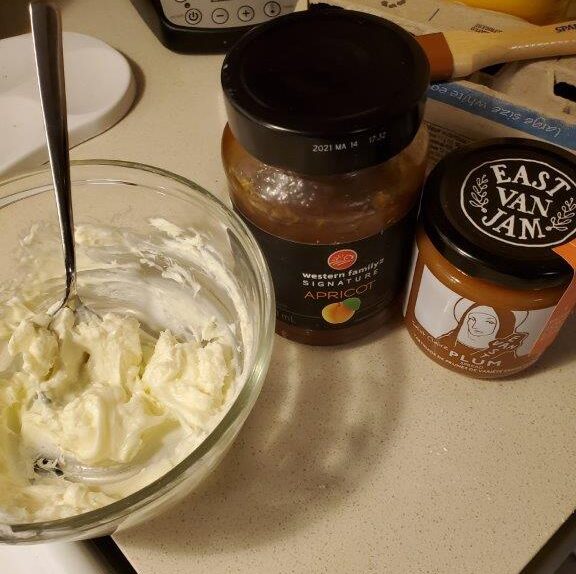 Fine, Czech pedants – we are aware that PRUNE, not PLUM is the traditional filling.  Close enough, and this plum jam (also purchased on our market trip) is amazing. A quick egg wash and bake, and this was the final result: 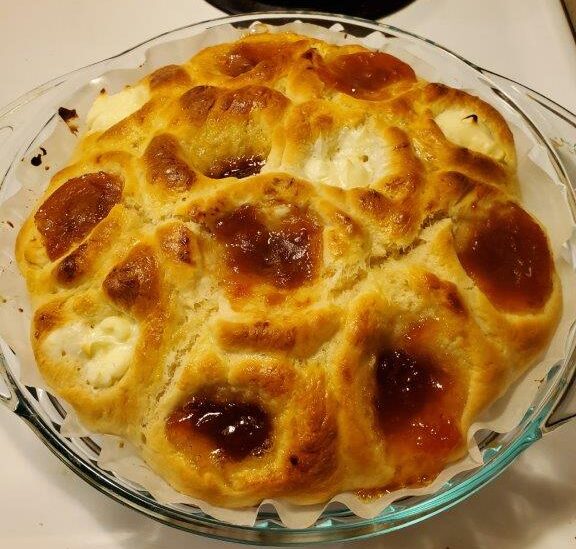 And seriously – what is not to like here? Soft, chewy, pastry, and sweet gooey stuff in the middle.

Czech Republic – your food is tasty, your statuary is very weird, and we salute you for both.

A note on the recipes for this week – the recipes for everything but the Kolaches are extracted from videos on the website “czechcookbook.com”.  Since videos are really annoying to cook from, I transcribed them, and will include both the transcribed text and the original videos.

Next time, we start the (much shorter) list of “D”s with the Democratic Republic of the Congo!